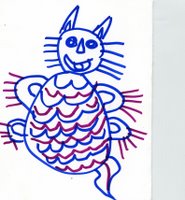 What on earth has happened to dispel the fear?

For several days now I've been in a strange state where even the awfulness of the images from Heathrow Airport in England fail to register on my psyche. It's as though I've crossed some kind of divide, leaving behind the normal sensations that nature provided to protect me. Have I simply stopped believing those voices screaming from the media? Have I entered a kind of Oz-created "behind the curtain" place where the Wizard prevails but where truth has neutered him into submission?

All of the signs are present that should trigger the fight or flight response -- but they're not working ... and I have no idea why. Surely the possibilities are strong that something awful can and will happen -- that those terrorists will strike in some dramatic way that will take many lives ... and that this nation has surely been guilty of enough terrorist-producing atrocities to invite retaliation ... then why? Why am I not as fearful as when I wrote the last entry some days ago?

The fears have all dropped away by some kind of magic -- and I can again watch Keith Olbermann with dispassion, suspecting that he, too, may be topping out into this state of disbelief. But -- do you suppose this kind of cynicism can be lethal? Maybe that's why I choose to watch the news filtered through satire -- through Jon Stewart.

Have the terrorists on our side (Rove, Cheney, Bush, Rumsfeld, Gonzales, et al) finally lost their ability to convince me of the truth of their warnings? Is it all simply too conveniently Blair/Bush? Was it all too close to the upcoming November elections and the Connecticutt primary and the Leiberman loss and the Israeli failures in Lebanon to not be suspect? Has it all become so predictable that there is no longer any credibility and that I'll die along with the rest in some horrific holocaust -- but with an attitude of both helplessness and fatalistic acceptance?

But shouldn't that shoot me past the top measure on the screaming panic meter?

Why don't I any longer believe them?

Have they finally lost their power over me -- and others as well? Have they overplayed their hand at last? I can't believe that I'm alone in this ... I may have finally been desensitized along with millions around the world -- perhaps on the eve of our re-awakening ... ?

Photo: Another of Dorian's quirky cat sketches. It may be a little over the top, but in a way it depicts the weirdness I'm feeling right now -- just a tad nutty!

Posted by Betty Reid Soskin at 10:31 PM No comments: