Observations on a theme that may explain the disembodied rage I sense in my city and others like it -- and that's killing more of our young with each day ... .

Mike: I recall commenting some years ago that it was my perception that the Black Movement had become suicidal. It seems beyond doubt to me that the rage and self-contempt that lies beneath the machismo are being destructively played out at some subconscious level. When one thinks of the confusion that must underlie all that ferment -- the fact that one is legally and morally prevented from acting out the anger against those who would wield the clubs against you - or to attack those faces that pretend to support while unable to completely mask the deep fear of you that they feel ... . The obvious answer may be to internalize the hatred and wait for the end. But no one processes all that intellectually, so self-destruction is predictable and increasingly a fact of life in our communities.

Maybe the drugs -- imported to your neighborhoods (as you really believe) by those who would use crack cocaine to pacify the ghetto -- make the days livable at least in those few moments right after the last hit. But the hopelessness is there in the few minutes between hits and you're aware, once more, that you are needed nowhere on earth.

Often your mother -- in the effort to provide for her younger kids -- has had to turn you out onto the streets when you've aged out and are no longer covered by the family's welfare check. Your indequate schooling has prepared you for nothing that will support you or your girl and her child. You cannot compete with the regular check Uncle Sam provides each month to take care of them both. If you choose to participate in her life at all, that assistance will cease and neither of you will be capable of sustaining yourselves on the minimum wages offered by Macdonalds. The only place where your street smarts are useful is in the drug trades -- the only visible avenue to independence; but even that's a blind allley. You know that your life expectancy is limited and that death or prison will be the only ways out. The only option you can see, often, is who to take with you ... .

Then, you find that you are needed after all. Society has now created the grandest state and federal human warehousing program in the world. It has created a huge bureaucracy that feeds upon itself through an industry that provides others with jobs in security, supplying denims, towels and sheets, and guns and uniforms for those hired to guard and to punish you -- and a stock market product that now places the prison industry high in the Dow Jones daily ratings, the morbid effects of privatization. Thirty thousand dollars and more per year are now being spent to contain and control you -- someone few wanted to educate. Yale or Harvard will have to get in line -- the prison system has first dibs on all those dollars, and on your life.

Then the day comes when you're walking down the street or hanging out on the corner with friends -- shooting (no more than) the breeze. There are five of you just getting through another day. Someone approaches on the sidewalk, walking toward you. That person avoids eye contact. About 50 feet before you're close enough to smile reassurance, he/she crosses over to the other side, obviously in fear. What that person doesn't know is that this is the sixth (10th?) time this has happened to you this day. And only an hour ago you were followed throughout the clothing store where you stopped to buy a new oversized hooded black sweatshirt and some new shades with the cash left over from your last drug transaction. The store detective followed you doggedly fully expecting you to lift something and for the action to begin. And that store detective doesn't know that you were the All-Star center on the highschool basketball team last year (before you had to drop out because you passed the age to be counted in the family as a welfare recipient and they couldn't afford to keep you at home any longer -- and you're on the street), and that you've become the provider for your family, supplementing welfare checks through street deals in the underground economy.

...and you can't go home to confide in your young "wife" because for her, too, you're now a liability. The social worker may find you there and your baby's welfare will be threatened.


Posted by Betty Reid Soskin at 2:57 PM No comments: 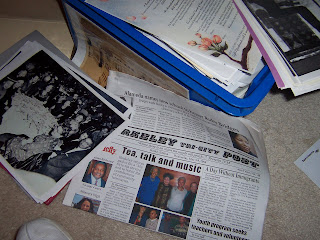 This has been the longest hiatus from being online than ever before in life ... .

And what have I done with the time, you ask?

So much, but mostly I've rediscovered myself from other eras while cleaning out boxes and crates of "stuff" accumulated over a lifetime; yellowed into umbers on newsprint guaranteed to escape this life maybe even before I do. Fascinating writings that leave me wondering why I didn't realize my ability to put into words so many (what turns out to be) really profound thoughts and concepts.

I've found enough brief pieces of "Bettyness" to fill this blog for weeks to come, and I'm delighted to have had the time to find them after all of the years of unbelievable busyness. Perhaps I have need to give thanks to my frustrating Internet provider after all. Without this extended period of being offline -- it all might have continued to sit in piles in the backs of drawers, file cabinets, and closets never to have seen the light of day until I died and it was all gathered up and tossed by those with little reason to explore them for whatever value they might hold.

Many were written in short pieces to online "strangers" in Seniornet who became so important me throughout the 90s and beyond. Because of the limitations of space on bulletin boards I developed a kind of talent for brevity that seemed to lack nothing by way of meaning. It is this that most impressed me as each was revealed in the exercise that started out as a kind of absent-minded effort to cut down on the clutter of paper that was becoming impossible to live with.

Unfortunately, the pile of to be tossed trash was a total failure as I began to read and re-read clippings and brief personal essays. The answer may be that I can toss them as I type them here, right? That way I'll have the best of all worlds by holding on to the best of them and cleaning out the clutter at the same time.

Maybe I can find even photos to go with them as I post ...

Fortunately, most are dated though there is no way to get them into sequence at this point. But since my blog has been a hodgepodge of impressions written and experienced out of sequence anyway, someone else may someday give the notes some order. Maybe not. But it won't matter since I'll be long gone and perhaps someone will have proven beyond the shadow of a doubt that time is meaningless anyway -- and that the only thing that matters (as I've always known) is this moment; . now, and that all else is illusion.