(National Institute for Artists with Disabilities) this morning and drove away with the first signs of depression. Couldn't decide what to do with myself with no destination in mind. Haven't been this open for many years, which is a way of saying that I had nowhere to go. Have never been the StarBucks type. With home the likely place to head for at the moment, I find myself sitting here at my computer with nothing of note to report. 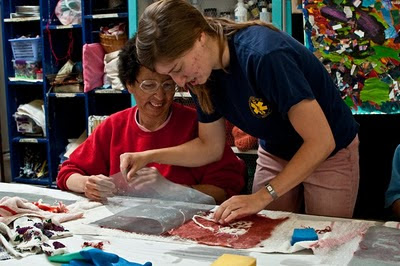 The phone rang, "...this is Marilyn. Wanted to report that Maury (the man who met with us on Tuesday) has agreed to contribute to the Barbara Alexander Academy and has suggested that he will seek matching funds from Chevron/Texaco as well." "I'm having a dinner on Thursday next for other contributors and wondering if you would join us?" Agreed. The work on this remarkable charter school must continue. I, of course, accepted, and wondered if I should tell Marilyn how important this call was to me? She pulled me back into an unknown future by setting a date for me to pin myself to.

It's always been true that I need options. I can be comfortably alone only if I have a choice about it. At those times when I'm at loose ends with nothing to do -- slipping from chair to chair and watching "television" instead of specific programs -- I experience loneliness. But, if the phone rings and someone at the other end of the line asks, "...want to go to a movie?" Then, and only then, I can say "no, I plan to spend the evening doing laundry (or a report, or writing, or doodlin')," and at that moment I've chosen to spend the evening at home, alone. It's having someone present an option that makes the difference. Funny. It's always been so. Marilyn had innocently presented the option that transformed time into a living space.

So now that I've chosen, I'm writing here and planning to spend the afternoon making calls and updating my calendar to include new items more closely related to my new open schedule. Lunch with Mindell, another with Michelle, and still another with Isiah are new items. Talk with my broker about my portfolio and the need to begin to transfer dividends into my checking account instead of redepositing. Practical things now must move to the top of my "to do" list. Must contact someone to finish hauling possessions out of the storage place so that another monthly bill can be eliminated. So I'll be a little crowded -- maybe a yard sale?

Has anyone else on earth accumulated as much paper as I? Time to plug in the paper shredder and rid myself of records that go back beyond 7 seven years (isn't that the legal time allowance?). That should take up several days of browsing and tossing, a task I've delayed far too long.

Who knows what gems may turn up among the debris? Or, just how much garbage I've been hoarding for lo these many years ... .

Maybe I've found another compelling activity, at least until another Marilyn calls ... .
Posted by Betty Reid Soskin at 11:50 AM 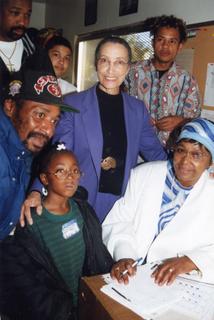 Changes are hard enough to deal with when they're the result of one's own doing, but when they're brought on by forces beyond one's control ... well, that's a horse of another color.

On Monday State Senator Perata's office called to say that "the senator's not ready for prime time." With the Kevin Cooper execution scheduled for next week and with protestors already sitting-in at San Quentin, and with full-page ads being placed in the national press by the anti-death penalty forces, I suspect that the issue is just too controversial to take on at the moment. It means that the 60 Minutes interview team has come to town to do the initial background interviews in preparation for the Stan Williams segment, but that there will be no announcement of a bill on the moratorium. Since we've passed the deadline for bill submission for this year's session, it wouldn't have been introduced until after September, anyway. Timing didn't work out. Therefore, Ed Bradley is not scheduled to arrive until around the 23rd of February.

Today Barbara left for the Pan African Film Festival in Culver City and a series of meetings arranged by Tom Hayden to follow on Friday and Saturday. Declined the invitation to go along (despite the fact that Blockbuster is picking up the tab) in the interest of updating my resume and getting the word out -- in the event that someone has an available position. Crazy? Maybe, but I really can't afford to be idle for long or I'll have to start drawing on dividends and reducing my investments prematurely. There isn't too much in reserve and Dorian's expenses grow with each month (this week brought the announcement of another rent increase). A couple of days at the Beverly Wilshire wasn't all that easy to walk away from, though. That was probably my last chance to do "luxury beyond reason!"

There will be a screening of "Redemption" in Sacramento for members of the legislature sometime before the television airing in mid-March. Will be helping to set that up over the next week or two.

Next week will be emotionally draining. Plan to attend the vigil for Kevin Cooper at San Quentin. Will join with others -- probably not on the night of the execution though, but on the night before. It's just too painful to be present at the gates that night. If I can find it somewhere on my hard disk, I wrote a description of that experience. It's hard to explain just why I feel drawn to such actions, but I am. To have a life taken in my name (and yours) should not be taken casually. To place oneself at the scene sharpens the awareness of just how inhumane an act is capital punishment. for the USA to be so far behind the rest of the world in outlawing this murdurous practice defies logic. But then death of young people through war is still beyond my understanding, too.

With the 9th Circuit Court still deliberating his case, Stanley Williams is at least a year away from his execution date (with luck), but having met him and seen his transformation -- having worked so closely with Barbara on his behalf over the past 4 years -- I cannot imagine what it will feel like to experience the effects of his execution on us all, when and if that day comes.

There have surely been unbelievably horrific acts committed by twisted individuals who must be shut away from society for the balance of their lives. "Life without the possibility of parole" is justifiable. That I do believe. But to kill in order to discourage killing makes no sense. The State (being me and thee) has not the right to take life. If one is capable of dropping the pellet, or, personally performing the act of giving a lethal injection, then I suppose the aversion that I feel is my problem, alone. But, there is no virtue in committing such acts in the aggregate if we would be unwilling or incapable of doing it as a lone individual. That's the acid test for me.

Since my work to date has allowed much variety and constant change, there is a risk that I will be drawn into specific areas of concern and lose the ability to balance the highs and lows and levels of intensity in my days. Must be careful. There has to be time to watch the kites, children at play, moving water and changing skies, art and artists, hear music and work with those young people who are on their way into public service. Without those balances, my life may start to be lived defensively and without intentionality. I've seldom had that problem, but then there has always been a central focus. That's what I must find now. If not through another position, then through a carefully-planned program of volunteering. I'll need to be ever alert to opening doors.

Tomorrow will meet with the people at the Chamber of Commerce about the Arts & Entertainment District, and then follow up on resumes sent out by email. These were sent by invitation, so I'm hopeful.

Entering a precarious period, but with lots of hope and some excitement.

Photo: Me, grandson Rhico, Ms. Winnie Mandela, and granddaughter, Kokee Amanda Reid.
Right photo: Ms. Mandela and I visited the Laura Hunter Learning Center in North Richmond on the day that we visited Death Row inmate, Stanley "Tookie" Williams. She'd flown from South Africa to lend support to the anti-death penalty movement and, specifically, to help to plead the case of this five times this Nobel Peace Prize nominee. He was also nominated for the prize in literature. This month (10/2005) his last appeal was turned down by the Supreme Court. His execution will now be scheduled unless the governor acts in his behalf.
Posted by Betty Reid Soskin at 7:10 PM

Met with Barbara Becnel and Assemblyman Tom Hayden yesterday, I like him,  and, of course, Barbara and I have forged a lasting friendship over the past years ... .

Working with him will be wonderful. He's dedicated to the idea of a moratorium on the death penalty and is committed to changing the criminal justice system in any way he can. Is anyone aware that the cost of educating a child in this state is about $6000/year while the cost of maintaining one prisoner is $27,000/year? That has to stop anyone with common sense in their tracks, right? How have we come to this?

Watched the PBS documentary on the state of the schools (hope you can catch it) called "First to Worst." Shocking story of the continuing effects of Prop. 13 on the education of our young. Helms Middle School is in my district. It's a school that I'm familiar with and what is seen on the small screen is both accurate and disgraceful. The Orinda high school shown is also in the 14th Assembly District, with its unbelievably rich educational culture and hardworking parents who have the financial ability to make up for the deficits that rob innercity kids of so much. Had to keep reminding myself that I'm no longer working for the District ... .

But this morning I'm off to a meeting of the Ma'at Youth Academy, as a board member -- an assignment I'll continue to serve -- I'm still in touch with a group that brings environmental education into the schools. This afternoon I'll meet with someone who may be interested in contributing to the revival of the Barbara Alexander Academy.

Haven't yet sent out those resumes, but have been asked by several interested people to submit ASAP so there may be interest in a continuance of my "career," despite the break in employment. Lots of possibilities ... but now I must leave for Ma'at board meeting.

It's raining and gray and the house is still. I'm so rarely here at this hour. It's strange... .
Posted by Betty Reid Soskin at 9:12 AM