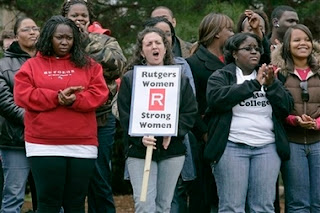 Wish I knew what to say about Don Imus ...

Found myself watching the Rutgers women's basketball team in a press conference yesterday -- feeling both admiring and sad. They're such a fine group of young women, so undeserving of the firestorm they're unwittingly caught up in ... and so open to whatever process is being set in place for their responses. And -- whatever their response -- it will have little impact on the debate, I think.

It made me feel old in ways that I'm still not accustomed to. Old as in irrelevant to the times. Old as in, "what on earth makes those young women in today's music videos display themselves so salaciously?" And, "...do the beautiful young women in the ballroom dance competitions wear those soft-porn skin-bearing costumes really mean to be so sexually provocative?" And, " why on earth have we reached the point where nearly everything in the culture has a rule book and bare-fisted competitiveness as a central theme?" Why has, "...sorry, go pack your things and head for home. You're out!" become the universal bottom line in reality television? And what is reality television, anyway, and has it any other purpose but to degrade arts and culture by being so cheap to produce? Since when did we opt for entertainment based upon public airings of domestic court proceedings, invasive explicit psythotherapy sessions, media exposure to murderers, tours behind prison walls, cheaters and pedophiles, domestic abuse, breast enhancement surgeries, drug arrests, and car chases? And we won't even talk about the Anna Nicole Smith life/death/funeral/determination-of-paternity extravaganza! Where did we believe all of this would take us? Is anyone else as uncomfortable when flipping by one of those "funniest television moments" when the studio audiences howl with laughter as someone trips over something and falls heavily to the ground -- off a roof -- into the sea, or, gets smacked with a 2X4, or experiences a hundred other possibly painful accidents? How about those no-holds-barred wrestling-boxing-mauling matches where presumably grown men kick, punch, jab, and do everything but bite their opponents?

What's happened to us? Have we lost our capacity for empathy?

I think, sometimes, that the Don Imuses and Bill O'Reilly's et al are simply mirroring back the disintegration that now dominates the cultural life of the country. What happened with comic Michael Richards, with Imus, with Trent Lott or any of the other offenders, may be an extension of the anti-intellectualism and cynicism that have run riot over the culture, and is now the norm. To hear Imus petulantly plead his status as victim of the Hip Hop generation and the unfairness that allows rappers to use racist sexist language while robbing him of his right to free expression was almost hilarious! Outrageous! Worthy of a cartoon cel in the New Yorker! Then, in the aftermath, to hear serious radio and television personalities asking quite earnestly whether or not there was a double standard operating here, as in "... why can blacks say such things but white folks can't?" As if free expression was ever meant to support and encourage racism or sexism or homophobia even while allowing dissonant voices the right to be heard? There is a huge but important difference here, and one that guarantees the sustainability of "democracy" and insures protection against the tyranny of an all-powerful majority -- the genius of our system of governance.

Maybe there's something here that resembles the Act of Civil Disobedience. Whereas: One has the right to say or do whatever ones wishes to, but only with the understanding that there may be a cost and be willing to pay it to make a point. The cost of Trent Lott, Mel Gibson, Michael Richards, Isiah Washington, and Don Imus's freedom of expression may well be the loss of their positions and public condemnation. The choice was theirs, and skipping off to Rehab and/or offering a weak apology with the demand that it be accepted doesn't cut it. The public's right to extract retribution is justified and might help to change the course of this downward spiral into a deeper alienation between races, genders, and class.

Have we lost our collective minds???

I agree with Al Sharpton. The public airways -- which we pay for with our taxes should not be allowed to be continually contaminated by corporate-sponsored denigrating attacks as those expressed by this self-proclaimed and highly-paid "comic/shockjock/wouldbeserious pundit". Mr. Imus et al can have all the freedom of expression they'd like -- but not on the publicly-owned airways. He should be fired. The producer who aided and abetted should accompany him into obscurity. Then we need to continue to clean up those images in the media that feed the monster and provide cover for the offenders.

Okay. Now that's said, and I'll gladly relinquish my not-too-old status for something more fitting, like, "...shape up and behave yourselves like responsible grownups, people!"

...and I secretly see this form of de-sensitizing of our nation as a major contributor to a climate that makes permissible a new definition of torture and a willingness to overlook the most aggregious behaviors under the auspices of "defending our country," even while occupying another. It's all in the conditioning for a New World Order. Paranoia? I no longer think so. Is this the result of the consolidation of the media under a few powerful corporate owners?

Thought about that while listening to a radio interview on NPR this past weekend with Dr. Phil Zimbardo. He was talking about his landmark Stanford University experiment. It was there to see 20 years ago. His new book is called "The Lucifer Effect." Look it up online.

It's hell to live so long that the continuum starts to reveal itself -- the connections that are invisible in the early years -- when Christmas came once a year instead of every six weeks -- and life's patterns emerge as if etched into one's brain in acid laced with blood -- when it's too late to effect the course of change; as if a single individual ever could.

... maybe it's time now to get out into this climate-challenged springtime and lie on the grass and watch the sky for a little while ... .

Posted by Betty Reid Soskin at 10:37 AM No comments: 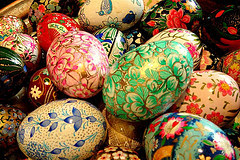 Happy Easter and, my, how things have changed ... .

Picked Dorian up this morning to drop her off at one of the group homes owned by Harmony Homes, a housing program for mentally handicapped adults who live semi-independently. She's been looking forward to today's big event all week. An Easter Egg hunt! My sweet girl/woman loved it last year and has been talking about it all week. What's so special? Those "eggs" will each hold a $20 bill, so finding them will be exciting, indeed, and in terms that even the mentally-retarded can understand. Whatever happened to those chocolate marshmallow bunnies and jelly beans and baskets stuffed with fake grass?

What does that remind me of?

Listening yesterday to the pundits chewing over the results of the dollars raised by the presidential hopefuls that now indicate who the "real" leaders are in what may be fast approaching the status of a flag-draped charade. What ever happened to the formal exercise of the electoral process of a great nation as in caucuses and primaries? They may have become something other than what we've intended; an anachronism, with the real results determined far in advance of those determined by the ballot box -- electronic or otherwise. Determined by what is predicted to be our first "... billion dollar presidential election."

Is my cynicism growing?

But I'll still work hard for Senator Barack Obama in the days ahead while waiting for Lady Liberty to begin to recover her balance -- and pray for a restoration of her wonderful sense of humor -- of whimsey. How else can one explain the election of George W. Bush to be leader of the free world? Arnold Schwarzenegger???

Think I'll go find myself some jelly beans... . Oh, yes ... that was our Governor Ronald Reagan wasn't it? -- another inexplicable folly to this aging Californian who remembers marching along Telegraph Avenue in the People's Park protests years ago -- watching smiling young women placing flowers down gun barrels of the National Guard troopers while his tear-gas-spewing heliocopters stalked and bombed from overhead. And how we watched in disbelief a few years later when the nation chose him to lead the world as our president!

Again, Happy Easter to you, and may the God in whom you believe continue to protect us from ourselves.

Posted by Betty Reid Soskin at 12:27 PM No comments: