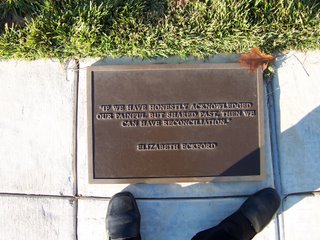 If only I could shut off my telephone and allow the answering machine to screen my calls ...

but that's a luxury that I can ill afford -- given the fact that Dorian is out there living on her own in the community and one never knows ... .

So it's two-and-a-half-rings then the short pause that tells you that you're receiving a recorded message. "Hello, this is Senator Hillary Clinton," or, "Hello, this is Bill Clinton", or, "Al Gore here," ad infinitum. And I hang up unceremoniously in the middle of their message. And so it goes, hour after hour. It's diabolical! I'm becoming rude to the live local voices that are calling in support of various ballot initiatives or candidates for school boards or council seats and it troubles me. I know these are often young people doing their all for change and all I'm being asked to lend is my patience. So now I must add guilt to my confusion and frustration.

I've sent every penny that I can possibly afford -- mostly online to MoveOn.Org and People For the American Way and the ACLU and individual candidates across the country who are being supported by the national Democratic Party led by Howard Dean. I fully approve of the way he is restructuring the party. My pockets are hanging inside out now, and I'm beginning to feel helpless against the tide that I'm praying will bring a Democratic tsunami on Tuesday. But I'm all used up, guys. No more calls, please. I've never given so much to so many, not over all the years. I'm guessing that this is true for others who can ill afford it but who sense the dangers of doing or giving any less. We cannot afford to take chances with the future of the nation. The lives of the world may be at stake. Hyperbole? No. I don't think so, as wildly crazy as that may seem.

Everyone I know is involved in this election. The stakes have never been higher. It's difficult to think past next Tuesday ... .

But I'm off to a celebration this afternoon for Richmond's African American pioneers -- a birthday party for Mrs. Ermastine Martin, a fascinating woman I've come to know only through her oral history. She was one of the 75 interviews conducted by the Bancroft Library of the University of California, Berkeley.

Photo: Plaque at the foot of the Monument to the Little Rock Nine. It's a quote by Elizabeth Eckford, one of the students who dared. (Click to enlarge.) There is a quote from each of the students.

Posted by Betty Reid Soskin at 11:20 AM No comments: 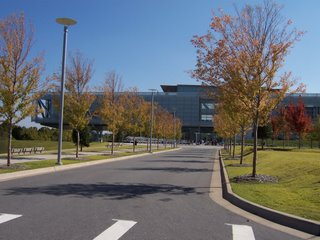 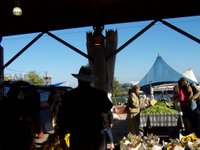 My very first visit to a presidential library ...

I really should have scanned one of the great photographs we picked up at the gift shop. They show this amazing cantilevered building that appears to hang over the Arkansas river as if suspended in air at one end. It is an architectural wonder. But my scanner is acting up and I'm not savvy enough to deal with it. The top floor is the apartment where the Clinton's are housed when they occasionally return to Little Rock, and where (according to our guide) actors Ted Danson and Arkansan and Clinton close friend, Mary Steenburgen, his wife -- were guests only the week before our visit.

But I've not yet mentioned our National Women's History Project workshop. It was held in the Fine Arts Building of the University of Arkansas, a beautiful campus composed largely of red brick ivy-covered buildings in a forest setting. Trees are everywhere in Little Rock, and one is instantly aware of mature landscaping -- so unlike much of San Francisco Bay Area (too-fast-growing) where -- except for our spectacular ancient forests -- urban trees are still young and often threatened by fast-changing physical environments. I saw far fewer of the "lumpy" industrial parks that are so common in the Bay Area, and far more neighborhoods where huge tree canopies met in the center of the streets, providing cover against the summer heat, of course. The spaciousness of lots, the old southern home designs with sweeping front porches and expanses of lawns gave one the sense of safety and peace. And -- oddly enough -- there is an almost total absence of fences. (Why do I hear in my mind's ear my grandmother saying, "... call your daddy to supper, he's out there on the gallery." Would that be the word in New Orleans?)

Grassy lawns flowed each into the next without interruption. I have a pet theory that we lost something invaluable when the tract designers began to eliminate those verandas and front porches. Losing them turned community life inward and no longer placed families out there facing one another on hot and humid southern evenings. There was little need for community policing when every home on the block had a grandmother or grandfather swaying on a hammock or chatting over a glass of lemonade on every front porch. With entire families gathered around a table radio or board games in full view of their friends and neighbors, interdependence was assumed and embraced.

I thought about that again since arriving home and noticing again the construction styles we've come to see as "friendly". No young woman could ever hide a black eye or bandaged arm for long, nor could children get more than a few houses toward home in tears without someone interceding. We elders still remember those days, and click our tongues against our dentures as we watch today's developers building what the trades call "defensible spaces," (what a concept!) while they omit the most vital parts that support collective life - the forward-looking, community-friendly front porch.

But that's not telling you about our workshop where Lucy and I presented to a group of women from many parts of the country -- our material on our park and its brief history and the events that created it. We showed our short videotapes; made a few comments then took questions from the floor. We hadn't really prepared much since we were both filled with facts and feelings held so near the surface from the sheer force of the excitement we live in every day that we're spending learning about and sifting through -- with a community -- what is now one of the nation's newest urban national parks.

I think that our enthusiasm for our subject must have captured our audience since the questions were relevant and it felt as if we'd only started when 90 minutes ended with our audience taking time to linger a bit before leaving. We met some interesting women that I'd love to have had more contact with -- but we had only two days (and a few hours) and our visit to Little Rock Central High and the visit to the picturesque riverfront open markets and the Clinton Library plus the Central High 9 student memorial were still ahead of us. Besides, we'd arrived at night on Thursday -- checked into our rooms at the Hilton -- spent all of Friday at the university -- and seen little of the state capitol until Saturday. We would leave for home on the 4:30 flight.

It just means that we'll have to find some reason to return, right?

Now ... if I can just find some legimate reason to visit Atlanta ... another dream yet to be realized before dementia sets in.

Photo: Remember to click on this thumbnail for the enlargement.

Posted by Betty Reid Soskin at 10:05 AM No comments: