Landing at the Atlanta airport is an adventure of great significance -- and had it not been for the fact that I was escorted by Sue Fritzke, deputy superintendent of our 4 parks --  I may have had to spend the rest of my life riding up and down on the most amazing set of escalators on Planet Earth!  Wiser heads had prevailed, and the decision to not allow me to descend on Atlanta alone was fortunately made by caring staff.

We arrived early Sunday evening and spent the first of several sleepless nights of anticipation of the most spectacular set of experiences one might ever expect to live through.  It was an emotional roller-coaster that threatened to overwhelm me at almost every turn.   I was on the verge of tears much of the time, and before full recovery could take place -- another heart-stopping moment would occur! 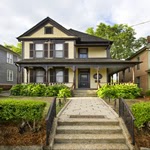 I'm not sure that anything could have prepared me for the 3 days of unimaginable heart-rending vignettes that I will be re-living for a very long time.

Ranger Judy Forte, Superintendent of the NPS King site was a gracious host who set everything aside to provide personal guidance to a far larger King campus than I'd ever imagined existed.  She was joined by Ranger Tim.  There was the National Park Service site (shown above); the Martin Luther King, Jr. family site that adjoins it; the Birth Home -- with more than hints of the gracious lifestyle of the elder King family.  The  lovely home has been faithfully restored and lovingly preserved.  We visited the fire station with its fire engine of the times; the original Ebenezer Baptist Church where the elder Pastor Martin Luther King, Sr., had held forth, but that now rings with the familiar recorded voice of his illustrious son; the tragic hero of our times. 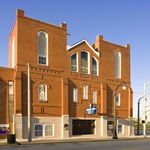 The rangers who escorted us were unstintingly generous with their time and well-versed in the stories, large and small.

The King campus is so much grander and the stories so much more comprehensive than I'd had any reason to expect.  There were undiscovered aspects to stories that I thought I'd known before.   The previously mythical has now become real.  I've now stood in the places where those lives were lived; and things will never be quite the same.

I am so proud and grateful to be associated with the National Park Service in these years when Civil Rights history is being given its due after being marginalized for decades.  But I'm re-thinking my recently-proclaimed statements to the effect that "history should not be ghetto-ized, but that black history needs to be blended into American history."  Such a statement may be more glib than reliable.  Not so sure about this any more, but more about that later.

Got to meet the only person I could claim to know in Atlanta (one I'd only met online).  Lisa took time from her job (only 5 blocks away from the King Center) to meet me.  We'd connected some years ago when engaged in a genealogy adventure.  Again, that feeling of the magic of technology that brought the virtual together with the actual -- and I could feel the friendship of long-standing in the embrace -- feelings that transcend the "real" and moves it onto another plane of existence -- one that I may not live long enough to ever fully understand.
Posted by Betty Reid Soskin at 3:06 PM No comments: