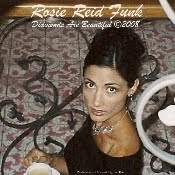 It was Rosie announcing in an email that her new venture (she designs elegant jewelry and is venturing into songwriting and singing a la grandmother and father, Bob), and,  being entrepreneurial as is her legacy -- has set herself up in the marketplace online.  Not only that, but with Grandma's  permission has generously included 6 single Betty Songs (from over 40 years ago) for sale along with hers.

Would it not be ironic if one of those songs caught on (despite the fact that I'm an octogenarian with very few years to go before I've left the "octo" and entered the "whatever is left" part of my life, and found myself selling DVD's alongside Taylor Swift, Lady GaGa, and Justin Bieber?  Would that not be wild?   Talk about eclectic!

Anyway, I immediately clicked myself onto her website (it's really colorful and lovely); enlarged her bee-yoo-ti-ful jewelry pieces with my mouse (featuring crystals and magnets in truly original designs); ordered a necklace for Alyana (a younger granddaughter who just graduated herself into high school in the fall; and then went to the music feature therefore becoming Rosie's virgin sale.  Saw the photo of myself beside one of Rosie and marveled, again, at having lived into such a time ... .

Visit Rosie Reid Funk and CreoleRox Jewelry (http://www.rosiereidfunk.com) and roam around, and tell her that Grandma sent you.

Top Photo by Bob Reid
Posted by Betty Reid Soskin at 11:40 AM No comments: 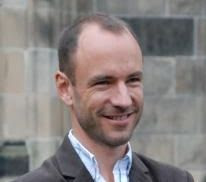 His name is Dr. Trevor Stack, and, as a referral from Museum Director, Andrea Blachman of the Martinez History Museum, I was to meet him at the Rosie the Riveter Memorial on Thursday afternoon ... .


The only thing I'd learned from our brief phone conversation was that he was giving lectures on citizenship.  And just where do you suppose I fit into that topic?  I wasn't sure; and that his return to Europe is only a few days away (on Sunday, I believe) and this would be a first and last conversation, so there would be no time for re-thinking positions, or self-editing.

During his visit to Martinez on his speaking tour, he'd been given a copy of the cover article I'd written for the California Historian in the June, 2009 edition (online), and wanted to meet and speak with me.  Could it be that he had assumed me to be a credentialed legitimate "historian"?  Would he be disappointed upon discovering that this was not true?  Would I feel like a fraud passing myself off as a scholar?  The answer is "no," on all counts, and that this unassuming professor simply wanted to discuss the ideas I'd presented, and that his extensive travels and times spent in Mexico made him sensitive to racial issues and those of citizenship in relation to people of color, particularly relationships between Latinos and African Americans.  A legitimate interest, and my article had spoken to that, though not substantively.

Yet, just before our hour-long conversation while basking in the warm sun in Marina Bay Park ended -- I felt my toes curl up in my sensible brown government regulation oxfords as he told me that he will be using my lengthy article with his students at Aberdeen University upon his return to Scotland.

Can you ever imagine in your wildest dreams ... ?
Posted by Betty Reid Soskin at 10:46 AM No comments: