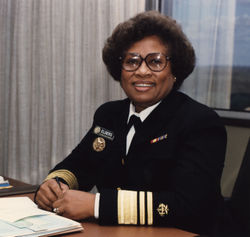 and I'm no longer feeling at a loss to understand why it happens the way it does. Much of the success can be credited to really good planning, but there's one piece that I'm not certain how to replicate. At some point I'm going to run out of "150 of Betty's closest personal friends." Almost everyone on these tours have been people with whom I've had some relatively close connection at some time in the past, either through my work or through my years as a faculty wife at the university; from across the counter in Reid's Records in South Berkeley; from the almost 20 child-rearing years in suburbia; or through political connections over many years and in many places. I suppose it would be possible for a younger less socially active careerist to duplicate this feat, but it won't be easy. I've now lived so long that there are times when I feel as if I've now met everyone within a 50 mile radius. The entire population of my state is beginning to look vaguely familiar, and I'm only half-joking.

While feeling particularly successful this morning (yesterday was my 85th birthday), and extravagantly rewarded for the past several weeks of planning, I'm nonetheless already concerned about the question of legacy. It's surely possible for the work to continue without me. It must. I worry, though, that I've not been able to adequately articulate just how one would go about recreating the formula that's proven so exciting.

I surely won't live to see it, but I can and do envision the path that this national park will take in its future development. I worry that those around me -- from a community so scarred by its poor image -- won't think large enough -- and will lose this chance to take its place on the world stage as a major player as a destination.

I think that one can make a good argument that it may not have been Betty Freidan and her groundbreaking book, The Feminine Mystique, that emancipated women from the shackles of patriarchy, but Henry J. Kaiser and the homefront World War II demands of 1941 that set in motion the irresistable force that released us into a new future in partnership with our husbands and fathers for the first time in recorded history. A strong argument can be made that the Civil Rights Movement wasn't born in Freedom Summer of 1964, but on July 17, 1944 when the tragic explosion at Port Chicago that lost 320 navy men, 202 of who were African American and the resulting refusal to load those floating arsenals and the subsequent mutiny trials that served as the catalyst to change. The important role the Bay Area and this city played also might provide some reflected glory if it were recognized that it may well have been from the modest 20-room (blacks only) International Hotel on South Street just off Carlson Boulevard that the eloquent C.L. Dellums along with A. Phillip Randolph and their unionizing of the Sleeping Car Porters reached the White House and shook Washington -- and created waves still felt in labor circles. Or that in the next generation after the great war, the children of those displaced and abandoned wartime workers gave birth to the Black Panthers, the more militant change agent that reshaped the way black youth saw themselves and the world; a movement that swept across the nation from the shanty-town of North Richmond -- and gave birth to a new national black pride. And that -- from those same years a little girl, the daughter of homefront workers from Arkansas, attended local schools in North Richmond, and years later rose to become the Surgeon General of the United States under President William Clinton -- sassy, irreverent, brilliant, Dr. Joycelyn Elders.

On the guided tour yesterday I found myself wondering just how that complex set of multiple stories can ever be captured and shared in any meaningful way without trivializing them? How is it possible to communicate just how powerful are the forces that were brought together here in this modest working-class town? How on earth can we get folks to see the importance of exposing the wounds suffered mid-20th Century as an essential element in the healing process? And, how can anyone ever be convinced that the answer is not to be found in denial of our differences, but in strengthening those places where each of our cultures is unique so that we add to the whole and don't find ourselves continually defined through racial and cultural integration as a kind of generic-never-quite-the-real-thing Americans?

Perhaps one day we'll see an entire fleet of brightly-painted small buses carrying tourists through a series of culturally-specific tours -- each dedicated to the telling of a part of our complex and exciting national story. The Japanese, African American, Italian, German, Women, etc., stories can be told through visiting the many sites that hold those memories still. The industrial triumphs of Henry J. Kaiser are well known and surely must continue to be explored as the backdrop to all that followed -- but as the story of the winning of the war. The story of the ensuing two decades of social upheavel and continuing progress set in motion by World War II -- may be equally important to the story of the winning of the peace, something that continues to be illusive in the world. The secret that led to Richmond's ultimate survival and celebrated diversity may be hidden somewhere in this city. It may not yet be well-understood, but I believe that most of the community is aware that -- over the decades -- we've begun to re-write the rule book, and that our strengths lie in cultural and racial diversity and mutual respect, and that integration is now defined in new ways not dependent upon the giving up of our differences - but the sharing and celebrating of those variations with pride and dignity.

Posted by Betty Reid Soskin at 11:01 AM No comments: