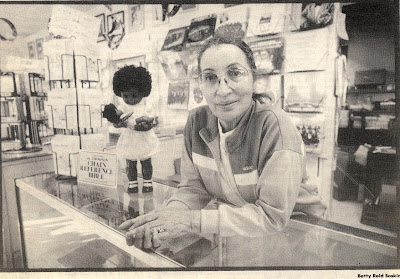 I've been hesitant to include a link for ordering my book ...

... from my blog.  It's sometimes difficult to discern when I'm being a park ranger, and when my identity is that of Betty, Private Citizen.  In the first case it feels less than comfortable to do so because I'm a federal employee in my other life where it's not permissible.  When I'm at home and out of uniform, that Betty seems other worldly, and not quite real.  Here, surrounded by family photographs, artifacts, and memories, I'm still living the life described in Sign my name to freedom, and -- from this place -- those rules don't apply.

It is here that -- when I remind myself of those Reids Records days -- that little record and book store that Mel and I established in June of 1945, where our eldest child, Rick, learned to spin records at the turntable, but had to stand on an orange crate to do it, where I ran the shop while Mel worked at San Pablo Park then to the Kaiser shipyards for duties on the swing shift.  Where we promised ourselves that, as soon as the war was over we would never work for white folks again.   Where we stocked our albums and 45s in orange crates, made change in the wooden cigar box.  Where we cut out a window in the wall of the garage of our little duplex on Sacramento Street in Berkeley through which we sold the latest blues and jazz to the recently-arrived black migrant workers looking for culture they'd left behind in the southern states from whence they'd come seeking work in the defense plants -- sometimes successfully -- sometimes not.

Then in the exciting year of 1964 we were successful enough to acquire the lot next door to our little duplex and erect a two-story building to house our enterprise, a true sign of success -- well, almost... .

We'd both been introduced to formal bigotry and segregation that arrived in the Bay Area in 1942, our Bay Area where we'd both grown up as second generation Californians.  Though, of course, those practices had existed as gentlemen's agreements and inserted in property deeds that limited our access to many advantages enjoyed by others.  But all that was encoded, informal, unstated ... .

We were relatively successful in business, though we crashed and burned some years later and nearly lost everything when we simply lacked the business savvy -- without enough generations in the marketplace, or the sense to know that we didn't know.

It was only a matter of years before the discount houses caught on that there was a neglected market for black music, and we were shoved unceremoniously out of the field because we simply could not compete.  But we proved too stubborn to close shop, and we still are. 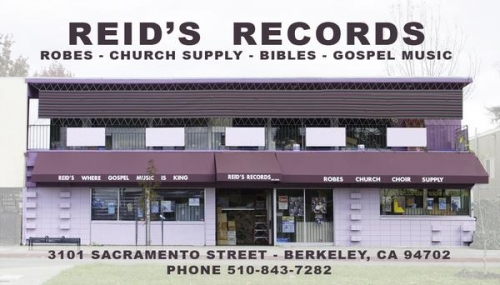 It was during that period that -- white musicians were discovering that, by expropriating the talent and skills of black entertainers, they could make millions, while black artists were being required to use the back door at the places that hired them, while they were not allowed access to the clubs they worked in except when they were "on"!  The Britishers were robbing black musicians blind and sending the music back across the Atlantic to huge and enthusiastic audiences throughout our country.  This, while the white record shops were doing the same in the industry, and Reid's simply could nor purchase with enough volume to begin to hold our own as retailers.  Banks would not provide Lines of Credit to black entrepreneurs, a practice widely used by whites in the industry to get over the rough places that invariably arise in every small business.  Not unlike the time when Louis Charbonnet, my grandfather, could not get a patent on his inventions as a black man, nor could he work except under the license of a white contractor.

We still had a long way to go as a nation, did we not?

That little store is still standing.  Our patrons over all the years were 99% African American.  We gradually began to change our inventory from jazz and blues to black gospel music, church supplies, and choir and pulpit robes, since this was a developing market not yet  discovered by white retailers.  Mel began to promote gospel concerts featuring national stars, Reverend James Cleveland, Rev. C.L. Franklin and his daughter Aretha, Shirley Caesar and the Caravans, the Mighty Clouds of Joy, Soul Stirrers, etc.  Their concerts would play to up to 5,000 black churchgoers on any given Sunday.  They filled the huge Oakland Auditorium to the rafters with the most moving music imaginable this side of Heaven!

My husband, Mel, and his uncle, Paul Reid were the giants in the newly emerging industry -- an industry they were actually creating -- and they were relatively successful.  It wouldn't last, however, but long enough for us to know that we'd accomplished our goal of being independent and productive.

Now:  Mel is gone, as is Paul.  Mel died in 1987, but our youngest son, David, and his daughter, Kokee, have been operating the shop for many years, against all odds.  The industry has seen great change.  It has unalterably moved into cyberspace and the old practices have become outmoded.  Fast-changing technology has decimated old forms of trade.  Few choirs are uniformed in robes anymore, and tapes, cd's, record albums, are all things of the past.  Music is streamed online and purchased one song at a time, with few complete albums any longer being sold.  Vinyl may return at some point, but only as artifacts, antiques, souvenirs of a time long past.  David has raised his family while making a real effort to continue in his parent's footsteps, if only for the historic value and that inherited fierce family pride.  The neighborhood has gentrified.  The surrounding black community has vanished almost completely -- slowly priced out of the City of Berkeley -- moving ever deeper into the valleys and miles from the old haunts where there was a center in which black culture could survive, and maybe be built upon with our family's help; to establish new roots in the West.  The dream is contagious, and it has long since invaded David's DNA!

Now:  Never imagining such a thing would be possible, at 96 I've entered the final phase of a long life by becoming an author of a first book, "Sign my name to freedom," a memoir, that will be launched on February 6, 2018 by my publisher, Hay House of New York.  That places me in direct competition with the behemoth of the industry, Jeff Bezos of Amazon!  History repeats and somewhat ironically.  This is the old and dreaded discount house of the present -- the kind that dominated the gradual demise of a small business started by two daring young people of color at a time when such a thing was unthinkable but still possible, and a local black community that faithfully supported them in their effort at trail-blazing.

It would be absolutely happily-ever-after if that little memoir somehow provided the stimulus to keep Reids Records in business until we're ready to give it up after 70 years.

This is only to say that you can put in an advance order for my book online, but it would be really great if you did so through this link 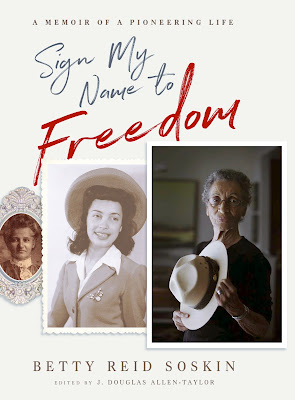 The Reid Family would be most grateful, and I don't think Amazon would miss much by your doing so.


Posted by Betty Reid Soskin at 2:47 PM No comments: