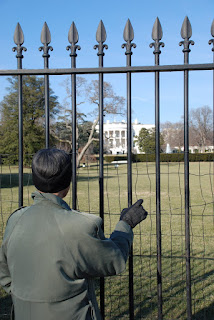 That's where you come in. It was sitting here at my keyboard that the real debriefing began; culling through the photographs and re-living the moments. I'm not sure what I'd have done had I not been able to share the experience where no one can see the tears or sense my vulnerability ... .
Posted by Betty Reid Soskin at 11:38 AM No comments: