In the Sondheim lyric as sung by the inimitable Broadway Diva, Elaine Stritch, "I'm still here" ... . 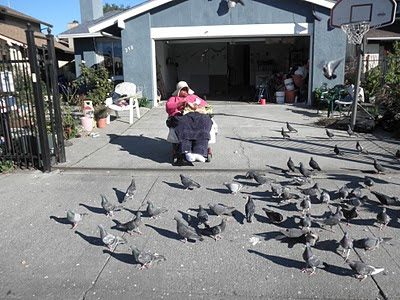 So is my friend, Lily Mae Jones, though she was truly looking forlorn last week when last I dropped by to inquire.  She was sitting in her wheelchair at the front of her driveway -- tossing the daily spread to the pigeons who visit for the toss-out that sustains her sense of self-worth.   She makes a daily trip in her motorized wheelchair to the Rescue Mission some blocks away for stale bread with which to fulfill avian expectations. Her beloved aging dog is lying hopelessly ill on the garage floor just behind her -- Lily can't possibly afford the vet's bill to relieve him in what are surely his last days.  She was obviously heartbroken but stoic; and I was of little help.  This could mean quite literally thousands of dollars -- the fate of so many of those whose heart capacity includes much-loved companion pets but whose income doesn't allow for much beyond that.  One of the unheeded tragedies of life in the Iron Triangle and communities like it.

On our last visit to Dorian's vet for a look at a growing bald spot on her cat's hip (to the cost of $85 for examination and prescription), she was admonished for not maintaining her pet's dental care, "there's tartar building up which will cause problems in a short time."  Dorrie's face clouded over with guilt - because her mental retardation did not allow her to filter out what is truly needed from whatever else this might be.  Dorian, like Lily Mae, lives on Social Security that surely doesn't allow for such costs -- but I can't imagine what life would be for Dorian to live alone and independently without the companionship of her pets. 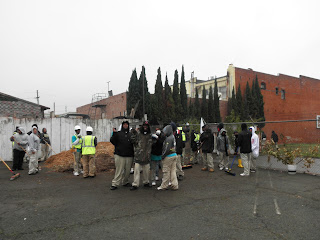 While just across the street, the work of the young people has been stalled despite the delivery of a truckload of mulch from the city's Department of Public Works.  Due to a lack of response to the call for lumber with which to construct the raised beds for plantings; and because of soil contamination left over from industrial practices that date back to the time of the World War II, seeds planted directly into the soil yield food not fit for human consumption, sadly.  There has been excited announcements of  much grant funding awarded in this city for such projects (as announced in recent press releases), so it may be simply that we need to attempt to get some of that directed into CYCLE's gardening project.  So often problems arise from the simple fact that one is not in on the politics that are operative -- even as it applies to what's going on in the Congress at this very moment. 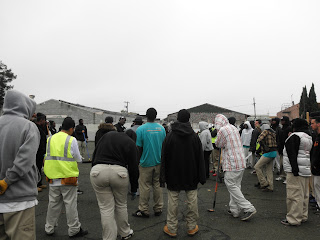 Still working on solutions and finding little more than fitfully listening ears and not much else, actually.

Ironically, much of the time I find myself as well as agencies I've worked with over the years providing answers to questions that no one is asking.   But I think this is simply a case of finding the connecting links that may need some nudging. And, yes, I'm aware that this is probably way beyond my job description and the ranger's "civic engagement" box on my reporting forms.  But it's where the work takes me.

In the park service there's something called "wayfinding," an attractive word, right?  Can't see where there's any application here, or at least that I can see at this point, but maybe by stretching here and there something will give ... .

These 85(!) young people  turned up on Friday despite the rain, only to find the resources needed to complete the work had not turned up -- at least not yet.  This was the third weekend, and I'm not sure how long we can expect the momentum to last before they give up on this particular dream.

Posted by Betty Reid Soskin at 1:03 PM No comments: