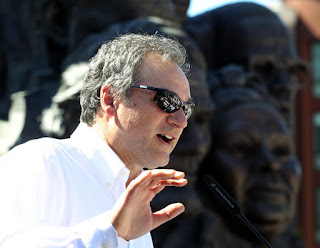 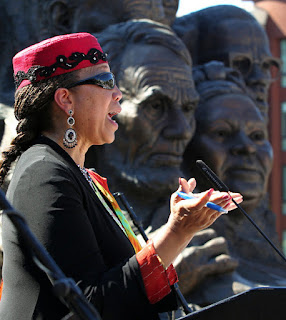 Posted by Betty Reid Soskin at 3:02 PM No comments:

Exciting weekend of firsts ... and, yes, I'm still having "firsts" even into my tenth decade... . 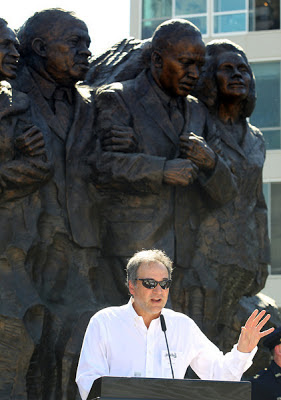 On Friday there was the installation of the third and final section of the noted sculptor, Mario Chiodo's, Remember Them, Champions of Humanity" in the Henry J. Kaiser Memorial Park in downtown Oakland.  Two years ago we attended the setting in place of the first two of the three giant bronze statues --  with the third 40' high stunning piece unveiled on this day.  (For a history of this exciting arts triumph type Mario's name in the search bar on left side of screen above the banner to pull up earlier posts.)

Can't talk about it quite yet, but -- if only we can convince Richmond of this city's growing importance as a national park comparable to any other -- such as Yellowstone, Yosemite, the Grand Canyon, the GGNRA, etc., with a future resembling Golden Gate Park in San Francisco or New York's Central Park (yes, that big!) over the next few years of park development ... if only ... . 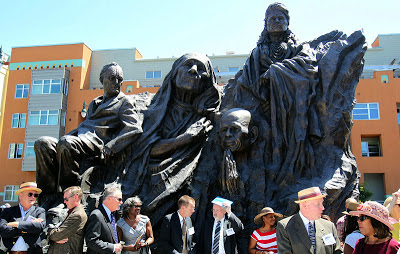 
... and if there are, I intend to find them over the next few months and ignite a fire of inspiration enough to light up the sky over our magnificent 32 miles of shoreline!


Well maybe not all by myself, but with the help of other staff and some amazing friends plus a national agency providing enough wind at our backs to allow the continuing making of history.

Posted by Betty Reid Soskin at 5:19 PM No comments: