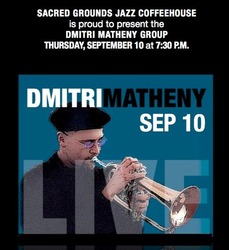 After reading the email sent by a kindly stranger on Tuesday, I realized that here was someone -- the age of one of my sons -- with whom I could start a conversation somewhere in the middle of the sixth paragraph!  We both speak "jazz!"  There has not been a lot of that in my life over the past several years.  I've had music experiences, though, in many forms, all wonderful.  I've stretched and grown to meet the new (to me) more disciplined art form of chamber music, and have felt enriched by it, though never feeling quite "at home" with the genre -- in its equally disciplined audiences I remain somewhat self-consciously involved.  I'm always aware of my fashionably-confined toes struggling to express themselves invisibly to the insistent rhythms put down by the low notes of the bass or cello -- but failing miserably.  Music for me is a participatory art form, a gift left over from my instinctive intuitive African American "call and response" roots.  It's in the DNA!

Somehow I'd missed "serious" music despite the attempts made by Ms. Reiniger, my fifth grade teacher at Highland Elementary.  It was she who introduced me to the classics, but my own cultural background soon crowded that out in favor of input from the likes of Duke Ellington, Lester Young, Billie Holiday, and the jazz masters of that day. Yet, to this day the first strains of Sibelius's Finlandia brings feelings of elation that take me back to that modest classroom in the East Oakland Flatlands and the scratchy primitive recordings she brought to share a passionate love of symphonic music with her students.  It's always Ms. Reiniger who is (in spirit form, of course) sitting approvingly behind my left shoulder at chamber music concerts; and I truly welcome her re-entry into my life on such occasions.  But jazz is home!

The name at the bottom of this wonderful letter sounded vaguely familiar -- enough to cause me to Google it, then to spend a delicious hour or two browsing his website and discovering signs of myself there; even my Edna St. Vincent Millay's "Renascence", which reminded me of sitting on a piano bench in the basement-turned-studio of the North Oakland home beside a young friend, (later) renown tenor saxman, the late Jerome Richardson, as he introduced me to Edward MacDowell's "To a Wild Rose." It was exquisite in its simplicity.  We sat in silence as the last notes faded away.  I was about sixteen; Jerome perhaps 3 years older,  I think we both  recognized that day that beauty could not be confined to genre -- that labels could not limit its power and that it would turn up in unexpected places for the rest of our lives in music in all of its forms.  (And how long has it been since that image has come up for me?)

Dmitri mentioned that we shared a world view and that he has moved to the Southwest from the Bay Area, and "We'd met at a jazz concert in the East Bay," his email read, "...and when I get homesick for the Bay Area I read your blog."

I typed his name into the little search bar -- (above the banner at the top of the left side of the screen), and guess what?  I'd written an entry on June 12, 2005 about that very jazz concert where I'd heard him play that one time. I didn't recall the name of the pianist who'd appeared with him, but there it was, "Dmitri Matheny." He plays flugelhorn, and as I read my description of the experience I was transported back to that evening as if it were yesterday. The concert was one produced by the Gold Coast Chamber Music Players; before an audience of suburbanites in Rossmoor,  a retirement community in the Diablo Valley.  Who ever would have expected that?  By what powers did I mark that evening 5 years ago for remembering -- a wisp of an idea that one day I'd be brought back from a blue funk by a kindred spirit?  Hardly.

Yet, this Berkley School of Music-trained brilliant jazz musician gave me a most beautiful tribute; it affirmed me as an artist -- something I rarely self-identify with or feel worthy of claiming title to --

Dmitri said,  "I don't have your gift for the written word, but here's the thing: I want to play music the way you write."  How unbelievably lovely is that?

What a powerful antidote for depression.  I may never feel blue again -- at least not until the next time.

Which reminds me to plan to take in at least some of the San Francisco Jazz Festival this year.  Maybe I'll hear Mr. Matheny again, and if not, to at least allow myself to be open to the creativity and aliveness that jazz represents to me -- still.  I was reminded of that vibrancy as I listened to the music on Dmitri's website ... and I will visit often now that I've discovered this wonderful resource that is so much a part of the essential me.
Posted by Betty Reid Soskin at 7:19 PM No comments: