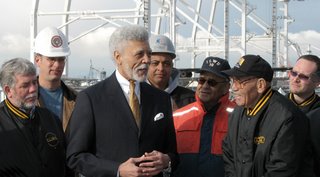 Can you imagine that a mere 26% of the electorate bothered to vote on Tuesday?

... and to think of how I agonized over my responsibility to not only vote, but to vote in a primary of such little concern to so many. I simply cannot fathom how anyone can believe that a democracy can be maintained under such conditions. Small wonder that our power to effect change has diminished so drastically. It now takes so few to control the fate of the most powerful nation on earth. Does this mean that my vote is therefore potent beyond measure? Or does it simply mean that -- without a free press and enough of a constituency to make a difference -- a handful of us are plying the Ship of State through a storm-tossed sea with only one oar?

When Dorian and I arrived at our polling place on Tuesday at 3 o'clock in the afternoon, we were the 188th and 189th voters on the register. A bad sign. This is the first year that I've not done Get Out the Vote work out of the central headquarters, so have experienced poll-watching and nose-counting on election day. I could judge about how many voters my precinct should have produced by that hour. It would be relatively fast count, though, so I found solace in the fact that it wouldn't be a late night watching the website for the Secretary of State where the statewide returns are constantly updated.

Can't imagine that Richard Pombo was overwhelmingly victorious, and that the only Republican I could have ever actually voted for, Pete McClosky, would finish so poorly. Was also surprised that former governor, Jerry Brown would have won so handily after his miserable performance as the mayor of the city of Oakland. Name recognition had worked for him while serving Pete McClosky not at all. But then McClosky has been out of the public eye for long enough to be forgotten by younger voters, and Brown has remained center stage for several decades now.

Watched Ron Dellums mesmerize his election night audience with his gift of oratory and felt warm and hopeful. As I write this the count (still going on) gives him less than 50 votes short of enough of a majority to avoid a runoff for the mayor's seat.

There were other victories and enough strong showings among the losers to give hope that Progressives will show up well against their conservative opponents in November. California must continue to point the way toward a renewal of the promise of a better nation and world. We can do so much better.

Now I can work with renewed vigor for the election of Phil Angelides in the general election.

... sure wish for a crowded polling place next time.


Posted by Betty Reid Soskin at 7:53 AM No comments: 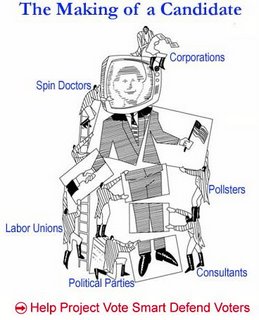 Got to the polls and voted my conscience. Were it possible I would have voted throughout the state on every ballot for every candidate whose agendas match my own. The stakes are too high now, and the country I truly believe is in a state of such chaos that it will take millions of voters committing the act of independent thinking -- and demanding drastic change to turn it around.

I want nothing less than impeachment of those in power and will settle for no less; sorry.

I refuse to accept less than total withdrawal from the wars.

I insist upon an end to capital punishment.

I yearn for an America that never quite attained the greatness promised by her Constitution and Bill of Rights. I want another try at it in my time.

I want a nation worthy of world respect; a nation that honors commitments and treaties. A nation for whom preemptive war is unthinkable and peace is more than an idle hope of dreamers.

While fully understanding the implications of casting a vote that may have less power to make those hopes real than a butterfly in a hurricane, I have nonetheless voted my aspirations instead of my dispair.

I voted for Barbara Becnel for governor today and for everyone on my ballot who has expressed my hopes for a city, state, and country I can love and respect again. I find no comfort in deferring those concerns. I'll vote for Angelides in November. Today I voted against his lack of support for the abolition of the death penalty. I thought that his support of a woman's right to choose and of same sex marriage were enough. Not so. The elimination of capital punishment outstrips all else, and demands addressing before another life is taken in our names -- due to a dysfunctional system of justice that disproportionately devours the poor and uneducated and far too often overlooks the white and the wealthy.

Tomorrow I'll begin to look around for voices that echo my own and to work as hard as I can toward those goals for the November general election. I suspect that most of those voices are registered in Progressive Democrats of America led by Rep. John Conyers and supported by Cindy Sheehan et al. I'll continue to follow the lead of MoveOn.com and to listen for cues from Amy Goodman of Pacifica Radio's Democracy Now. I'll pay closer attention to Noam Chomsky and the writings of Greg Palast.

Now for a cup of hot tea and that scone I stashed in the freezer a while back ...

I'm feeling hungry -- and resolute. (I'm grinning with no one around to see; a good sign.)

Vote, everybody! Vote your concerns even if they're in opposition to mine. That's the way the process works. So many have died to protect this precious right that we so often squander. Never has it been more important to exercise the franchise. Our lives surely depend upon each of us each adding to the whole -- and by so doing -- together we will the move the Ship of State into safer waters. I am trustful of consensus and in our ability to achieve it through public debate.

With so much at stake and the death toll rising by the hour, those clowns in Washington are bitterly locked this day in a debate over whether marriage should be limited to a man and a woman, and that all other love relationships be forbidden by the Constitution! Does anyone truly believe that this is a matter of grave concern to the electorate? Tell that to Brad and Angelina -- Brittany and whoever will be her next captive stud. C'mon! Defense of marriage? Indeed!

There's a hint in the air that this transparent farce will be noted by voters everywhere -- and that we'll turn out this Administration of Idiocy come November! We the voters are so very much better than they know.

Posted by Betty Reid Soskin at 8:35 AM No comments:

The day has come to deliver to David my "talking window" ballot for Tuesday's Primary election. For years I've carefully studied the candidates and initiatives and -- as if I had the power to persuade -- would get out my roll of newsprint and marking pen, and prepare my ballot for the front window of our store. I've always done that with a sense of pride and a heady feeling of personal independence. No commercially designed mass produced signs for us. It was always a laboriously handprinted display with our signatures (David's and mine) at the end of our slate.

I've been trying to get to that project for weeks, realizing that I needed to do that early since many folks in South Berkeley would have voted absentee weeks ago. Couldn't face it this year. Have been plagued by indecision because of my deep concern about the issue of a moratorium on the death penalty and of the three vying for the governor's post refusing to support it.

I've planned all along to vote for Barbara Becnel as a protest, at least in the Primary. I volunteered months ago to work on her campaign. We met together to chat about just what role I might play, but due to her impossible schedule and (surely) lack of experience in the political process -- getting media attention and public support -- her workers simply didn't get around to organizing that and time slipped by without our ever coming together again.

The last thing I heard before turning off my bedside radio last night was the fact that Democratic candidates Steve Westley and Phil Angelides were in a deadlock for the nomination to face Arnold Schwarzenegger in November. And -- there are more undecided voters than ever before; believed to be a huge factor is the negative campaigning both engaged in over the past few weeks.

Looking at the campaign from the inside out -- from years of working for candidates for whom I was actually employed on an everyday basis -- I knew that this is not the work of the candidates, themselves, but are the words of their highly-paid campaign strategists who create the hit pieces, fund, and then spread them throughout the media. It's an ugly business that has served to discourage voters from participating in the process at all in many cases. This year it is more pronounced than ever, and I suspect that both candidates are embarrassed by this outcome.

This morning I must prepare my window ballot. Because this vote is so terribly important -- at a national level -- (again) -- I'm going to be forced to scrap my principles and vote for the candidate I've intended to support all along in the General Election in the fall; Phil Angelides. How I would have wished it were otherwise, but in an election this close, to vote for Barbara may risk the greater prize -- strengthening the Democratic power in this state to overcome possible losses elsewhere in the nation.

Do I believe that a single vote is that important? I do. One day after his election, I will make the trip to Sacramento with other advocates and make my case on the death penalty to Governor Angelides, personally. Once the pressures of the campaign are over, I cannot believe that this man of conscience (with a wife and daughters against the death penalty) won't provide the leadership necessary to creating a moratorium. With a California electorate that polls 70% in support of the death penalty, no candidate can afford to be in opposition. I'm far too practical to expect it to be otherwise, unfortunately.

And -- I'll vote out of hope and solidarity for the common good -- and with no cynicism. Ultimately, voting is a matter of great privilege and a ritual that I find both exciting and meaningful. But I do so with deep regret and a sincere apology to the memory of Stanley Tookie Williams. I'm fairly certain that Angela Davis would never make this compromise with principle; not on your life. That knowledge does little for my comfort level. Yet, I can't imagine that she doesn't act strategically when necessary. Is this what I'm doing now, or, by using that word am I asking to be qualified for forgiveness at least in my own eyes?

Are we again in that place in history that urgently demands an uncomplicated "black or white" response? Instead, do we find ourselves paralyzed by having to deal once again with one of the countless shades of grey? Does this account for such a wide margin of Liberal/Progressives not yet declared -- undecided on the eve of the Primary? Is this, too, another of the hidden disadvantages of aging; a time of life when experience has so broadened our breadth of understanding that there are few simple answers left?

This is only the most recent skirmish in the struggle to end capital punishment in my state and the nation. The work will continue as before.