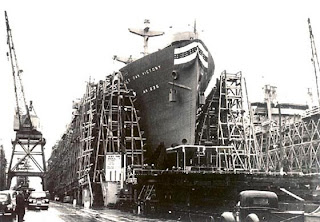 My talk for the next few events is beginning to take shape and play against my eyelids just before sleep ...

Met with students from Dominican College and their teachers on Friday, along with my colleague, Elizabeth. We toured the Rosie Memorial (always a moving experience) and toured the SS Red Oak Victory, the last ship built in the Kaiser Shipyards and now undergoing restoration at Shipyard 3 in Richmond. The Red Oak was one of the 747 ships completed and launched by (cement contractor who'd never built a ship!) Henry J. Kaiser and his rag-tag work force of thousands of former sharecropping older men and women of every race, newly emancipated white women, under-aged boys, and many of the disabled. And that remarkable feat was accomplished in just 4 years and 7 months of WWII. If you're keeping score that would be launching a ship almost every other day; a feat never equaled since that time. The record shows that one ship was successfully completed and launched in 4 days and 17 hours in a competition with other shipbuilders!

Accompanying her classes was Cynthia Taylor, Ph.D., historian and author of a newly-published book on the life of the late great A.Phillip Randolph, founder of the Brotherhood of Sleeping Car Porters. She'd visited us last week in preparation for Friday's tour and we'd had some time to chat. I've been invited to work with her this summer on her next book having to do with the early development of the modern Civil Rights Movement (during the 40's) from the West Coast as it moved across the country. Exciting possibility.

Just before sleep, I now find myself comparing the historic mobilization of the nation in response to the very real threat of world domination by the forces of Nazism and today. Far fetched? I don't think so. The more I've thought about it, the more I'm certain that the two periods are closely aligned and that comparisons are relevant to today.

It is said that it took 17 people working on the home front to support each man in battle overseas. That meant that we were all critical to the positive outcome of WWII; every man woman and child had a role to play. And we did; even that little 20 year-old clerk, Betty, in the Jim Crow union hall. Women moved into the work force in large numbers for the first time; child labor laws were suspended so that they, too, joined in where feasible; families planted and maintained victory gardens to supplement limited civilian food sources; and elders acted as air raid wardens and/or returned to the factories and canneries for the duration (Papa George among them).

WWII was our country's last declared war and the last time in our history when the nation went to war -- not just the armed forces. Korea was called a "police action" and suitable euphemisms have covered every conflict since that time.

Today we live in a time, again, when the entire world is under threat. This time that threat is climate change. And this time it will take -- not only those of us living in the developed nations, but the entire world population to stave off the gradual extermination of human life from rising seas and changing physical environments. Maybe each 1 in-the-developed-world to 17 in-emerging-economies odds will again be required in order to balance off all those good folks in faraway tropical climates waiting to own their first refrigerators and air conditioners! Whether we can globally respond in time remains a question. That we have already begun to see measurable signs of global warming is no longer in doubt.

The kind of general mobilization required to sustain life as we know it may lie in the history of World War II home front as we lived it. The lessons were difficult to absorb since the speed with which we were forced to respond in order to survive the Nazi onslaught left little time or energy to incorporate them. It might be wise now to revisit that heroic period and take from it the models that served to reverse that crisis and make the world relatively safe again.

Maybe. Just maybe. If we allow that those of us in the western world consume the lion's share of the earth's resources; that it is we who have contributed most heavily to global warming; and that if we can contain and conserve on that which we have created - with or without the rest of the underdeveloped countries -- we might buy the necessary time to develop corrective technologies to move us from this disastrous path we've embarked upon.

In the history of the home front effort of WWII there may be evidence that this is possible. Our generation answered the call to protect and conserve in ways that turned back the threat of murderous world domination. The only question is whether today's generation with its greatly improved technological capacity can be mobilized, again, in time to answer the call?

One of those lesson not learned?

Easy. As one who at the age of 20 was limited to working in a segregated powerless black union with few alternatives through which to serve; I remember. I know that my own productive life and others like it -- over the decades that followed -- illustrate how much the nation was deprived of the talents and abilities of at least 30% of its human potential through crippling racial policies that denied equal opportunities to all of its citizen. There were(are) millions of Bettys with the capacity to contribute far beyond the limited expectations of institutions and industry -- both then and now.

Over recent history we've experienced the Civil Rights Revolution, Sesame Street (yes!), the premature deaths of President John Kennedy and his brother, Robert; Dr. King and Malcolm X, all by brutal assassination; the March to Selma, witnessed scenes of the Montgomery bus boycott; and a succession of little-understood and life-destroying wars in many places in the world. These have all been life-altering deeply traumatic national experiences. In response, we may finally be ready to mobilize, this time as an example to the rest of a world in peril that we, too; young and old, rich and poor, Americans of all races and cultures; that we truly understand our place at the helm of this lifeboat called Earth. Maybe we can still regain the respect of the world by meeting this obligation of true leadership by mobilizing once more -- this time for world peace and sustainability.

And at this point in my life I'm hopeful because we're finally having those long silent conversations that will help to heal us before too much more time has passed.

And as Rosie says,

We know that because we did.

Posted by Betty Reid Soskin at 11:22 AM No comments:

Interesting afternoon at MOAD (Museum of the African Diaspora) in San Francisco ...

It had been advertised as the first in a series of teas for women; in this case to celebrate a new book, "Wise Talk Wild Women," dealing with the positive aspects of aging. That should have been my kind of tea, right? Wrong. These were women just entering their 60's and trying to deal with it honestly and directly and for the benefit of Boomers who would follow.

During the course of the presentation by these two lovely African American professional women, I learned that there were " ... 3 waves of Boomers; those just over 40, those in their 50's, and the frontrunners; those in their early 60's." And here I sat among them having expected that the afternoon would be relevant to me and my life. In the course of their presentation I suddenly remembered with a start that I am the mother of 3 Boomers! I'd either missed my appropriate tea, or, by now my crowd has been thinned out drastically from natural causes -- leaving teas behind for the young.

Were these women holding their "Aging Tea" far too early, or had I just stayed stage center too long? I truly didn't know, but I found myself desperately struggling to restrain the impulse to exit giggling!

The exhibition of photographs of lovely maturing women taken from the book, and the marvelous setting of the museum (where I'd just renewed my membership) weren't enough to dispel the feeling that I may have "... stayed too long at the fair," and that there was little I could add to this gathering without seeming to be trying to upstage those who'd come together to ponder aging in a positive way. I've already aged but have never lost the sense of aging as a natural progression of living a life. Beside that, the wisest thing I might have added was the knowledge that my only real advantage was that I know how more life stories have turned out than anyone in that room!

But maybe that wasn't enough. I left quickly after finishing my tea and the good ladies ended their public conversation to an appreciative audience trying to be happy to be post menopausal.

Not sure what to do with that, but I'll figure it out.

Posted by Betty Reid Soskin at 10:24 AM No comments: