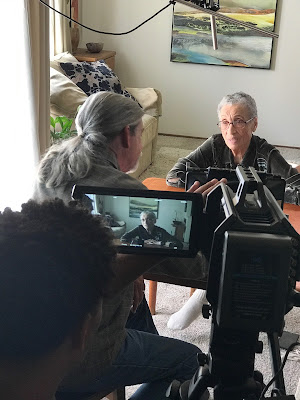 This was a day of filming, this time at home as the very private person that I am when not "rangering" ...

One of the fine filmmakers appeared with his team to conduct an on-camera interview to feed into the 30-minute work that is now nearing completion after  more than three years of shooting.  I'm learning a lot about filmmaking in the process, and since the producer, Carl Bidleman, tells me that they now have produced about 50 hours of work which -- after editing -- will become that 30-minute film for the National Park Service. The end may be in sight.

The release date has not yet been set, but I suspect that it might be late fall or early winter.

I imagine that the editing may be the most satisfying  part of the process, but I'm projecting here, and have no real sense of what really goes into filmmaking.  It was fascinating to see them -- after the actual interview was over, and just before the complicated set-up of lights and cameras were being disassembled -- they called for a "hush" while the room's ambiance was recorded through the cameras.  When questioned, Carl explained that this was needed for the editing, for blending fragments of scenes together without blank silences.

After this extended period of being filmed, it doesn't take more than a few minutes to forget the process,  the cameras, and hear just the questions -- and to react without self-consciousness.  I'd never have guessed this would ever be possible, but it most assuredly happens with experience over time, once those behind the cameras have become simply trusted and good friends, eventually, of longstanding.

What the end result will be I cannot imagine.  But maybe this works for me since I rarely spend much time in yesterday or tomorrow  (except when called for in my work).  There has always simply been "Now!" I suspect that this attitude is a holdover from childhood, and just something that I've never outgrown. 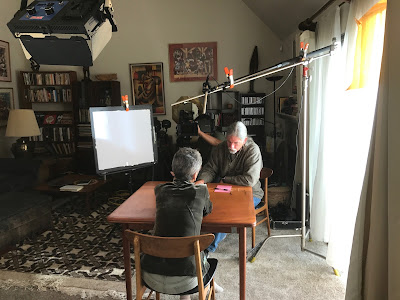 I've lived my entire life in a constant state of surprise, rarely borrowing from the future or regretting the past,  which tends to keep the present always alive and guess-worthy. Anticipation could not have improved this ongoing new reality that sets me right in the middle of the Art of Others, something that has become increasingly exciting as I've grown older.  I feel like an ever-evolving collaborator in training.

The filmmaking has become organic, much as my work with the National Park Service has become over time.  There, I'm but one element in the visitor experience which includes orientation films, life-cast figures, documentation of the Home Front Story, all the works of other rangers,  historians, writers, artists, fabricators, lighting designers, etc., and me!

It is also true of the book which is being set for release in February, and that is being edited by Jesse Douglas Allen-Taylor from a combination of my oral histories (archived at the Bancroft Library at UC Berkeley) and this blog.  It is in second draft stage at the moment, and is being published by Hay House out of New York, and will bring together their writers and editors with my collected words.  These often unrelated essays on cabbages and kings and (at times) pure rants, and sometimes, prayers, will become an amalgamation of all those talents and minds, and I will again be a part of something larger than myself.

A thought that has never occurred to me before this very moment:  What greater exit from this dimension than to simply disappear into the works of others?  That might be the perfect way to move gracefully into whatever immortality there is, just to blend seamlessly into the whole with little notice.  Maybe this insight has moved out from the subconscious to provide a rationale for whatever comes next  ... whenever...  .

Who on earth would ever have imagined that my little living room would become a movie set on occasion, and that I would become at 95 a "star" sitting at my dining room table comfortable in my socks and non-glamorous cotton trousers, and be as relaxed as a cat on a window sill basking in the noonday sun!

Betty Reid Soskin & Dylan Lew at An Evening with NatureBridge

Life is definitely not in sync with what's left of the old "Bod"... .

I'm finally beginning to sense myself as living in Leftover mode.  There has, until recent years, been just enough leftover pretty to feed my ego as needed.    I've lately become that 35 year-old woman trapped in an aging and shriveling body -- looking in the mirror each day and wondering what happened?

My self-image has become out of sync with what the camera captures, and it's disconcerting at best.  I don't mind having my photo taken -- countless times each week -- just don't want to look at them.  Maybe it's because my mother jumps in front of the camera lens every time, and she died in 1995!

Maybe this is the cost of continuing to live a life out of context.  The world around me grows younger with each day -- as I grow older. That just doesn't compute, does it?


Then I walked out of the front door and down the stairs (more rapidly than usual, just to show my neighbors might be peeking out from behind the curtains at that exceptional 'lil ole lady) to the mailbox and found therein a large manila envelope from Dr. Stephen Lockhart containing the recently published catalogue of REI, as promised, and I'm the centerfold in a story about the empowerment of women.

There was also a large white envelope holding a long letter from John Hartnett, a student of a museum class at City College of San Francisco who was in the audience of a presentation at San Francisco Maritime two weeks ago.  He was assigned to create a community engagement plan for an exhibition of a local museum with the goal of targeting a new audience, mostly the African Americans who are unrepresented in museum visitation figures.

He enclosed his proposal, asking me to provide some feedback ("... if time and your busy schedule permits").  His work is both imaginative and evocative.

In the same delivery was a long letter from a young Latina from Texas, Gabriele Contreras, who was responding to the NatureBridge Gala, a staffer, I believe, and it was a stunning testimonial that affirms my work in a way that places the concerns expressed about aging in the category where they justifiably belong, on the trash heap!

That I'm being heard at 95 is priceless.  The contents of a long memory bolstered by continuing insightful analyses based in Truth cannot be bartered, bought, or sold.  It is I who establishes the value on that, and no one else.  How I'm being seen is fully dependent upon external sources over which I have absolutely no control.  It is foolhardy to even attempt to influence how one is seen.

I need to be satisfied with the fact that -- when it was important to have those peacock feathers -- they were there.  I wore them well.  I lived a good part of my life as a very pretty woman, though it may surprise you to learn that this was hardly the way I saw myself at the time.  It's only in looking back that the obvious becomes clear.  I wonder just why that is?  Little came from that source except for the two husbands that I've out-lived,  both men who would have settled for far less than the complex woman that I was/am.  Most of my worth was recognized long after the "pretty" began to fade.  Physical beauty was little more than a distraction.  How fortunate that I've lived long and deeply enough to know that my tenure on Earth has been meaningful and far more grounded in reality than physical attributes would ever suggest.

... and when every breath is being laboriously breathed back into life through work of substance; after the last drop of juice is in the process of being squeezed out of the physical frame received at birth and re-shaped year-by-year -- when laughter is still a first response to it all -- this is what remains:

I'm being interviewed by our filmmakers upon return from the National Tree-lighting ceremony in Washington, and recalling a moment in the evening when I overheard someone explaining over the public address system why things were a bit delayed,"... we just heard that Miss Piggy is caught in traffic."  I was so deep into fantasy at that point -- the entire experience had become surreal -- that I remember thinking with all seriousness, "Someone should have told her not to drive!"


Pretty is a lovely thing to be, but is highly transitory when viewed through the rear vision mirror.

Posted by Betty Reid Soskin at 8:49 PM No comments: