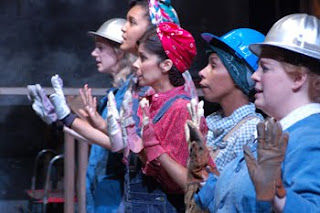 Posted by Betty Reid Soskin at 10:56 AM No comments: 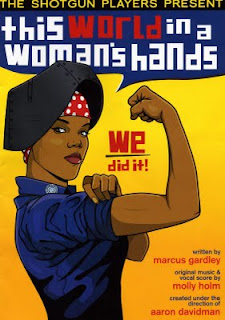 When playwright Marcus Gardley came to our offices about 3 years ago to begin the research for "This World," we met for the first time. Lillie Mae Jones (whom he'd never met) and I met in the course of my work for the State of California some years ago -- long before I became an employee of the National Park Service. Through the twists and turns of fate, it wasn't until yesterday at the Nevin Community Center when she rolled up in her wheelchair to sit beside me in the audience that I made the connections.

Marcus's grandmother came to the west coast from the deep south to work in the Kaiser shipyards. Like his grandmother, Lillie was one of the migrant workers who also answered the nation's call to join the home front work force during WWII.

Plain-spoken Lillie smiled quietly as the play unfolded. I couldn't tell what she was thinking. Not much gets past her and I was concerned about whether we'd gotten it right. Everything (for me ) hinged on her approval. All I could get from her as I tested quietly was, "it's in-trestin'."

I was reminded of an exchange we'd had earlier in the week when I stopped by prior to a scheduled meeting with a member of Redevelopment Agency. Months ago I'd begun to include the story of the Wisdom Tree on our bus tours. I'd recently learned in watching a rehearsal that the tree had become one of the important themes in the play and now it was important to document the stories I'd been sharing about it over recent years. The bus would stop across from the strip mall where it stood and I would relate the story that had come to me casually from several of those who knew of it (Judy Morgan, the long time president of the Richmond Chamber of Commerce; some of the seniors who were known to meet there from time to time) but I was beginning to be concerned that I may be passing on little more than rumor instead of documented history, and it was troubling. Future interpreters would need more than my word in order to incorporate the story into their tours.

I knew that, at that time, there had been many meetings before the city council when the property was being negotiated that would become the site of the new strip mall, and that there was much controversy surrounding the purchase. The owners of the site would not complete the sale unless there was a guarantee that the Wisdom Tree would be allowed to remain in its place for all time. We knew that it was at least 100 years old according to a botanist on our staff. Somewhere in the city's files there had to be a record of those proceedings. I would soon know after my meeting with a member of the Agency.

The day before that meeting I stopped by to check the story out with my Iron Triangle sage, Lillie Mae Jones, and -- in my typical somewhat stilted speaking style I asked what she could tell me about the tree. I then related what I'd learned, "...I understand that the men in this community have been gathering under those branches for decades -- since WWI. I understand that it has been an important male bonding site for almost 100 years." Lillie looked at me and with head down and chin thrust forward said, " ...them old turkeys been pee-in' on that tree for mor'n 50 years, I guess." I suppose that's another way of saying it, right? Only her way was far more succinct and to the point. Embarrassed, I could hear my own words in the echo chamber of my mind, and wondered when I'd become so pompous? That kind of stuff would never pass Lillie Mae's b. s. detector. Not in a million years!

I sat through the first act riveted t 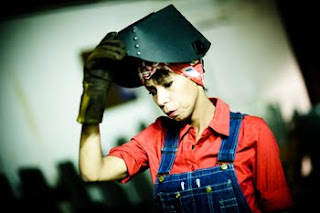 o the character of "Gloria Cutting," the central figure in the story, with Lillie at my elbow. This was her life. I noticed how the playwright had made his Gloria grow into an articulate activist during the course of the play - all the while retaining her gritty outer shell. I knew that Lillie had grown herself into a force of nature through a course of study with legendary political organizer Saul Alinsky, and had achieved a masters degree somewhere along the way. I knew that she had established a scholarship program with her own meager funds to see to it that deserving youngsters would make it into a better life than the one she'd known. That fund gave away over $17,000 -- given by businesses and individuals who shared her dream -- the last time I attended the annual awards banquet. She has operated her program for teens within the borders of this troubled community for many years, with or without the support of the city. Due to her long history of service to her Iron Triangle, there is a new housing development for the disabled that will bear her name to begin construction in October. For all that time she has been the bane of the redevelopment agency and any and all who've tried to contain or prevent her good works, or do wrong by those she deems as her people.

Lillie Mae was silent through most of the play but at one point something jarred her memory and she whispered to me, "...they give us jes twenny-fo hours to move out when they tow down the Projects after the wah." Then she laughed heartily as she added, "but we stole dey mattresses when we left!"

Marcus could never have known in the writing of his play that he was telling her story.

I wondered if she could recognize herself up there on the stage?

...and I hadn't made the connection until I watched it all unfold in "This World in a Woman's Hands" without proper stage lighting, sound, with a stripped down stage set consisting mostly of tall ladders, and all dependent upon the talent of 9 young women and their ability to bring it all to life for us to witness. The original music, the fine acoustic bass soloist, Marcus Shelby, who accompanied the stage action so smoothly and so well that I often forgot that he was there (weird compliment, right?). The direction was flawless. The music was jazz-based, and showcased the talents of singer/arranger/music director, Molly Holm, so-oo-o beautifully! The jazz elements were sharp and well-placed for effect. I was particularly impressed with the way rhythmic chirps and bleeps were used to create a racial separation at particular points in the script. It worked magnificently in one scene -- as all of the white women chirped their way offstage after a particularly divisive exchange -- leaving only the women of color on stage. There was a perfect integration of music with script. It never intruded but enhanced each step of the story line.

I will never forget yesterday, and of how grateful I was/am to have been sharing those hours with the most extraordinary ordinary woman of them all, heroic Ms. Lillie Mae Jones!

Now I'll get ready for the expanded theater experience of seeing it all again at their Berkeley Stage this weekend -- where I can do so without the distraction of seeing it through Lillie's eyes -- maybe this time seeing myself; for some reason I didn't seem to be up there at all. But I'm remembering now that this rings true since in the war years I had the same problem. It wasn't my fight. As an unsophisticated 20 year-old file clerk in a Jim Crow union auxiliary, I wasn't all that sure just who the enemy was, or just what sense could be made of any of it. I've never been convinced that there has ever been any such thing as a "good" war, or, that we were the "greatest generation." But I'm fascinated by this work that has allowed me the time and the resources to re-visit those years in order to begin to make sense of it while I still have the ability to re-live them through the arts, the talents, the souls, and hearts and minds of a new generation of seekers after truth.
Posted by Betty Reid Soskin at 8:43 PM No comments: