Dinner with the cast of tomorrow ... .

Earlier on Sunday -- while walking along the wharf toward the boarding area of Pier 6 -- past the tantalizing aromas of the Orient, Mexico, Japan, breads of every kind from several specialty bakeries fused with the floral scents of beautiful flowers everywhere -- my cell phone vibrated silently from my pocket. It was Rachel reminding me that tonight I'd promised to come to dinner to meet ... (then the static, the breaking-up)... and combined with the sounds of gulls squawking loudly overhead and the hum of conversations from nearby sidewalk tables -- her voice was lost. Figuring that she might hear me I just assured her that I would surely be there, around six o'clock, as promised. It sounded like something about a movie, maybe? Maybe home movies of one of their trips. But now it was time to board the ferry for the cruise 'round the Bay.

Rachel is a former co-worker, another field rep in the assembly office I'd recently left. Her husband is the Chief of Staff for Rep. Barbara Lee. He was formerly a member of Ted Kennedy's staff. A truly charming couple of youngsters that I am very fond of. About a year ago I was honored to be invited to be one of the readers at their wedding.

Despite some fatigue, I reached home in the early afternoon to find another message from Rachel on my home answering machine -- reminding me about the dinner this evening ... and, yes, I would go. I felt truly complimented by her persistence.

Arrived at their lakeside top floor apartment to find a small assortment of very interesting people, not the least of which were two beautiful young filmmakers from New York. This was the reason for the dinner. One, Shola Lynch, is a documentary filmmaker formerly of the Ken Burns team -- having worked on several of his PBS productions, "Jazz," "Baseball" The "Civil War," I believe, among others. Some time ago she'd gone off on her own to do the POV production of "Unbought, and Unbossed," the story of Shirley Chisholm, the first woman to run for the office of the presidency of the USA. That was in '72. I'd served as a McGovern delegate to the '72 Democratic Convention at Miami Beach. This evening held great promise.

Shola is here on a visit and in the process of pulling together her second individual effort -- the story of Angela Davis. She has the commitment from Prof. Davis (now on the faculty of the University of California at Santa Cruz), and will be raising funds and making the contacts to begin production on this new PBS piece. I believe that it, too, will be a POV presentation.

Around that table in the glow of candle light were Jeffrey and Rachel (staffers for Rep. Barbara Lee and Senator Don Perata), a Latino member of Lee's staff; a female professor of history and black studies at the University of California at Santa Cruz, a young public defender and his very pregnant wife who has left her teaching position at Mills College -- and is also an attorney. Then there was a public school teacher, and our two documentary filmmakers. I felt so privileged to be a witness to the future. These were the best and the brightest, and they sparkled with vitality and charm. It was easy to dismiss the earlier part of the day when I'd experienced the drop back into time that had the feeling of so little social progress and so much frustration; stagnation.

Yet, here it was. The future. In this world of late Sunday evening, among those young professionals were several "out" gays, two inter-racially mixed couples, this elderly activist lady (wise enough but surely of yesterday), and the two brilliant young New Yorkers from the new world of an expanding culture that I'm not sure those aging union Leftists are quite ready for. The world changed when we weren't looking.

I'd truly forgotten that the future can be seen right now. I knew that at one time -- especially during the Nu Upper Room days when I first was introduced to the world of Hip Hop (see earlier archives) -- that all one has to do to see how it all turned out is to step into the world of the young. I'd forgotten that. The old biases and prejudices have disappeared for the most part. In the world in that other dimension, much of the garbage has been dumped and the rules are fresh and new. Nowhere is that more evident than here in the Bay Area -- but you have to know what you're looking for and be open to the surprises that are everywhere.

I suppose it's partly the Blue States phenomenon.

We shared stories and gnoshed on the finest of cheeses and bread sticks -- drank wine from tall stemmed glasses, laughed a lot and -- eventually gathered around the table for a lovely dinner prepared by the man of the house. That, too, was refreshing. It was so unself-conscious and so "today."

Fell into bed at close to midnight last night feeling symtoms of whiplash from reacting to the the events of the day. Oddly enough, all of the irony of the morning's cruise as the only African American on board -- in the all white world of the labor movement had dropped away. In its place was the comforting feeling that in some strange way, we'd already won. The national transformation was well underway despite the most valiant efforts of the conservatives and the reactionaries and the Luddites to stop it. My generation and those immediately following on the time line will die away soon enough -- leaving this brave new world that is already formed and fully operative in its place. And I don't think it's fragile, either, but vibrant and venturesome and creating new edges for us all, if we've the stamina and the passion to take a look.

It was a glorious day -- and I'm precisely where I want to be in time and space and on the planet.

This morning I contacted the office of a former employer, Berkeley city councilman, Attorney Don Jelinek, who is the authority on George Jackson, the San Quentin prisoner who died in a hail of bullets in a prison yard shootout years ago. I wanted to alert Don to the fact that I'd referred Shola and that he should expect her call. Jackson figured heavily in the love, life, and times of Angela Davis and their story will now be told. Don recently completed his own book which contains much of his story. It may have been published by now. Shola Lynch will need to spend some hours with Don. This is another of those times when all the parts of my long life come together in these marvelous ways -- to connect with the lives of others and help to facilitate a very promising future.

Posted by Betty Reid Soskin at 8:46 PM No comments: 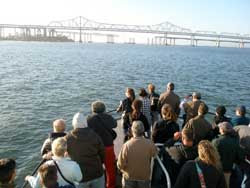 One long day of crossing and conflicting time lines ...
Rose early in anticipation of the bay cruise -- weather mixed -- the July inversion pattern brought the usual finger of fog through the Golden Gate -- but the promise of a burn off was surely indicated. It would be a glorious day on the water.

Met my friends for the BART trip to the embarcation point at the Ferry Building (what a wondrous gathering place that is!). We were greeted by jeweler's kiosks and street musicians -- hawkers and artists all ready for the invasion of Sunday visitors. The sidewalk cafes were filled with young people fashionably careless-carefully dressed in high-priced sneakers, muscle shirts, and tans that suggested faraway places (or simply many Sunday brunches on the wharf). Sunday morning in San Francisco is probably equal to the Trevi Plaza in Italy or the boulevards in Paris. Lots of cyclists everywhere and crowds beginning to gather for the annual Walk for AIDS to Golden Gate Park six miles away.

We joined those gathered at the entrance to the pier where our ferry would launch. I would be placed among the presenters -- historians on the Bay Area union movements, the WPA and PWA contributions to its development, authorities on shipbuilding and ports. And then there was Donna Graves, historian who has contributed so much to the development of the new national park, the Rosie Memorial at the Richmond shoreline, and currently gathering oral histories for preservation. And me -- the "Reluctant Rosie." The two other Rosies cancelled at the last minute.

There would be ongoing lectures as we took close up looks at the new Oakland Bay Bridge presently under construction while those currently working on it told us what that was like; the port of Oakland, the Alameda Naval Air Station, Hunter's Point, Angel Islands, and finally, we rounded the Richmond shoreline and ports, the SS Red Oak Victory, the Ford Assembly Plant under-going restoration, and those parts of the new national park that we could identify from the water.

Learned some interesting facts, like: the Port of Oakland was able to take over port dominance from San Francisco because 1) it was the western terminus of the critical railroads, and, 2) it was able to extend the port properties enormously through the good fortune of being the dumping site for all of the soil excavated for the construction of the BART tunnels years ago. And, that the ships that now bring in cargo in 20' containers from everywhere in the world are built large enough to accommodate 8000 in a single shipment. Due to their size, they can no longer move through the Panama Canal! Kinda like the WalMart of shipping. "Giganticism" has taken over the world. It's everywhere; merging corporations, banking systems, information delivery, Costco, WalMart, and now shipping! Every time I catch the sight of that caseload of Costco's toilet tissue that fills my bedroom closet's top shelf -- I have this moment of the giggles. Some folks put their money in stocks and bonds. Mine is in toilet paper!

All-in-all, it was a good day. I spoke my piece about the ugly racial climate of the period. Was surprised to see that these untold stories were, indeed, new information for many in that audience. For some of the obvious gray-haired and balding old Leftists, there were the nods of recognition. But it was quite clear that no one aboard this 3-tiered ferryboat would have considered themselves in any way tainted by such attitudes of racial superiority. These were the Progressives, after all. These were the veterans of the Boilermakers who'd worked to build the ships of the "Good War," and the Longshoremen who live still in the shadow of Harry Bridges who ruled the S.F. Waterfront during the early years of the struggles. These were the machinists and teamsters. Our captain up at the helm was a woman, after all, a proud person in a "non-traditional" role. Surely these were not the offenders. They listened intently and applauded enthusiastically when I finished my presentation; sassy and arrogant though it may have seemed to some.

...but no one appeared to notice that I was the only African American on board. And sixty years have passed since the period of segregation that I spoke of prevailed.

Despite protests to the contrary, one might have cause to wonder just why that is ... .


Posted by Betty Reid Soskin at 2:30 PM No comments: