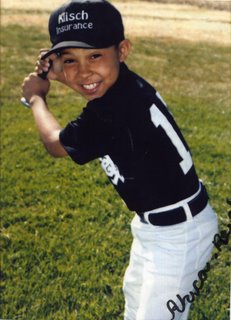 Reduce juvenile crime stats by one-third immediately? You're right. That's crazy. Or is it?

If we can agree that there is much profiling of youth of color in innercities -- largely from inequality rising from abject fear coming not only from the adult population -- but from the police as well, then we have a place to stand while we debate the issue.

The city I live in is reputed to be "the most dangerous city in the state of California" with a murder rate of 47 for this year and climbing. Enough legitimate reason to be fearful? Maybe. Maybe not.

I lay on my sofa and watched the city council meeting on cable television last night -- between my feet -- one of the best shows in town. The fact that we're in an election cycle with only a few months to go made for some rousing theater. There was a familiar ring to proceedings -- the same arguments and the same complaints expressed that drove those pre-election campaign community meetings in South Berkeley years ago when I was doing my community leader thing (and getting nowhere) until I started to see through the charade.

At that time it was drugs and crime and drive-by shootings and abusive police power and weeping mothers and grandmothers -- and (oh God!) empty promises of social programs and job-training -- and that was in the Seventies. There were also ambitious political wannabees devising "Campaigns of Hope" (this time it's called "Safe Streets") designed to exploit the very real fears of families struggling against poverty and drug and alcohol addiction spawned by hopelessness and institutional racism that was by now so cleverly masked that it would take the smarts and sensitivity of an Einstein or a Thomas Jefferson to see through it all; and all for political gain. The more things change ... .

Is the awful stuff real? You bet it is. Is that all there is? Absolutely not. In the years that I've lived in Richmond I've never seen a drive-by nor a mugging nor have I ever been attacked or had my house broken into or my car hi-jacked. Is that real? You bet it is. So -- as it was in South Berkeley -- I get to choose my own reality. And I do, and what I choose is what guides my life in this town. I move about without fear for the most part. Occasionally I drive north to Mendocino and become aware of the tension only as it drops away, and I'm grateful for a few days of drifting and not having to push the river ... but that doesn't last. After each drive back through that beautiful country and into my troubled city I'm anxious to get back to a place where I have a sense of the aliveness that comes with doing meaningful work that allows me to bend into the winds of positive change with others who live with similar intentionality and purpose.

Now about that first sentence about a dramatic reduction in the crime rate and number of troubled kids:

In a study done in Hennepin County, Wisconsin, a few years ago it was discovered that the first encounter most young black and brown men had with the criminal justice system was not for drug use and/or possession at all, but through traffic violations. Yes, traffic violations. Teens would be cited for a speeding ticket or for driving without a license -- a busted out tail light -- or simply for driving while black or brown. They had no jobs so had no way of paying the fines -- nor could they approach their struggling family for help (now dropped from the welfare rolls due to welfare reform) -- so would simply not show up at traffic court. In a few months that fine would double -- then triple -- and eventually a warrant for their arrest would be issued. (You're getting ahead of me.)

Meanwhile, the seduction of getting a few rocks of cocaine or an easily concealable packet of crack to sell was too great to resist for long. This served as an easy way of getting out from under their traffic problem and jump started their street careers. As often as not, if they're successful, they now have the ability to alleviate some of the stress on their debt-burdened parents and siblings by contributing to the household income, or, now they can start one of their own. "Manhood" has arrived prematurely, and with a kind of status that cannot be attained by any other means. They've now entered the world of the underground economy fueled by illegal drugs.

Hennepin Country addressed the problem by bringing together the probation officers, the community policing experts, social workers, psychologists, etc., and together they devised a plan to create a program of amnesty that would give young people a clean start, would expunge minor violations from their records, to see what might happen. The results were dramatic. Where they'd expected a few hundred to turn up, they were faced with a couple of thousand, and a breath of fresh air blew through the county as the percentage of young people outside the law suddenly decreased dramatically.

What would happen if a similar program came into being here in Richmond? Instead of the constant fear of discovery and threat of punishment -- recreation and job-training resources would (again) be available to young people as entitlements and not because they had to be defined as being "at risk." What if the professionals in social services, public health, and law enforcement got together and granted amnesty for all misdemeanors and crimes of possession and traffic violations and gave everyone a fresh start? They would not have to check "yes" to ever having been arrested on job application forms, qualifying them immediately for employment opportunities otherwise beyond their reach. What if (like the homeless man who shoplifted in order to have himself jailed because that was the only way to get a shower and clean clothes) those kids reduced the "criminal element" by one-third simply by being accepted back into the mainstream where love was an entitlement and where fear was reserved for the Saturday matinee at the Bijou multiplex?

By so doing, we would have instantly reduced the universe of truly criminal and seriously dangerous to a significant degree, a number that might then be manageable. We would have calmed the panic and dread that I watched last night from those parents who have suffered the loss of kids who didn't deserve to die at the hands of other kids who've been robbed by a fearful public of a sense of belonging -- and didn't deserve to be doomed to life behind penitentiary walls.

Long before those young people pulled those triggers -- they'd lost all sense of connectedness with the rest of their communities by being placed in prison-like schools where they were fed messages of hate and rejection until they completely internalized the soul-destroying toxins. We may be seeing the first wave of children who were crack-damaged en utero -- now grown to young adulthood. That's a public health problem and must be faced as such or we'll continue to build penitentiaries to house them where the annual costs per prisoner would pay their way through Harvard!

One only has to watch CNN on any given evening to see how cheap life has become. Richmond is not yet Kabul or Beirut, but I'm not sure that our kids can tell the difference. And in a world where the bully is now king, and amorality has become the accepted underpinning of international diplomacy -- what hope is there for any rational means of addressing conflict for us, much less for our children?

I'm hoping that we might soon stop looking at the problem and start looking at the kids. There's at least one member of the city council who might listen. I'll send him an invitation to lunch one day next week ... .

Photo: My brilliant Little Leaguer grandson at about the age of 10 -- with a great passion and a bright future ahead in sports. He's now a much-loved but deeply troubled 18 year-old, trying to find his way in a world that does little to allay his confusion and inner pain. And ... I don't know how to be helpful, except to let him know that I believe in him deeply and in his ability to eventually overcome our collective heartless insensitivity to the plight of today's young people.

Posted by Betty Reid Soskin at 9:16 AM No comments: