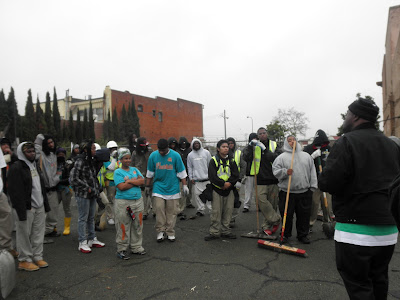 Off into another year of unknowns and untested days, weeks, and months -- another gift of Time ... .

Our staff has grown considerably over the past 3 years and adjusting to just who I am and how working in this new constellation effects my work is a question to ponder.  We've had 3 superintendents over the 6 or so years of my park history, and -- not only are there more than triple the number of staff as when I started, but there are positions now that have never existed before.  Coming so late into the National Park System means that I will probably never feel a part of the culture, and that has both its advantages and disadvantages.  I'm less representing the park out in the community than I am the community's person within the park system -- and that feels right -- as it should be.

I'm working among relatively young staff who come from a wide range of experience in both urban and wild places, and many who are having their first west coast experience.  On the other hand, I'm working in a place where all but 6 years of my entire life has been lived within a 30 mile radius.  And, my age -- which places me among the dinosaurs -- also means that I am a "primary source" in terms of the WWII era being enshrined by this park  As such, I continue to have a legitimate place among the young with whom I'm actively engaged day-to-day, and the sense of being an "anchor" in some ways.  Just hope I can avoid having that anchor turn into an albatross -- for which I'm ever watchful.

There are four parks under our management team (John Muir, Eugene O'Neill, Port Chicago, and Rosie the Riveter),which presents a variety of visitor's experiences as well as a fascinating variance in interpretive demands on each of us to be informed and actively defining "the work".  This is especially true for the newest of our 4 parks -- "Rosie." 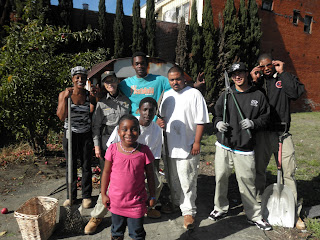 So how on earth do I fit Lily Mae Jones and her kid's violence prevention nonprofit, CYCLE, into the matrix?  Not so easily, sometimes.  The NPS has its own great programs that have been tested over time, Junior Rangers being one such.  We have another under development at Rosie that is training a group of teens to be civic ambassadors under the direction of a very capable ranger co-sponsored by the City of Richmond (with stipends) which is designed to serve 8 young people in a year-round training that will serve their needs, the city's, and the park's mission and interpretive goals.  With civic partners, we are also in the third year of development of a very successful summer program for middle school girls which is Rosie's Girls, which gives girls in their early teens a taste of non-traditional occupations ordinarily limited to boys.  That serves 2 groups of about 20 youngsters daily for  two cycles of 3 weeks during the summer.

On the other hand, there's Lily Mae Jones with her 50 to 85 young people (18-22) gathering together on weekends in a program of their own making.   Those efforts have been stymied by lack of materials.  Roots could hardly be more "grassy" than theirs, but except for my informal attempts at marrying the aims of the City and the NPS under a very broad interpretation of "civic engagement",  their enthusiasm will remain untapped.

Learned yesterday in a visit to Lily that the program that supplied the young people (YouthBuild) has been temporarily stalled, and the director sacked!  I'm hoping that this is simply a rumor,  but then I recalled that this is often the fate of city-sponsored programs.  They're usually initiated in the early days of each incoming administration because newly elected officials have campaign debts to supporters who've worked hard and must be rewarded with appointments.  The easiest way to do that is to be named to head fragile programs -- mostly those designed to serve youth who haven't the political power to prevent the gutting.   They're a weak constituency -- unlike that of Seniors, for example, who've learned to scream hard and loud, and march on city hall, and who vote!

That bridge that I live on between federal and city -- community and national parks -- may be primarily responsible for last week's plunge into depression.  It's that feeling of recurrence of problems long thought "dealt with", that keep showing up as though for the first time.  This is surely the nature of life and a function of aging.  Of course, I've been here before -- and many times.  And, should I live so long, will turn up again.  But what is also true is that each time there are new possibilities; new tool kits to test; new technologies to explore; and new minds to unite with in finding answers.

Among the new staff members are, potentially, those with new insights with whom I can add my tested and true political experience and, together, we'll add our voices and energy to that of my "Iron Triangle Gatekeeper" friend, wonderful and altruistic through it all, Lily Mae Jones, in her persistent efforts to reduce violence among the young of her community.
Posted by Betty Reid Soskin at 11:42 AM No comments: