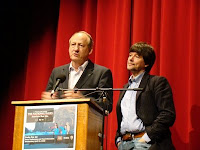 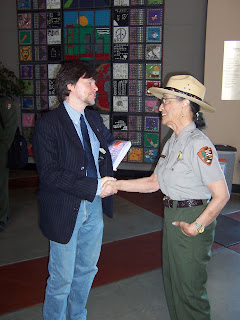 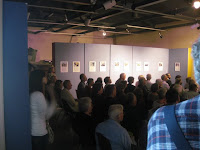 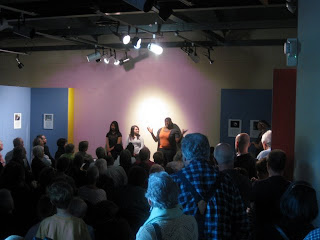 Uncompromised truth has its day ...

Leaning against the wall yesterday at the premiere of the "Untold Stories" (trying to be as inconspicuous as possible) it dawned; the effect this newly-created national park is having on this city. The insistence upon total honesty as we re-visit the era of what is remembered as "The Good War" has proven to be unquestionably wise. The epiphany came at a moment when our mayor rose to honor the young high school students, Crystal Johnson, 18, Sara Moran, 16, Maria Esparza, 17, and Veronica Godinez 18, in the ceremony following the viewing of their production. I suddenly could see that everything was dependent upon through which lens that history was being viewed. Mayor Gayle McLaughlin, as one voice of many sincerely dedicated peace activists, is seeing it through the lens of the brutal and senseless carnage of war; though one facet of the greater story.

It would be understandable for Kaiser Permanente Corporate leaders of today to view that same history primarily through the remarkable industrial achievements of Henry J Kaiser's total re-structuring of the shipbuilding industry; a history that has had profound implications throughout the years since ... years of unprecedented progress in so many fields -- preventive health care, early childhood education and development, union/management relations, mass production and prefabrication systems.

The Ken Burns documentaries and The Saving of Private Ryan are important if the lens used was one exploring the body count stories; those of human degradation created by armed conflict; our known human capacity for violence and brutality; military sacrifice and heroism. All are critically important to the telling of the story of WWII, but those are not Richmond's story. Those were not the stories that the teens had given up a year's worth of Saturdays to tell.

Rosie the Riveter WWII/Home Front National Historical Park is providing the narrative of the "Great Mobilization"; the coming together of people from Everywhere, USA, in response to a world threatening international crisis. Those years saw the creation of the cauldron into which the nation's conflicting social mores and patterns were cast resulting in two decades of life-changing chaos out 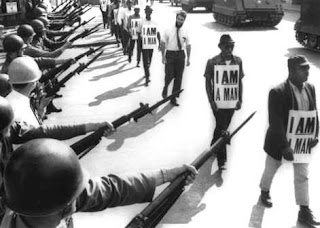 of which the causes of civil and human rights were painfully carved bringing us more in line with the promises of our founding documents and loudly-professed but sorrowfully unfulfilled national ideals.

Since 1776 we've been a revolutionary country painfully at odds with a set of core principles and values for which we've been willing for generations to fight and die but by which we've miserably failed to live. We've deceived the world by holding out a tempting imaginary chalice of peace and freedom while holding to contradictions and an arrogance that denied their ever entering into our reality. The WWII home front mobilization and subsequent struggles for redefinition forced us to move through to a more honest alignment with those core beliefs. But -- as a nation of diverse ordinary people in transition -- it all happened with mind-numbing speed -- far too rapidly for us to process.

It is that story that Richmond tells. By initial attempts such as this important work by these young women, we're building a bridge back to that period for us all to re-visit. They're helping us to build a baseline against which to measure the dramatic social changes that have brought us to a new and more enlightened national ethos. Those years (1941-1964 and bey 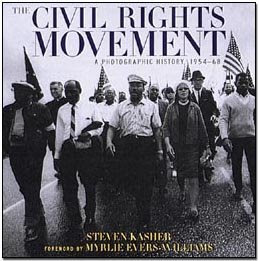 ond) forced us to re-examine the relationships between human and civil rights and even the possibility of a world at peace. Without the insistent stress upon the everyday lives of ordinary people living in extraordinary times -- without the urgent demands of the war years to find ways to live and work together despite a non-supportive and unforgiving social system -- and without their persistent and sometimes combative resistance to continuing to any longer endure the contradictions, the nation might never have reached this place of transformation.

"Untold Stories" revealed the raw material from which the new understandings have been carved. Out of such sorrowful history world peace may yet be born. I believe that the City of Richmond provided the background against which the country first began to confront its contradictions and correct its course -- entering a period of 20 yea 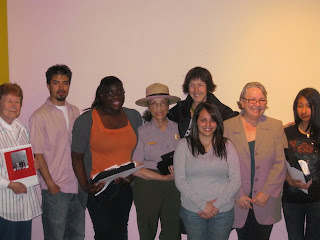 rs of social upheaval --echoes of which still resonate from our nation's lecterns, pulpits, and town squares. We're still a work in progress, but yesterday's gathering at the Museum suggests that here in this place -- after 6 decades of accelerated change -- this relatively young community of strangers is still asking the right questions, and through the National Park Service, the nation is listening.

Meanwhile, those awful wounds born of hatred and racial injustice are best cauterized by Truth.

Perhaps Rosie was more than a mere riveter, but the ultimate symbol for change of a kind that we're only now beginning to fully understand and appreciate; understanding provided by yet another set of lenses -- those of 4 young students exploring their history and (hopefully) being awed by both what we've endured and how far we've come.

Note: You can be there by clicking on the thumbnail for enlargement.

Posted by Betty Reid Soskin at 12:30 PM No comments: