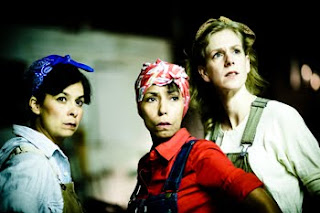 There are times when I feel like a yo-yo. That may characterize the past few weeks as I've bounced from highs to lows and back again with little sense of control over events or my reactions to them.

Lay awake last night wondering about just how it is that life as lived within my skin carries with it an entirely different reality from the lives of those around me?

I wrote in an earlier post about the dozen or so young people from a youth group known as C.Y.C.L.E. directed by my intrepid friend, Lillie Mae Jones, from her motorized wheelchair. She'd brought them to visit our offices to experience my presentation, and to walk the Rosie Memorial at Marina Bay Park. There were perhaps a dozen teens. Only a week or so later, a 17 year-old ready to enter the community college this fall was shot in the back 5 times but survived. Two days ago I dropped in to visit with Lillie as I often do when time allows. Lillie is the Iron Triangle district's gatekeeper and a fearless advocate on behalf of its children.

Lena answered the door and warned me that Lillie Mae wasn't alone. When I walked into the room there was a police officer busily taking notes as she grimly answered his questions. I didn't stay, but backed out of the room as inconspicuously as I could manage.

Within a few minutes I'd learned from Lena that a second one of the teens with whom I'd shared that visit to the memorial had been shot a few days before in Fourth Street park. This time it was a 16 year-old who is still hospitalized and (hopefully) recovering. That would be 2 out of 12 -- and are those not deadly odds?

I recalled then reading about the city having made the decision to increase police presence in the Iron Triangle. And then I remembered Lillie's words, "Betty, the Nevin Street Community Center closes every day at five o'clock." The Nevin Center is located in Fourth Street Park. "There's absolutely nothing for these kids to do around here." "The Center closes and they're still hanging around," she continued in frustration. Her fists tightened in her lap and her eyebrows gnarled. It seems ironic that the Nevin Center was recently refurbished to the tune of hundreds of thousands of dollars -- new landscaping, entrance changed to face inward to the park, fences installed between the children's playgrounds and spaces for teens and elders; all for a park that is closed to idle young people evenings and weekends.

It was so obvious to me. Hiring playground directors and program people for the recreation center so that it might be kept open until ten o'clock or later with basketball, homework assistance, games -- both indoor and out -- would surely go a long way toward changing the environment in the Iron Triangle. Would that not be economically more effective than hiring more highly-paid cops? Every community center in the city should be open in the evenings; everywhere throughout this troubled city. But then I realized that I hadn't realized that they were closed. Does anyone else know? If adolescents are expected to be in school during the day, and schools have eliminated music, arts, and most athletics due to state budget cuts, and the city-funded recreation centers close at 5:00 pm, what good are they except as gathering places for pre-schoolers and moms? 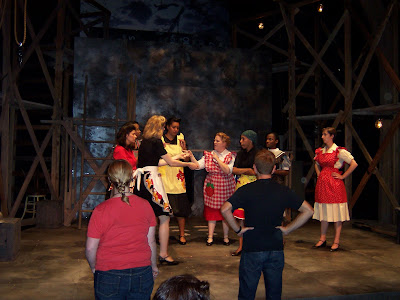 For the first time I found myself wondering (while drifting off) if I couldn't effect some of these weird decisions and be more helpful to the community were I more of an ordinary citizen. Maybe it is time to retire and try to bring some of whatever-it-is-that-brings-me-such-acclaim to promote some change of the kind that Lillie Mae Jones has given so much of her life to? And how on earth can I make a difference from my current position? Can we ever make this park truly relevant to the people who need it most?

I remembered then that - as I was leaving Lillie said to me in great earnestness, "...please don't quit your job, Betty, that was the worst thing I ever did. You're doin' good work."

Today at 3:00 o'clock I'll be in the audience for playwright Marcus Gardley's "This World in a Woman's Hands," a work based on his African American grandmother's experiences as a migrant worker in the Kaiser Shipyards during WWII. The play will be held in the Nevin Center of Fourth Street Park in the Iron Triangle, is free and includes dinner. It will run for 3 matinee performances, today, tomorrow and Labor Day. This will be its premiere before opening for a full run at the Berkeley Stage of the Shotgun Players theater company through September and into October. I attended their final rehearsal on Monday evening and can hardly wait for the full experience as a part of a live audience in the place where those lives were lived.

I'm hoping that the community's young people will be well represented in the audience. They truly need to be made aware that they are the descendants of the extraordinary ordinary people who helped to save the world from Fascist domination 69 years ago. I believe that this Gardley play can provide some of the background that's been missing from their history books, and that has tragically cheated this generation of youngsters of their rightful legacy ... the sense of belonging ... the feeling of being part of something larger than themselves -- that thing that provides the sense of worth that gives life meaning and that just might possibly provide for today's children the now-missing will to survive in an often unsympathetic world; a world where their only power seems to be the ability to instill fear in others.

.. and I suppose that I'm one of the still-living links between our times and theirs ... would that be enough reason to continue doing the work? Maybe so, if only because I'm convinced that real change comes not from edicts nor from mandates, but through the arts in all of its forms. And that as long as I can act as a conduit through which those connections can be made, there is a reason to continue.

I've been invited to participate in a community mural project by a contractor who is working with the Richmond Art Center ... and there's the newly-formed committee to give greater visibility through the arts to the tragedy at Port Chicago ... over the next year and beyond ...

Yes!
Posted by Betty Reid Soskin at 10:00 AM No comments: 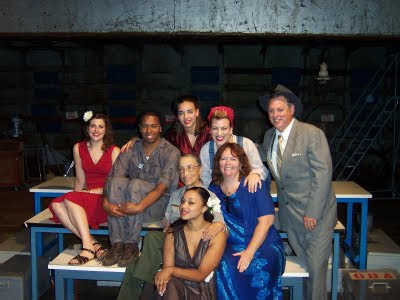 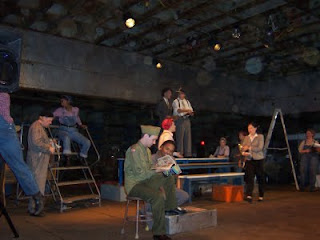 Posted by Betty Reid Soskin at 9:19 PM No comments: