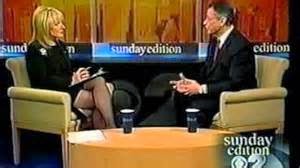 As it is with news magazine shows, late Friday evening we received word of the postponement of our segment on the Weekend Today Show ...

... and I experienced feelings of both excitement and relief.  Major news events had crowded out the prepared piece, and it will be shown "sometime in May", according to the producer.  "It's completed, and is great," says she.

After  eight hours of shooting, and the subsequent requests for additional photos and relevant information -- I'd completely lost any sense of what would be shown.

I was beginning to wonder if I'd remembered to comb what hair I have left; whether I'd checked my makeup after a full day (hadn't looked into a mirror since leaving home that morning); and all those things that fill the time after you've spent endless hours being on camera.  There were long stretches when I'd forget the crew was even on site, or that I was wired the whole day as I conducted my bus tour (had I said anything that might later prove embarrassing?).

It would have been great to have risen this blue-skied Sunday morning; viewed the footage along with the nation as it watched; and had it all behind me.  Now the period of nervous anticipation has been lengthened, and the doubts will continue; maybe not.  There's a level of disbelief to it that persists, and I really do forget the continuing public exposure in the course of my work days as things settle into my new normal.

And that includes word from our superintendent announcing that he'd received a request from the Guardian (and I mistakenly associated that with the Bay Guardian - a SF newspaper) from the UK.  They were seeking a 30 minute phone interview to be used in connection with a travel show aired in England.  "We'll send questions by email, and set a time certain if she will accept."  I said yes.

The same day I'd just responded to a request from a State University of New York (a "... small college with a student body of around 2000") for me to deliver the Commencement address at their graduation ceremonies of May 2016.  What an honor!

My response was to live rather immodestly with the sense of importance it afforded me for a few days -- let the warmth of it wash over and stoke my ever-aging ego before sending regrets.  "... While I enjoy excellent health at 93, to accept such a commitment for a full year in the future would be tempting Fate," says she.   (You'll notice how readily I slip into referring to myself in the third person these days).  I no longer plan ahead more than six months, and this proposal more than exceeded those self-imposed limits.

Meanwhile, someone on the faculty of the University of Oregon has discovered my blog and -- on the strength of that interest -- has invited me to travel to their campus some time this fall or winter semester to present to their classes.  The NPS will grant permission, and plans are being made for me to accept their invitation.  This is a pleasant reminder of my visit to Humboldt State University in Northern California a few years ago, and of how exciting that was, and how it felt to be interacting with students and faculty women who were doing such amazing work in Feminist Studies.  I've accepted and am waiting for next steps.

Who says the Golden Years can't be quite the best ever?

I just have to be careful not to ever buy green bananas ... .
Posted by Betty Reid Soskin at 12:43 PM No comments:

My first great grandchild, Patrick Kayden Hebert is now capable of these morning conversations with his Mommy as you can see ... .

... and I'm serving notice on the nation that I'll give y'all about a dozen years to get your act together enough so that these chats don't have to consist of warnings of how to act should he encounter problems with authority, "keep your hands always in sight!" etc.

At this point he's being loved unconditionally, and is interacting with his environment with complete trust.

I'm praying that I and others of like mind have done enough world-changing in our time to give him and others of his generations at least an even shot at success in life.  And, that the necessary social changes keep pace with global warming and rising sea levels that are no longer debatable.  That's a lot to ask, but ask it I shall.  His precious little life may well depend on it.  Today's headlines (Ferguson, Baltimore, New York, Cleveland, etc.) would suggest that we have a long way to go before progress is measurable, but I'm optimistic when looking back at past successes that I've seen over a long lifetime.

Of all of the little boys like Kayden, one or another may have brought into the world some of the answers to the unprecedented problems we'll be facing in the next decade or two.  We know not just who they are, but we cannot afford to not give each the greatest education and opportunity to contribute if we're to save ourselves and our place in the universe.

Wish I could hang around long enough to continue to influence what comes next ...  .

Meanwhile, the work goes on, and the thing that I'm fighting so hard to forget is the fact that at a recent off-site presentation -- during the Q&A following my talk, a suburban woman in her middle years raised her hand to declare proudly before an all-white audience, "... I watched The Help twice, and I even read the book!"
Posted by Betty Reid Soskin at 12:01 PM No comments: