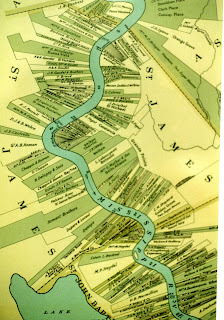 What a freeing insight ...

Over the past weeks I've been pursued by a high local public official who is anxious to have me co-host a television show for local consumption that will focus on African American leaders who've contributed to history over the decades. These would be the high achievers from the world of athletics, business, politics, education, etc., a kind of "Ebony Magazine" of the airwaves, I guess, with its ever-constant listing of "First African Americans to ... whatever," or "Most eligible ... whatever," and "...... breaks the colorline!" All persons to be proud of, I'm sure. I guess I'm waiting for the day when all of that will be ordinary and no longer news at all, because entry to the board rooms, the athletic fields, and the halls of Congress will have been opened wide to all, and when only merit will count.

I managed to find many ways to say "no," without having much sense of why I felt so reluctant to join him. About the third time he approached me in my little cubbyhole of an office I had decided to add to my refusal a recommendation as a way to pass the opportunity along to someone more in need of public exposure -- someone who is young enough to still be building a resumé. It wasn't hard to come up with some possibilities that I was sure had the ability, the personal charm, the ambition, and the time to take this on and develop a new edge to their career goals.

He refused, and worked hard (mostly by appealing to my ego) to convince me that only I could provide what his vision of a fine program needed. And only I knew that was silly.

Woke this morning realizing a wonderful thing: I'm feeling completed these days, with a sense of no longer becoming. I've entered a stage in life where I'm now simply being! There's still a lot of work to do, don't misunderstand, and I'm spending my days fully occupied in the process of "downloading" back into time everything that can be transferred back. However, I no longer need any new starting places -- I'm busy tying up loose ends in the effort to "... leave the place better than I found it." And there's nothing morbid about it, I'm doing a hell of a job of giving back and I've found a venue in which to do that and am being given the platform and the tools that make it all possible.

I was aware in the dawn's early light that the lives of my enslaved greatgrandmother, Leontine Breaux Allen; my mother, Lottie Allen Charbonnet; and I, Betty Charbonnet Reid Soskin -- represent a span of time that embraces everything -- all of the wars and social struggles and lynchings and fights for equality -- from 1846 through 2007 -- just those three lives. Leontine was born in 1846-1948; mother's life spanned the years from 1894-1995, and I was born in 1921 and am still around at 85. How I would love to have been able to see their stories (through the wonder of technology) as much in detail as I've been able to write of my own here in this journal. Mamma could neither read nor write, her non-status as a slave prohibited it. She was freed at the age of 19 when the Emancipation Proclamation was signed. My own mother, Lottie, was barely able to read and very deliberately "drew" my school notes in scrawling rounded letters with a tightly-held pencil, having been taught primarily at night beside the oil stove by her (not much older) Aunt Alice. She grew up as a part of Mamma's household where there were many children -- all needed to work the fields to raise the food for survival in that small shack beside the levee in St. James. Interestingly enough, Aunt Vivian -- mother's younger sister -- before joining Papa George et al in Oakland in the Twenties, completed high school at Xavier in New Orleans then attended the University of California at Berkeley where she studied for 3 years. Aunt Vivian was a primary influence in my own life. We all adored her.

Yet here I am in this year 2007, with a luxurious feeling of completion -- as though I've enough superfluous life and talents left over from a life filled with trial and error, tragedy and pain, but with triumphs and personal achievements enough to balance it all out -- enough to be able to leave behind a personal legacy that may enhance the lives of my children and theirs -- and through my current work -- the lives of others. And most of it is in intangibles -- those things which are a part of the world by virtue of my having passed through ... and I'm here by having entered through the wombs of those strong and good and forgiving and ever-reaching-upward heroic African American women.

How much better could life possibly be?

Photo: This is a map of plantations -- all bordering on the Mississippi River. This was not dated, but is presumably sometime before the Civil War. The plantation of which Leontine Breaux Allen's little narrow piece of land is here -- at the edge of the Breaux Plantation. Land owned by her father, Eduoard Breaux, a Cajun planter. It was here that my mother grew up.
Posted by Betty Reid Soskin at 12:17 PM No comments: 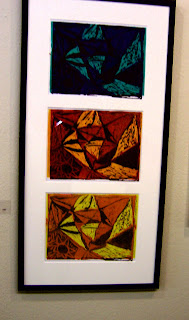 Have been working hard all week on a project that grew out of our trip to Little Rock last fall ...

Many entries back (around October 22nd) I mentioned the hope that we could find some way to bring together those wonderful Central High students with students here in West County in a dialogue around civil rights. It's going to happen, though not in the form first considered. I'm working now with school district folks here to create a teleconference that will accomplish something similar, if a little less impressive. The cost of moving students around was far too costly for both school districts, but what with the technology available to us, such a conference is not only possible, but in the works even as we speak.

Since Central High is not only a highschool, but a National Park site as well, we have the infrastructure to work with and we've found a positive response from everyone.

This fall will see the first annual Home Front Festival here in Richmond -- and simultaneously, Central High will be celebrating the fiftieth anniversary of the Little Rock Standoff. To bring kids together to talk about that will be absolutely mind-blowing! Central has been doing an oral history project whereby students have interviewed parents and grandparents who were a part of that dramatic history.

Richmond has yet to process its World War II history and the arrival of racial segregation that came as the result of the city growing from a sleepy small industrial town of 24,000 to 108,000 -- mostly blacks and whites from the southern states --- in response to world events and the needs of the huge war effort. The great migration brought with it changes that are still being lived through and by an unknowing population that has had little opportunity to learn the lessons of the monumental social change that ensued. Today's Richmond children have had little connection with the lessons of the past, or of the heroism and sacrifices endured by their parents and grandparents during the war years.

What an opportunity this presents to re-examine that period, and how to put shape to that important debate is what I'm struggling with right now. Everyone says, "Yes!," but finding the way to implement what we all see as a golden opportunity remains illusive at best.

As an outreach specialist for the parks (on a contract) I'm clearly in a position to open the doors to possibilities and to bring together those who can actualize the vision. Beyond that I'm relatively helpless to deliver. I've met with the president of the local community college, have appointments with a former member of the school board and the superintendent of schools for the county -- that's next week. I'm in touch with the teacher/counselor of the kids at Central High and the National Park Service staff in Little Rock, and with some of the media people here ... but once I've done my part -- it must be implemented by the educators, and only the educators. Knowing when to pull back and let go will be the challenge.

Photo: Another of Dorrie's works, this one is a tryptich (sp.?), of linoleum block prints that I bought to hang when I can find the time to re-arrange my growing collection ... .

Posted by Betty Reid Soskin at 3:27 PM No comments: 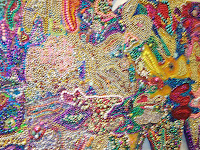 My daughter, Dorian Reid's, stunning art pieces were among those featured in a new show ...

It was wonderful to be reminded of some of the great things in the world this weekend -- after hours on end of exposure to the Don Imus craziness and the wierdness of having the entire media repeat over and over and over those hated words "nappy-headed ho's" as if doing so would cleanse them of their toxicity. It didn't. The insult was compounded and made the more egregious as time wore on.

What got lost was something I kept hoping would surface and rise above the din. It never did. And it was this:

Ten years ago the effects of the Imus transgression would have created a minor ripple but would have faded quickly into the background noise. Ten years ago corporate board rooms, newsrooms, broadcasting corporations were made up largely of white males. What has come is diversity to the workplace. In case no one has noticed, Affirmative Action has been and is being a resounding success!

In the aftermath of the Imus debacle, outrage within those corporations -- now integrated by both race and gender -- dramatically changed the outcome. Both NBC and MSNBC brass were confronted by women and racial minority staffmembers who demanded Imus's head! Not only the upper ranks of cable networks, but front offices of advertisers are now racially integrated and women and people of color are now in positions of relative power, and in large enough numbers to make a 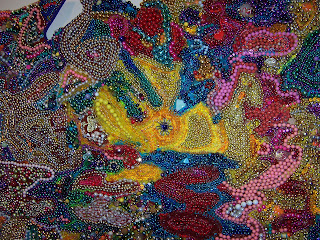 difference in matters of consequence.

That's the story that I've been missing in the aftermath. But I'm sure that someone will notice, and soon.

The Imus defenders are largely male, with a few notable exceptions. The female quislings -- Ann Coulter et al, appear pretty ridiculous as they continue swimming upstream against the majority of their gender -- which makes their positions the more glaring and ridiculous. There is also the usual complement of black conservative apologists for whom this is an unexpected windfall -- providing more ways to promise to bring the "Brethren" around; as if ... .

Now, maybe we can get back to appreciating the finer things in life, like the beautiful "outsider" art of the mentally-retarded. Is anything more stunning, more pure, ... or more directly from the heart; uncontaminated by either intellect or cleverness?

Photo: These are sections of a large (4' x 5') wall-hanging that is composed of Mardi Gras beads glued to canvas in a colorful free form that Dorian calls "Dragon." She had several pieces in this show, several of which were sold ($295 for this one)-- with half going to NIAD (National Institute for Artists with Disabilities) and half to the artist. Click on these thumbnails to get a closer look. They're exquisite!