Here 'tis! Ten feet of imagination and love -- in a direct line from the heart ... . 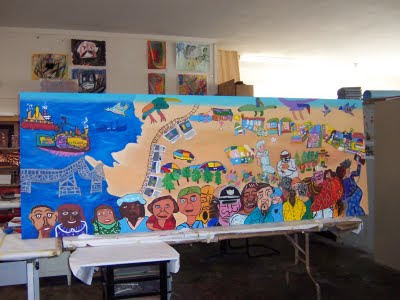 It's all there; the bridge, the ship, the people, the shoreline, the trains, the birds -- all of the essence of the city -- and, a ranger who shall be nameless.

Can't wait to see it installed in the waiting room of the Richmond Police Department. Should be quite a ceremony with everyone in attendance, including the mayor. 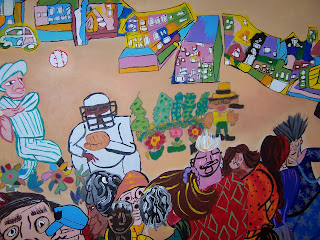 If you'll look carefully at the right side of the painting -- in right center, you'll see what is clearly a park ranger under a gigantic yellow hat. That's me -- just past that line of green trees. And all of the elements are there, hat, glasses, and, no, that's not a cigar growing out the left side of my head, it's my ponytail with nowhere to else to go but essential to my identify; clearly.

Oh to be immortalized in such a Picasso-esque fashion! Picasso, who took the essential elements of his subject and re-arranged them to his own liking and sense of art -- and the world said a resounding "yes!"

Dr. Elias Katz and his artist wife, Florence, believed that art was something buried deep in each of us; not dependent upon talent or education; simply lying dormant waiting to be released. Their aim was to open studios where people of any capacity or disability -- could find materials of every possible kind; clay, paint, needles and thread, rags, chalks, brushes, etc., and through which a staff of sensitive artists ... capable of resisting the temptation to "teach" but could help to open Aldous Huxley's "Doors of Perception" and bring into the world work of meaning and joy through people like my daughter, Dorian, and her community of "disabled" fellow artists. 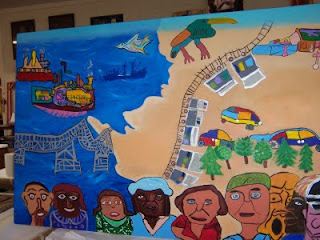 Dr. Katz developed three such studios, I believe; N.I.A.D. in Richmond, Creative Growth in Berkeley, and another in San Francisco (though I'm not sure about the last one).


Dr. Katz is now in his 90's and rarely turns up at the arts openings anymore; in addition, I believe he is now blind. Mrs. Katz died some years ago, but her work is being featured this month in a special exhibit at the Richmond NIAD studio. Their gift to a population of artists who are finding themselves appreciated and celebrated through colorful and delightful work that is satisfying and which adds to their incomes through a 50% split on all sales of their pieces is a resounding endorsement of their worth.

Thank you, Dr. Katz, for your firm belief in the capacity of all human beings to be capable of expressing their internal spiritual lives in all of its forms -- if encouraged to. Through those beliefs, you've enriched us all.

Photo: click to enlarge thumbnails to view details. For more information on NIAD, check out their website online.
Posted by Betty Reid Soskin at 10:16 AM No comments: 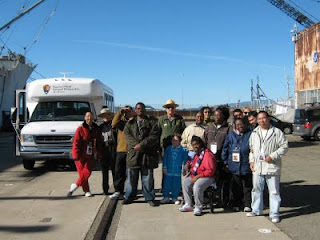 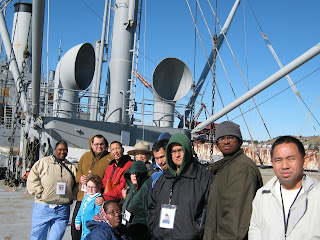 Photo: And that would be my daughter, Dorian, in red.
Posted by Betty Reid Soskin at 9:50 AM No comments: