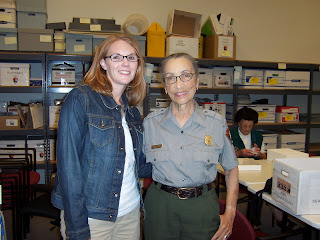 There was a visit on Friday from Ms. Jennifer Mykytuk (interesting name), the seventh grade teacher from Fruitvale Middle School in Bakersfield, California. She'd come to hand-deliver a DVD of a play that grew from last spring's experience of my first participation in long-distance learning. It was fascinating at the time, and I had no inkling of what might evolve from it.

Her class was studying the period of WWII and the Rosie the Riveter and home front stories that are again capturing the attention of the nation as the direct result of the development of this new national park. The kids had run across stories in the media about me and of my humble WWII experiences and that brought the invitation to participate with them in preparation for a statewide history contest.

I believe I wrote about it at the time. It involved the selection of four young girls to do the interview with me. They'd thoughtfully prepared and forwarded a copy of the questions they would ask. On the date of our interview I sat in one of our offices -- miles and miles away -- to speak with them undisturbed in a conference call that lasted for about an hour. At their end the interview was being audio-taped for the classes. I learned yesterday that in the weeks that followed they'd written a play based on that interview and it was recently presented as their entry in the annual State history competition. They placed a very respectable fourth place, according to their teacher.

The youngsters actually made a field trip to the Bay Area in February (while I was on a 2-week training at the Albright Institute at the Grand Canyon) in order to meet me and to visit the park and tour the SS Red Oak Victory. I was so sorry to have missed meeting them at the time. But yesterday I was honored by receiving the DVD of their performance. What a thrill it was to sit in the quiet and view their work and the path down which our fleeting encounter had taken us. I felt humbled by hearing some of my words and thoughts that worked their way into the consciousness of the young through the magic of technology -- to reappear now in this brand new art form.

What a remarkable time to be alive ... .

What an amazing experience in education.

And ... what a responsibility to continue to keep myself informed and focused on the important lessons of this history that I'm being exposed to as time continues to pile up mercilessly behind me and more and more voices of the era are stilled.

And, Oh what I wouldn't give for a Faustian bargain that would match the time that the bank gave me on my last home mortgage refinance! Another twenty years would just about do it, I think.
Posted by Betty Reid Soskin at 2:02 PM No comments: