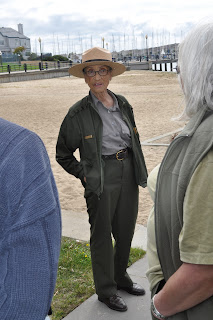 But two tours in one day?  Never again.
Posted by Betty Reid Soskin at 10:31 PM No comments:

I suppose it just a matter of coincidence, but I woke this morning wondering ...

Several years ago while blogging I thought that I'd created the phrase "extraordinary ordinary people" to describe those who -- during WWII -- dropped their hoes in the cotton fields of the South; left the soup lines of the depression; piled families into whatever conveyance they could find to drive through southern dust storms; hopped freight trains to ride toward an unknown future to build those ships and planes for their country in time of national peril.  It was my feeling that the times brought -- not so much those considered "leaders" -- but the "7 at home for each 1 on the battlefield" who had never been properly recognized -- and whose contribution is now honored by the creation of Rosie the Riveter WWII/Home Front National Historical Park that I'm now helping to shape along with many others of the National Park System.

Perhaps Ms. Rice is reading this journal, perhaps not.  If we chose the same phrase for different reasons -- it would not be surprising.  Words are interpreted in countless ways. and perhaps her family can be described by this language.  I'm really not sure since serving as Secretary of State and growing up -- even under the limiting conditions of a relatively privileged member of a southern black family -- would qualify her to describe herself under my definition.  But then I may trying to expropriate words that have many meanings.  Slipping them into the search bar of Google made that quite clear.

When I first chose them as an apt description for that heroic generation of ordinary working-class Americans, they were accompanied by trumpets only I could hear.  They were so right.  They've become laden with more and more meaning over time -- as they've become a part of my story-telling on the bus tours.  By now they've developed a patina that sparkles with originality of a kind that only those songs that I composed at an earlier time share.  For me, they are succinct and poetic, and I do love them.

But maybe Secretary Rice's experience in choosing the title of her new autobiography was similar.  I'd hate to think that it was her editor who gave her book its title after a cursory search for something befitting -- and that my phrase, "extraordinary ordinary people" was simply deemed coldly marketable.

I do wish Ms. Rice's reviews were more glowing, but they're tepid at best.  Maybe it would have been wiser to not have stopped the writing just prior to the Bush Florida re-election debacle.  But, as a woman whose trajectory followed the highest arc of power in American politics, I need to read more than the reviews.  I'll order the book tomorrow.


However Pulitzer prize-winning author Isabel Wilkerson's "The Warmth of Other Suns" is an absolute must-read.  It is a classic page-turner that I couldn't put down for the 3 days it took to read it (one of the reasons I wasn't blogging recently.)

Posted by Betty Reid Soskin at 11:29 AM No comments: