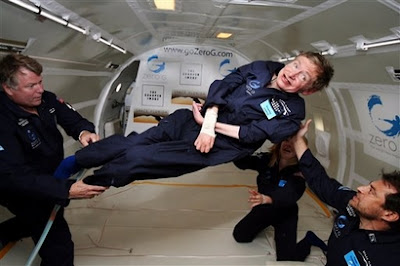 Through the magic of technology and one great interpreter of the Einstein theories ... .

When my little radio alarm went off this morning I found myself tuned to CSPAN and a speech being delivered by the president of the Aspen Institute, Walter Isaacson, about his newly-published, "Einstein; his Life and Universe." It only took a few sentences to become fully awake and deep into his talk as this great scientific genius slowly emerged as very human, impudent, fallible, and the most brilliant scientist in history. For the very first time I understood his theory of relativity and the theory of the constant state of light made sense. Because of Isaacson's ability to make Einstein penetrable, where I'd always in the past listened intently while hanging on to the words by my mental fingernails, this time I was following as if I knew the path -- and no longer as if sighted and trying to read Braile. What was meant by "...he thought in four dimensions" was something that was no longer obscured by my lack of education and limited access to the world of physics. His words, "imagination is a far greater force than intellect" echoed through the shell that holds my brain as in a great concert hall. Imagination I have an abundance of. Today I can even imagine that I know what Einstein was talking about.

Albert Einstein was only one of the great world presenters. Isaacson's genius in being able to finally bring understanding to those complex theories was very nearly as stunning. The metaphor of the bowling ball on the trampoline followed by billiard balls -- illustrating the bending of space opened doors of my mind and flooded the subject with light as never before in my lifetime. It may not stick, but at least this Sunday morning in this year 2007, I know what e=mc squared means. Tomorrow, and even later today I'll forget and I'll get back to mundane things like, "will we get the mess in Washington, D.C. cleaned up in time to save the world", but today I'm clear on the need to hold a long view (like global warming) and not sweat the small stuff.

Magically, through the (he)art of technology -- yesterday also brought those unforgettable images of Steven Hawking -- after four decades of being bound to a wheel chair trapped in a disease-ridden paralyzed body devoid of speech -- floating in zero gravity with wonder written clearly in every frozen muscle of his face ... there are no words ... only tears of joy for this brilliant scientist. Hawking, like Einstein, pushed us ever deeper into the exploration of the universe and gave us "Ordinarians" a lot more to chew on than most of our minds can fathom in a lifetime. Is it possible to look at this "man in space" and not want to scream at the pace of embryonic stem cell research and to not hate those who stand in its way?

Hope I'm still around when Walter Isaacson writes a book on Hawking and opens up the String Theory to us lesser minds. Meanwhile, I'm picking up his new book soon -- so that I can nail down these fragile wisps of understanding before they dissipate into the great Unknown never to return.

Meanwhile, I'll go back to trying to figure out just where I left my car keys ...

Which reminds me that the best reason for a woman over sixty not being allowed to give birth (no matter how possible that is for science to enable) is that she'd be constantly stressed out trying to remember where she left the poor baby!

Posted by Betty Reid Soskin at 9:53 AM No comments: