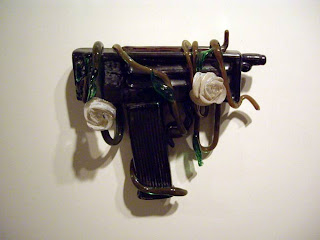 It has finally arrived -- that feeling of just being too old for something ... .

At the invitation of Lighthouse Community Charter School -- an interesting small school like many scattered throughout the city in the wake of the demise of public schools -- I arrived on Thursday morning to be their speaker. The class (perhaps 35-40 students?) were gathered together in a makeshift basement classroom tucked beneath a small office building in the heart of downtown Oakland. Beautiful faces on eager learners. That's what seems so special about these elective schools; there is that agreement made up front that this is the place where they want to be. There are no slackers here -- only the curious and the motivated combined with idealistic young educators; a winning combination.

These kids recently experienced a field trip to the Rosie the Riveter memorial in Richmond and were filled with questions about the time line embedded in the long walk (length of a Victory Ship) of the memorial. They'd read of Jim Crow-ism and racial practices that apparently needed clarification. Since I'd been the speaker at two national conferences hosted by the Lighthouse School over the past few years, their teacher placed a call to my desk a week or so ago to ask if I'd come to talk with their students who were ready to explore the WWII period and its social environment. Having had such a positive experience at Berkeley Arts Magnet only a few weeks ago, this was a no brainer; of course!

Why was this so different? I'm not really sure, but speaking with high school young people proved to be dramatically so. Either that, or, I was not prepared for what I found.

The distance between me and 9 year-olds was surmountable. It took only a few minutes to find the commonalities and to speak to them. Not sure where the match fell, but it was clearly there.

With adolescents, the difference was immense. There have been so many wars between the course of my life and theirs. WWII was the last declared war, and it was the last time we experienced war collectively -- as an entire nation; man, woman, and child. In the world these adolescents live in, governments go to war, not populations. Our nation's people are passive and only engaged incidentally. Some of them are warriors, more of them are victims, and few have any sense of the "why" of it. How does one speak of the present-day state of war? I found it impossible to do so. In that moment I could see no rational explanation for even the "justified" war of my generation. Standing before those young people, I was suddenly aware of how profoundly I simply didn't understand the inhumane concept of war. The words began to stick somewhere deep in my throat and thoughts were now a jumble of confusion. In some strange way I felt less mature -- less tested -- than they.

Yet, as I looked out on these young people (almost all youngsters of color and low income), it was impossible to not imagine that -- in a few short years -- they might well be the warriors of their time simply because their generation has run out of alternatives and the workplaces of the future has no need of them.

I wanted to cry... .My being there seemed almost incongruous. Were it possible to do so, the person sent to fill this engagement should have been someone whose age fell somewhere between their ages and that of their parents. I was simply too old. The years between were simply too numerous to span.

...so we talked about what Oakland was like when I was their age. They asked many questions, but few of them were about WWII or the Rosie Memorial or the birth of feminism brought on by women entering the work force for the first time in history. Such things were irrelevant to them and to their lives. How could these young people even imagine a time when women did not work outside their homes? Many of them come from single-parent homes headed by women.

The students were Latino, various Asian and South Pacific Islanders, a few African American students, a few white students, etc., with two white teachers. This is typical, of course, since we are still in a time when those coming out of the schools of education are still those who can afford to attend the universities in larger numbers. The effects of white privilege still prevail. It will be some years before that changes, I'm sure.

For all those reasons, I felt less than successful this time out. They wanted to know about the Black Panthers (whom I admitted supporting wholeheartedly in the Sixties) because they'd been studying them as a part of the Black Power Movement. I told them about having seen the Blackstone Rangers, a similar group out of Chicago. They wanted me to tell them how we handled drugs and violence ... and I had to admit my lack of experience with such evils in the Oakland in which I'd grown up at such a different period of the nation's history.

During the hour or so of my attempt at bridging the impossible gap, we made contact from time to time -- but I simply felt out of context. I did the best I could, but felt overwhelmed by the huge chasm between my life and theirs. I felt discouraged and -- most of all -- I felt old.

I ended the experience by reciting a poem, "Little Boy Black," I'd written at another time of confusion on a plane on the way home from that Black Caucus conference in Chicago in the Sixties. I attempted (with uncertainty) to connect with the poets in the room. Not sure I did, but it was the only bridge to them that I could find. I closed my eyes and tried to remember all of the stanzas. Not sure I did, but just maybe... .

It was a hard hour, but one in which I found warmth and a willingness to hear my words -- even when they were only slightly relevant to their perilous times.