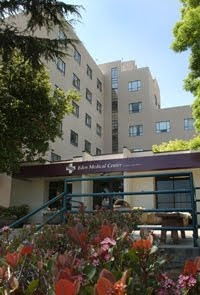 Life certainly has its way of keeping one humble ... .

Just in case I may have forgotten about whatever those governing forces might be, this week was a reminder of the tallest order.

After a particularly busy week which included the Thanksgiving family obligations, on Friday morning I climbed into my little red car and headed north to Mendocino for another serene weekend at the ocean's edge. All weekend, however, I felt depressed and foreboding, as though I'd never actually reached my destination; that I was left suspended in space somewhere along the way. It was strange. I was subject to long periods of silence; felt reluctant to leave the house for any reason; even resisting a walk with Tom down to the seal rocks. I read for long hours (Martha had given me a copy of Bliss Broyard's "One Drop" which turned out to be almost a word-by-word accounting of my own Creole family's history.

It was strange to be reading about names and places of those I'd known from childhood. There was her uncle by marriage, Franklin Williams, a noted activist Civil Rights attorney here in the Bay Area; mention of the Broyard family home in New Orleans on Lapyrouse Street in the Tremé -- the first home that I can remember where my paternal grandparents lived and where my own parents returned to from Detroit when I was about 3 years-old. The names and places could have been drawn from my own. Her story turned out to be a real page-turner for me.

I'd tried to place a call to Dorian several times each evening while there to reassure myself that she was okay (but hasn't she always been?) but failed to connect. Her cellphone (I thought) was on the charger and she'd neglected to turn it back on, or something equally as easily explained. I'd been out of cellphone range since Friday morning and planned to try to reach her again just as soon as there was evidence of a signal. She knew that I was out of reach, but knew also to call her brother, David, should anything turn up that she couldn't handle. This was not a new circumstance, but one we'd experienced many times over many years.

On Monday morning at about 7 o'clock I rose; did my toast and marmalade with tea and took to the road. Upon reaching Fort Bragg there was suddenly an insistent beeping from my cell. I pulled to the side of the road and searched frantically for my phone -- pressed the button and heard a male voice with the dreaded words, "...if you are related to Dorian Reid, would you please call Eden Medical Center in Castro Valley immediately!" He then gave his name, "Zack," with the date (last Friday) and said that he would be going off duty within the hour. It was now Monday morning.

I knew not whether she was dead or alive, nor would I know for another 4 hours.

After the nightmare swerving drive out of the mountains to reach Highway 101 -- I pulled over again to the roadside and called the hospital, identifying myself ... someone on the other end of the line sounding impatient (hurried?) -- told me that she was not free to give me any information until I reached the hospital. The reason being that while I was claiming to be Dorrie's mother, I could be anyone -- and the hospital could not give out her status without my being there before them with proper identification. That meant driving from Mendocino to Castro Valley California (almost 4 hours) in a state of shock and disbelief -- not to mention the guilt of having gone so far away -- leaving her at the mercy of "the World!" Never mind that she lives independently in a group home with a layer of case managers, social workers, counselors, between us in the vain attempt at creating the illusion of independence we've striven so hard to achieve all of her life. This was pay off time.

I did reach the hospital to learn that while she'd been visiting friends in Hayward on Friday (adjacent to Castro Valley) and, while there, decided to walk to the mall to begin her Christmas shopping. She'd received a small check for some of her art work a day or so earlier. In the process she was involved in an auto/pedestrian accident which resulted in two badly broken lower legs, bruised ribs, a fractured nose, a bad bump on the forehead which was an indication of a small brain bleed (since absorbed), and a black eye.

When I saw her for the first time she was overcome with guilt (having been cautioned frequently by her mom to never be on the street at night alone) and could hardly be consoled. We were a mess! We were both suffering from remorse, each at the thought of having failed the other. And isn't that always the way?

She'd been immediately brought into surgery and by the time I 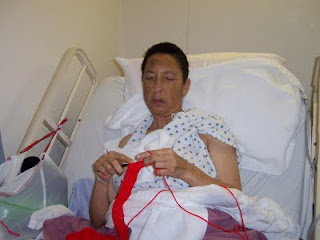 reached her the worst of it was over. Her mental deficits protect her from much of the trauma since she is at least spared the concerns about prognosis (will I walk again, and how impaired will I be?), but lives pretty much in the moment. Not so for her mother, however, and that's something I've been wrestling vainly with hour-by-hour since.

A few days ago she was transferred to a rehab facility which is nearby here in Richmond. She is relatively close to NIAD (National Institute for Artists and Disabilities) where her days are normally spent in a world she knows and is supported by. The drive to-and-fro through heavy traffic to the hospital each day is now over. When her physiotherapy has progressed enough to warrant it, she will be picked up by ParaTransit and delivered to and from her program where her life as an artist among the NIAD teachers and community that she loves will go on. She is also now physically close enough so that visiting is convenient for me. She is a mere 10 minutes away from the Civic Center where our offices are located, so that I can stop by to and from work each day for short visits.

I've been told that she will spend the next 8 weeks in the nursing home in a wheelchair, and that after that time she will begin weight-bearing therapy that should slowly bring her back to her normal activities. Meanwhile, what to do with Christmas when my apartment is on the second floor with no elevator?

It looks like Santa will have to visit Vintage Estates Nursing Home this year, but that's a whole lot better than it might have been, right?

The hardest part may be that I'll need to begin to teach myself all over again how to allow her out there to function in a world not designed to support her. The tendency is to draw her close and over-protect. My new mantra is, "... this could have happened to anyone". I must resist the temptation to undo years of building the separation that has enabled her to live with as much independence as she has achieved -- and quite successfully. I must not die and leave her in the world unprepared for making her own way. The State's ever-increasing budget cuts have decimated the safety net originally created to support her life outside any institution. Governor Ronald Reagan deconstructed California's mental health care system and sent this population back to communities without that system creating the services that would make life on the outside viable. We're still living in the aftermath of those decisions. Our streets are filled with the developmentally-challenged, returning wounded veterans of our many recent wars, the mentally-ill, and the psychotic -- living under bridges and overpasses in enclaves of homelessness. I shudder to think of that possibility for Dorian's future.

The hard part is knowing in my heart that the risks are very real, but that it is necessary for me to let her face them, even while knowing that she may not make it. This is the part that there's no way to prepare for ... .

There are times when love hurts ... .
Posted by Betty Reid Soskin at 11:11 AM No comments: