I've not written yet about the Boilermaker's Banquet ... haven't known just how much to share ...

but today someone from the Union forwarded photos taken at the time, and I was reminded ...
besides, there were a thousand witnesses in that ballroom so what's there to withhold?

I'd been invited to attend at the request of Mr. Newton B. Jones, International President of the Union.  I was not asked to represent the National Park Service, but was told by my supervisor that Mr. Jones was traveling from headquarters in Kansas City to San Francisco for this occasion, and that he had especially requested my presence.

And, of course, the organization sent a limo to Richmond to transport me to the Union Square Hilton Hotel that evening.  It was Cinderella time, and, having spent the morning hours being filmed by their team -- there was a surreal character to the entire weekend.

But on arrival in a rainstorm at the hotel, and being greeted by Union officials with whom David and I would spend the evening among a ballroom filled with 1000 union members celebrating their National Labor Awards.   Mr. Jones was receiving the International Labor Leadership Award; the reason for his being in San Francisco that evening.

There were other honorees, each giving a speech of acceptance.  Mr. Jones was the last to speak, being the "star" among stars.

David and I were seated at #1 Table, just below the dais and within a stone's throw of the speakers.

Mr. Jones spoke for about ten minutes -- a speech with lots of inside references with lots of names of those unknown in my world, but noted in theirs.  Suddenly, as he was coming to the part where he was introducing me to the house -- and I stood to receive their applause -- he lost control.

He provided  to the gathering background that could only have been known if he'd been reading my blog or paying very close attention to articles and/or interviews I've done over years.  But as he referred to his regret that I'd worked for the Union at a time before it was racially integrated he was overcome by emotion and the tears came, and -- before 1000 Unionists he simply couldn't go on.  The room was absolutely silent.  You could hear the proverbial pin drop as he struggled to gain control. 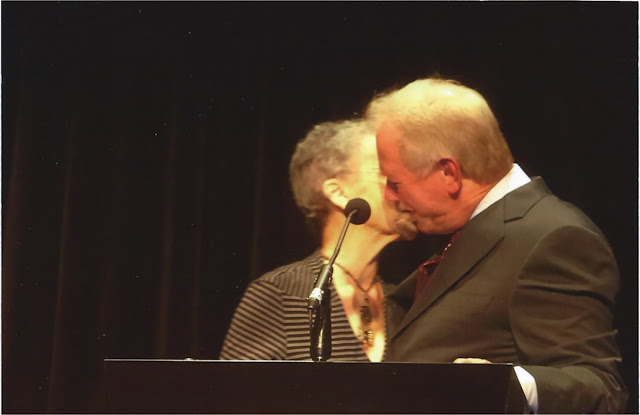 As he struggled to regain his composure and without warning I was suddenly being asked to join him on the platform; this was not planned, but the room faded away and there was only this dear man who had just apologized for the entire International Boilermakers Union and there was nothing to do but grant forgiveness after more than 70 years of struggle.  So that was what I did and without hesitation.

In a strange way it didn't feel personal at all, but purely symbolic.  It was as if this was a conversation the Union was having with itself, and that I was only incidental to the outcome.  But that it was a role that someone (me?) needed to play in order to exorcise the demons of bigotry, finally, so that they might be able to own that awful history and forgive themselves.  But ultimately it is the Union of today that holds the power to forgive the Union of 1944, because, of course, this is the only way to find the peace we're seeking in these troubled times.

It was all over in a few minutes after decades of angst and guilt.  Mr. Jones wrapped me in his arms and planted a kiss firmly on my cheek as the room filled with 1000 dinner guests melted away for us both.

I'm beginning to find myself increasingly performing the role of "celebrity," which was probably predictable -- given the continuing public exposure ... .


Last night I served as honorary co-chair at the 40th anniversary Gala of the LifeLong Medical Care program held in The Rotunda -- a most beautiful building in Oakland's Frank Ogawa Plaza.  What a spectacular evening it was; one which started out by being picked up (again)  at my condo by a chauffer-driven Lexux town car and delivered right to the steps and into the able hands of a board member who would escort me to the guest registry counter then down the marble staircase into a transformed lobby now furnished with decorated dining tables and 300 hundred well-dressed celebrants.

The gathering was made up of political figures from my past; some with whom I'd shared causes -- and some with friendships.  The room felt warm and welcoming; either that, or, I'm beginning to enure to my growing celebrity status and find it less undeserved over recent weeks.  (Maybe this is when Betty the Persona goes off the rails!)

At a moment in the proceedings I delivered my hastily-written one-page triple-spaced little speech which received a standing ovation (and I'm still not quite understanding how that continues to happen), something I've given much thought to over the weekend in quiet moments ... .

I spoke of being a child and adolescent during the Great Depression, and that meant that the only medical attention I'd ever received was subsidized by the County.   I was a frail child thought to be at risk for tuberculosis so was sent to Del Valle in Livermore, California where I spent almost a year -- at no cost to my struggling family.

That was because I was a child of the service worker's generation with our fathers and uncles employed as Pullman porters, waiters, janitors, bell hops, elevator operators, cooks, etc., and our mother's were 50 cents an hour domestic servants.  At a time when it took $47.25/wk to support families -- if you were white, our fathers and uncles earned $25-$35/wk (Pullman porters earned $18/wk plus tips) so there simply was no money to pay for routine health care.

One might well wonder -- if the costs of such basic health services could be absorbed by society when the nation was so stressed economically -- why, in a far rosier era, is that not possible today?  This was in the Thirties when bread lines were a common sight, and childhood diseases more prevalent and less controllable.

Though I made my way out of the need for such assistance programs long ago, there are many children of color still trapped at that economic level; children who are still in crying need for such services.


People forget that those of my age were children and adolescents during the Great Depression.  The only health care we ever knew was subsidized by the Alameda County Department of Public Health.  Free clinics were the only clinics I'd ever experienced until the grownup and married Betty became a member of the Kaiser Permanente Health Plan much later in life.   I suppose I was the recipient of "Universal Health Care" before the concept was born since everyone in my universe was served by that system so there was no stigma to have to bear.  I was a child of the service worker's generation at a time when the nation's economy was in a shambles.


Because I was a frail child, considered at risk for tuberculosis, I spent a year in what was then called a preventorium (a word my spellchecker doesn't recognize), Del Valle Sanitarium in Livermore, California.  That health-giving facility is no longer in existence.  There was no cost to my family, ever.


It would be the first time I was away from home, spending that year with parents unable to bear the cost of visits more than a few times over that period.  I was about 11 years-old.  It was during those long months that much of the autonomy and independence I enjoy now as an elder were born.  It was a brush with loneliness of a kind rarely experiences by children, I think.  It was a time to develop inner resources for the sake of mere survival.


I doubt if there is anyone around with a greater sense of the meaning of collective health care being assumed by one's community when life's problems grow beyond even loving parent's ability to provide for or cope with.  I was surrounded by caring adults who helped me to grow through early adolescence without too much scarring.  It was during that time that I learned that even strangers in stiffly-starched uniforms and pointed white caps could care deeply about kids, and that both givers and receivers could benefit by such programs.


I'm honored to be involved in giving recognition to such critically important work, and value the chance to re-visit a long-forgotten past.  I'm so far beyond the reach of that lonely child that it almost feels as if she never really existed... .


Thanks to Lifelong Health Care for providing the opportunity for me to express long overdue gratitude to those caregivers of my childhood who are no longer with us, and to offer whatever assistance in my power to those continuing this important and life-giving work to those in need of such services today and in the future.

Posted by Betty Reid Soskin at 5:08 PM No comments: