Did I fail to mention how deeply disappointed I was in the Reverend Jeremiah Wright's most recent anti-Semitic statements? I should have. Little of that overt arrogance was present in his person or his talk at the recent gathering at Starr King School for the Ministry.

How sad that his anger hasn't yet eased and that it would now be expressed in ways that cause embarrassment to those who are trying hard to support him at a time when attacks upon his character have been so damaging -- so painful -- and in many instances -- so undeserved.

So sad ... and so alienating.
Posted by Betty Reid Soskin at 4:53 PM No comments: 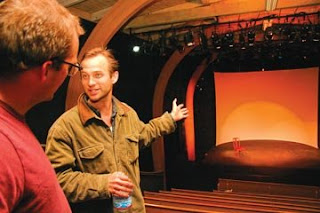 I'm not sure what if anything compares to the feelings associated with being able to share in the creative process of others ... .

Whether it's the yard sale fundraiser held yesterday at NIAD (National Institute for Artists and Disabilities) where I was assigned to the check out table for a couple of hours while Dorian folded for sale shirts and sweaters on the tarp spread out on the asphalt, or later at the Berkeley Repertory rehearsal studios on Center Street in Berkeley for two exciting hours of theater-in-the-making in the afternoon -- it was a Saturday well-spent.

Many months ago I'd been visited by Patrick Dooley, Artistic Director of The Shotgun Players; Playwright Marcus Gardley, graduate of the Yale School of Drama an 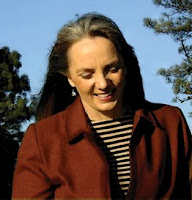 d recipient of the prestigious Eugene O'Neill scholarship; Director Aaron Davidman, and Musical Director Molly Holm, jazz singer and collaborator with Bobby McFerrin, creator of Voicestra. The company was at the beginning of the process of creating a theater piece based on Rosie the Riveter of WWII fame. This was the conceptual stage and the Richmond-born author (now teaching at Columbia University) was seeking information and inspiration in order to begin the work of bringing this brand new work to life.

Over several visits to tour the scattered sites of the park, the group met and interviewed surviving Rosies and hosted a lovely luncheon at Saluté restaurant on the shoreline. They were able to gather up research materials (including some of my own writings from short essays written over time); and begin their work. Marcus returned to the east coast for another year of teaching, and recently returned at the end of the school year to cast and stage their production to be premiered locally in September as a part of the upcoming Home Front Festival season.

Upon return from Mendocino, I'd found an invitation to attend their first complete read-through being held yesterday afternoon. It runs two full hours with one intermission. This was the time to meet the cast of 9 talented young women, and to get a sense of the story and original musical score that was now ready for final editing. What an afternoon!

The WWII story, "This World in a Woman's Hands," was complete -- in all of its complexity around the issues of roles, race, and gender. The sense of the times was well-captured and the history accurately documented. I'm not at all sure what I expected, but by the time the 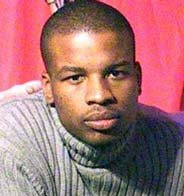 final lines were spoken I was more deeply-touched than I could ever have imagined. Aspects of the several story-lines were a surprise to me -- moving into life stories of those historic young home front workers that I'd never really considered. The play opened new doors of understanding that I'm not sure I was even aware had been sealed over all those years.

There were a few unclear transitions in time and place that will surely be smoothed out when all of the magic of "theater" is applied; lighting, costumes, sets, etc., (which I'm guessing will be minimal -- abstract). The dialogue is rich and colorful and revealing of the times and the casting is superb, consisting of 5 women of color - one Latina and four African American; and four white young women -- all of exceptional talent.

... and ... best of all ... I felt myself an active element in their creative process; as an essential living bridge between the generations, helping to bring life to an era of critical importance to history. Sound pompous? You betcha! Pomposity goes right along with my recent stated intention of speaking only in declarative sentences in these final years. These days I'm thoroughly enjoying the feeling of my own weight in my shoes; finally.

Fortunately, I'd thought to invite my 11 year-old granddaughter, Tamaya, to come along, and, as the only child in the room -- her presence provided a symbol of future woman adding to the power of the moment. She also served to anchor me to reality so that her grandma didn't blissfully levitate up into the ceiling from the sheer wonder of it all!

The play will probably undergo minor continuing editing changes over the coming weeks, but I can hardly wait to experience the final production. (I need to clarify whether Marcus is aware that the explosion at Port Chicago occurred at 10:30 at night and not in the morning -- or did I misunderstand something? Also, I'm unclear about what happened to Gloria Cutting's husband, eventually... or was that deliberately left unresolved?)

Time out after a particularly intensive few weeks ...

Escaped for a few days to visit my friend, Tom, and the magnificent wild rhododendron (some as tall as 20 ft.) deep in the redwood forests -- and the colorful wildflower displays on the Mendocino Headlands. It was glorious; a balm to the spirits!

No brilliant sunsets this time, and an ocean that appeared to be at peace. There was no sign of the dramatic crashing breakers or even wind-driven whitecaps to provide the sense of movement and cadence that I find myself almost instantly in harmony with. Fog and mist reminiscent of the northern coast now less frequent than before; nothing like the environment that I remember from years ago. Missing are the winds that shaped the gnarled cypresses growing near the ocean's edge -- as if stretching from their roots vainly trying to reach inland. Climate change? Surely another sign to be ignored at our peril. Over recent years the fog has visited less often and the winds seem more gentle. The oldtimers in the area decry the end of both the lumbering and fishing industries and, of late, fear the predicted disappearance of tourism -- given the economic forecasts for the State. The certain closure of state parks in response to budget cuts hangs like a pall over this picturesque village of artists and lovers.

Found myself wondering if these environmental changes are as dramatic as they seem, or, if it is simply no longer possible to ignore them since we've developed the technological capacity to notice, measure, predict, and attempt to effect the slightest variations in nature's patterns through research, practices, and changing human behaviors.

One hundred years ago we would hardly be aware of earth tremors that occur in the Far East or in Antarctica. Now our Richter spits out a report within minutes (seconds?) of the event.

Finding myself outside the range of the sound of urban gunfire and sirens in the night -- my mind probes far different questions and dilemmas -- but does it rest, ever? I'm not sure.

I know that sleep is harder to come by in these later years and that may be due to the millions of questions and quandaries collected -- unanswered -- over a lifetime. Most nights I fall into deep sleep for a few hours after playing out my day against inner eyelids for what seems endless hours. Dropping into sleep comes without warning; going from a highly alert state to the void of nothingness until consciousness returns with a suddenness somewhere around three a.m. It's then that I take on the monumental task of solving the world's problems (the big stuff like world peace and how on earth does one deal with wrinkles and sagging jaw lines, etc.) and connect with my greater self which includes others; the all-inclusive "We." Its hard to explain -- but I do sense a oneness with all that I can't seem to access at other times; except when I find myself in an empty church or temple of any denomination ... .

...only in Mendocino does life in the foreground give way to a panoramic view of what lies before me -- in this place where I can hear the sound of the ocean, feel its rhythms, taste the salt in the air ... and experience the fragile beauty of the Headlands wildflowers ... .