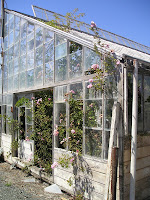 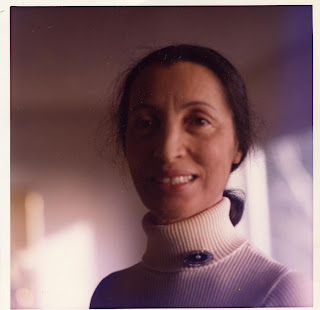 Aside from the fact that I've now lived so long that everybody I meet looks vaguely familiar, what else is new?

Little Rock Central High/Richmond High plan is moving smoothly ahead, with meetings with the school superintendent now behind us and renewal of contact with the folks in Little Rock, Arkansas, back in place. Time is beginning to feel tight with the weeks rolling by all too quickly ... with breakfast now every six hours and Christmas every six weeks. My sense of urgency is even more pronounced and I imagine that wisps of smoke pour from my ears while rushing from meeting to meeting and that I singe the furniture as I brush past!

I catch sight of myself in some plate glass window as I zip from place to place barely recognizing the woman who glances back breathlessly. Denial, maybe? My sense of self no longer comes from that reflected image, but in some strange way -- now comes from someplace else. I don't seem to be any longer tethered to an exterior "me." That greying wrinkled-faced soul with the thinning hair that I see is jarring -- since the self-image that I carry in my mind's eye -- the woman who bounces in and out of my little red BMW hatchback to feed the parking meter -- the one who still bounds up the stairs to my apartment without a pause -- that woman -- is capable of anything. That woman is a loved and respected grandmother; supervises the life of a handicapped daughter; is involved in a loving friendship with a dear man; is creating a cross-country program for young people; is doing a credible job of helping to shape the development of a new national park; and in so doing is modeling the best practices of civic engagement, a concept she'd never even heard of before coming to this last position, but that she probably helped to create. What a world. I can't account for the disconnect, but it all fits into each frantic day quite neatly still.

This week we're engaged in the attempt to save the last of California's handbuilt greenhouses that form a tiny long-abandoned Japanese-American village within the city. The cut flower industry died with NAFTA and the importing from Mexico and South and Central America was begun. The Oishi and Sakai families settled here early in the last century and, along with other Japanese-American families, operated one of the largest cut flower industries in the State.

Situated immediately adjacent to Interstate 80, there are some 41 greenhouses, a watertower, several homes built early in the last century, and the first Japanese language school. At one time this major freeway sliced right through these huge nurseries. The historic complex is scheduled to be demolished soon and replaced by a large development of low to moderate single-family homes, some condos, and duplexes. This may be the last opportunity to save at least a part of that site and its structures that are so critical to the telling of the stories of the historic Japanese American community -- those generations of stoic and patriotic Americans who suffered separation into internment camps during the World War II hysteria about "enemy aliens." Fortunately, the developers appear to be listening -- maybe... .

Helping to raise public awareness of the existence of such sites in the interest of historic preservation is vitally important -- and the feeling of ever-running ahead of the wrecking ball probably has something to do with this all-consuming sense of urgency.

Maybe I'm a little like those greenhouses ... maybe we all are.

I'm certainly aware of my mortality and of the speed with which I'm approaching the end of existence. I'm aware that there are few traces left of the really beautiful young woman I once was -- but I'm extremely grateful for having experienced life as such for far longer than most. I've now used up most of the "pretty," and what's left is pure character, I suppose. But between you and me, pretty was a hell of a lot more satisfying ... if somewhat less productive. I'm certain (in my more insightful moments) that pretty opened a lot of doors that character eventually learned to walk through.

Or so it seems.

Photo: Photographed at home on my wedding day. I was well over 50 at that time. The Sakai greenhouse is an interesting metaphor for the aging process, don't you think? The decay and neglect haven't a chance against those irrepressible roses bursting through the walls and window! I feel a little like that much of the time. This thumbnail really must be seen full size. Click on it then scroll down for full appreciation. It is simply beautiful -- and seeing it gives me such hope.