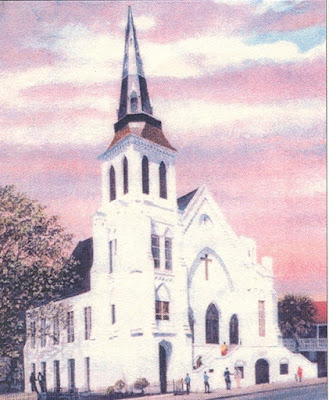 In thinking back to those compassionate forgiving members of the congregation of Emmanuel A.M.E.... .


In the wake of today's breaking news -- another horrendous shooting -- this time four marines, and the shooter with some others suffering gunshot injuries; again.

I'm thinking of the unbelievably generous forgiving of the heartless murderer whose horrific act a month ago left us all in awe.   I'm struck by something that may be obvious only to me.

I'm sure that everyone in the nation was grateful to them for setting the tone that would quell any thought of a violent reaction.   We must not ever forget that the assassin's goal was to start a race war by his actions.

Those loving Christians did not ask the death penalty.  Instead they offered him their forgiveness.

Fractious Southerners, black and white, spoke of it passionately throughout the South in the days that followed -- and in their legislature during the debate around the removal of the Battle Flag of the Confederacy.

Does it not follow that this provides the answer for the divisive questions around the debate over the  possible elimination of the death penalty?  I believe the Supreme Court will tackle that question in the upcoming term.  Our national response to heinous acts of murder is to come at it from the position of an eye for an eye; at least until now.

I'm certain that were I to have to face one who took the life of one of my loved ones,  in the heat of passion I, too, might want revenge -- and aren't we lucky that I don't have the responsibility of making that decision.   Not any of us should, personally, have that responsibility.

But how about our ability to respond as a nation to such crimes in the same humility and compassion as those loving churchgoers? Would not imprisonment for life without the possibility of ever being released be adequate? When will we learn that we only diminish ourselves and our humanity when we continue to kill people to teach that it's wrong to kill people?

I've always had the nagging feeling that, Timothy McVeigh, the Oklahoma bomber, was granted a state-sanctioned suicide, and went to his execution still defiant, steely-eyed, and without remorse.

I suppose it makes as much sense as fighting wars to defend democracy with a segregated armed forces.
Posted by Betty Reid Soskin at 4:37 PM No comments:

Learned, sadly, that one of the patriarchal figures of our Charbonnet family passed away yesterday ...

Our fathers were two of the seven brothers of the family.  In addition, there were three sisters.


Armand was one of the funeral co-directors of the historic Charbonnet-Labat Funeral Home in New Orleans.  His brother,  former state senator Louis Charbonnet, and he had partnered for decades in this family enterprise that came into being in the year 1893, as I've been told, having inherited the institution from their parents, Louis and Myrtle, who -- in turn -- inherited it from theirs.  This was the birthplace of the legendary jazz funerals and the memorable "Second Line" processions that are as much a part of the New Orleans story as is Mardi Gras.   The Charbonnet family also owns and operates the picturesque horse & buggy concession that is so much a part of the French Quarter tourist's experience.

Also, in the wake of that sad news, another bit of history turned up that needs addressing, but I'm not certain just what to do with it yet ... . 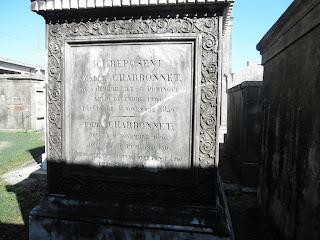 In December of 2012 I visited the grave of Amable Charbonnet, the ancestor-in-common with (white) cousin, Paul Charbonnet, and recall how he and his wife, Shirley, and I doggedly searched -- row-by-row -- for hours through St. Louis Cemetery #1 hoping to discover his grave.  Paul had researched prior to my arrival to prepare for this by turning up a picture to help identify the grave.  In it the site had a protective ornamental iron fence around it, which (when we found it) had turned to dust with the centuries, which made it difficult to locate.

Amable's grave is shared with his young daughter, Emma, (another of our ancestors) who died in childhood at the age of seven.

The beautiful white marble tomb(?) carried the signature of the Parisian artist who had created it, and was a true work of art.  The years had not been kind, and occasional catastrophic flood waters had contributed to the gradual deterioration.  The grave stands just a stone's throw away from that of the legendary Voodoo Queen Marie Leveau.

Paul and I talked briefly about the need somehow to raise the subject with other family members, but the project disappeared into the past and I'd not given it any thought since that great adventure.  (See December 16th, 17th, 2012 in the archives.)

Armand's death brings the subject to the forefront again, as I sent word of his passing to Paul in Baton Rouge.  His response came this morning and included word that he'd continued his research on Amable's place in our shared family history -- that Amable is the earliest ancestor of  our branch of the family, and that -- if that grave is to be restored and cared for -- today's family members might want to share in that responsibility.  Something to think about, cousins.  For those of us who may be able to afford it, of course.  It's probably just a pittance if shared widely enough.   There are surely enough of us -- though scattered widely -- to make it well within the realm of possibility.   Maybe we can ask Louis for some guidance since this would fall in his area of expertise.

When the dust has settled on this most recent loss, I'll contact Armand's daughters and try to figure out just how we might handle the care of this important family landmark -- this mark of our (still traceable) beginnings -- for future generations.

I'm reminded by these recent posts just how deeply embedded are all of our lives in southern history despite a long life of living in the Far West ... .  Small wonder that I'm almost traumatized by events rising from those roots.  It's as if my DNA is disturbed and writhing from generations of assaulting memories, as if it's all been accumulated over many generations, yet lies in some shallow place to be re-awakened by each succeeding unprocessed "insult" to the psyche by continuing unrelenting and unresolved pain.

Could this be true for the entire nation?  Is this what I'm living in microcosm?

Do we not need to bring Truth to that history as a people in order to wrest some kind of relief from the unending misery?  Should we not re-visit those painful places in order to own that history -- so that we can forgive ourselves ... to enable us to move into a more compassionate future ...