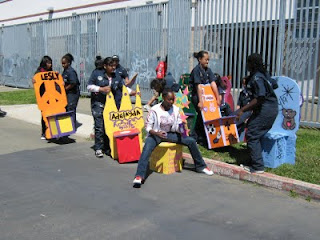 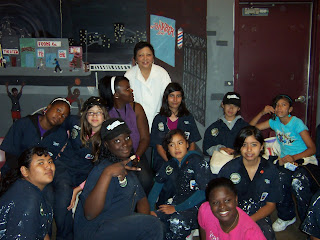 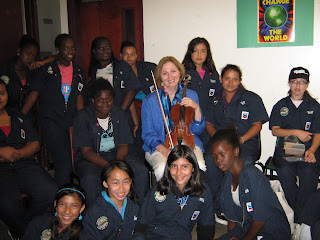 Posted by Betty Reid Soskin at 10:17 AM No comments: 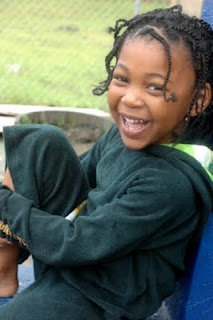 ...and it is not because I've won the lottery (refuse to play on principle, actually), or, that I woke up this morning wrinkle-free and with hair follicles reactivated. Nah. It has simply been one of those stretches of time when even the smallest wishes have been granted, even those unspoken and deeply buried in my psyche.

Various segments of my past were reunited, starting with Paul and Shirley, but from my more recent past -- times from years of working with the community in other capacities. My world has always been nicely peopled, a fact that has enriched life considerably and added to the self confidence I now seem to have achieved.

Case in point: A brand new program, "Rosie's Girls" (a local version of a national program) was introduced into our daily park lives this summer that is so exciting and that called upon the wealth of years of contacts with some of the most exciting women one might wish for. The assignment meant going through my contacts list to gather together an impressive group of women with whom I'd shared segments of my own life over the years. 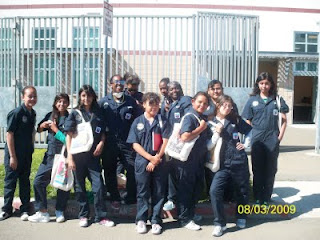 oducing them to non-traditional work place roles in the tradition of "Rosie the Riveter". We (the park) would partner with the school district, the city's Dept. of Public Works, a local bank, private industries, public safety agencies, the YMCA, etc., which would sponsor exciting experiences in order to expand the choices of youngsters whose own life choices might be seriously limited by a number of challenges. During camp they would be given hands-on experiences with a variety of skills (simple electrical and plumbing repairs, carpentry, cement work, fire safety, landscaping, wall-climbing, an overnight on a submarine after dinner at Fisherman's Wharf in San Francisco, visits to the Marine Headlands, to a fabrication studio where they would create concrete stepping stones for a victory garden planted by kids in another summer program. And all this would be experienced in jumpsuits with Rosie's Girls emblazoned on the backs and over a breast pocket, with matching baseball caps, work gloves, safety glasses; all items will be theirs to keep when the program ends. (How cool is that?)

My assignment was a relatively limited one. My outreach co-ranger, Carla, was acting as lead. I was to come up with a "Shero" (term coined by Maya Angelou for female heroes) to give a lunchtime presentation for each day; successful women from every walk of life who would share lunch and do 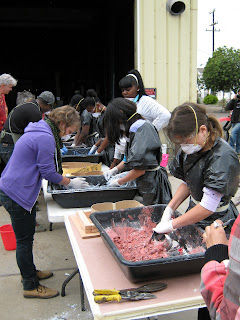 a Q&A with these 12-14 year-olds. They were to bring along photos of themselves (maybe at their geekiest) at about those ages -- talk about what inspired them at that time and how those ambitions shifted over the years; if indeed they did change. They were asked to say something about the challenges they'd faced and how their current life measures up to those early dreams. The Sheroes were sensational!

They included the mayor of the city and two former mayors; a vice-president of an international corporation; a member of the California State Assembly; a violist from the San Francisco symphony and opera companies who also plays for soundtracks for video games and films at George Lucas's Skywalker Ranch; a popular R&B singer; the woman who heads the education committee of the Tellurite Film Festival in Colorado; a playwright with two productions currently on stage; two national park superintendents; two authors, a poet, and a publisher; a juvenile justice specialist, several feminist leaders, etc. It was an amazing collection of inspiring role models. I've already begun my list for next year's program, and we have plans to bring the original group together for an evaluation luncheon very soon. One note I do need to add is that there was not one refusal among the busily engaged women invited to participate. Some came from quite a distance away to share of themselves, and they did so with caring and enthusiasm. Something that I'm sure was contagious and filled the room to over-flowing each day.

I can hardly imagine the kind of impact such an exposure to strong and accomplished women will have on youngsters (and these were mostly children of color) in these formative years. I will provide links to the Rosie's Girls website as soon as I can figure out the process. Meanwhile, I'm anxious to share the good news.

Spent most of yesterday afternoon drafting a brief essay for an online website involved in African American tourism for the Convention and Visitor's Bureau of the City of Richmond. Since I was writing while riding high on the Rosie's Girls experience and Friday's installation of the beautiful stepping stones at Verde elementary school's victory garden -- the article wrote itself with minimal help from me.
Posted by Betty Reid Soskin at 8:58 AM No comments: