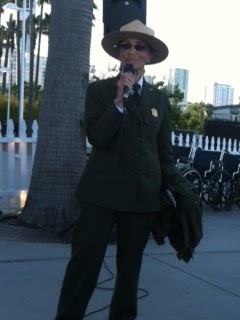 Blogging less these days ... not that there's nothing to write about ...

To the contrary -- there's a "muchness" about these days that defies everything I ever dreamed were within the realm of possibility.  Imagine this -- at my age ... .

That shadowed figure to our left is moi addressing a pre-game reception for professional women, female entrepreneurs, all devoted major league baseball fans at AT&T ballpark in San Francisco! 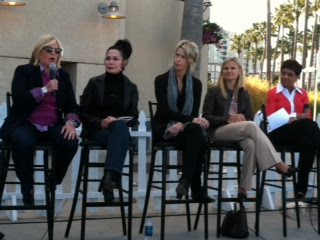 Prior to this moment five women executives had given their bios -- all exciting and inspiring and awesome.  Wish I could recall their names, it suffices to say that one was Janice Mirikitani of Glide Memorial; another an executive with LinkedIN; another from Silicon Valley, a banker; and the only woman in all of baseball who is the field announcer -- and for the Giants.  Fast company, indeed.

They were impressive, and so young ... .

I opened with, " I feel like Alice down the rabbit hole!"  And it was an accurate description of the moment, I assure you.  Gave a brief bio of my own and got a standing ovation!  What an amazing moment in time and space.  For just an instant time stood still ... .

We (3 National Park Service rangers and 5 veteran Rosie's from the home front era) were presented down on the field before the fans for the opening ceremony of the series between the Los Angeles Dodgers and the S. F. Giants. 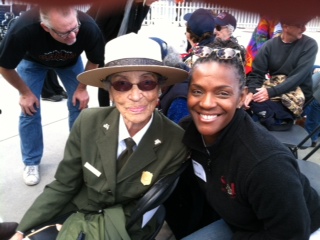 Wished they'd given me a chance to toss out the first ball or to run around the bases and slide to home base, but I suppose that would have been a bit much.  I'm guessing that this was only because I was in the wrong uniform, right?

Posted by Betty Reid Soskin at 9:22 PM No comments: