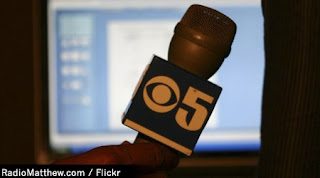 Adventures in the Media ... or, Betty in Television Land ...

The call had come shortly after our return home from the east -- one of several requesting appearances for a variety of Black History Month programs. Nothing unusual. It has been so for the past few years and I've begun to look forward to them now that I've lived long enough to be black history.

One of the early calls came for an on-camera interview to be done at the Pacific Medical Center in San Francisco where I would participate in a video on lifelong learning for the Centennial Commission of the National Park Service. My segment will be combined with others in preparation for a national conference to be held at Gettysburg in August. I was asked to be in uniform and would be filmed for about an hour for what will end up as a brief part of the final presentation. Easy. I've gradually become more comfortable with this aspect of my work.

Because these interviews were all related to either my recent visit to Washington or to Black History Month, I was not prepared for the call from KPIX - Channel Five, in San Francisco. I'd agreed -- expecting more of the same -- only to find myself sitting in the lobby of their building the day after the Medical Center taping, learning that I'd agreed to serve on a panel on the subject of bi-racialism! This had apparently grown out of the feature article which appeared in the San Francisco Chronicle on the eve of our trip. Yes, the same article that had caused me to object to as being out of sync with my self-identification.

It wasn't until the other panelists arrived that it slowly dawned - what I'd gotten myself into inadvertently. And -- here I was in full ranger regalia at an assignment that really required my conservative black crepe suit with pearls -- conservative dignified older woman garb. Chalk one more up to confusion caused by events-moving-far-faster-than-I.

Dana King, news anchor, (also bi-racial), had brought together a small group (4) of light-skinned "African Americans" to discuss "living as bi-racial citizens in today's national scene." This, being clearly related to the racial status of our new president.

I felt totally out of place. I did not feel appropriate to the subject or to the panel since I do not identify as bi-racial. This may seem nuanced to others, but it's very basic to me. Had this happened in any other decade of my long and varied life I might have given any number of answers as to my skin color's effect on that life. In these final years I'm quite clear about who I am and of what it means in the scheme of things. I am African American. Black! No ambivalence about that. I would have it no other way. As stated during the interview, I'm no longer becoming. I'm now simply being, and it matters greatly to me just how that is viewed.

My problems around skin color come from external sources. I look out of this casing, not at it for the most part. Were it a matter of race being determined by the degree of melanin in one's skin, tanning salons would have taken care of this debate long ago. It is not. If it were, actor George Hamilton and golfer Vijay Singh might find themselves with a lot of 'splainin' to do!

I am Black because I've lived the Black Experience. That cannot be changed. The ultimate test for me is that -- if suddenly out of nowhere the sound of Marvin Gaye's "What's Goin' On;" Aretha's "R-E-S-P-E-C-T!": or anything by Ray Charles or James Brown were to fill the room my head would begin to bob to the right; my middle fingers and thumbs would itch to connect, and my chromosomes to leap up in a grand high five! I can join any conversation in the middle of the fourth paragraph with any other black person who walks into my presence (providing they're not speaking some other language) ... and ... though I've acquired enough culture to know not to applaud at the end of a movement during a chamber music concert ... (along with other folks like me), I secretly suspect that there is no Bach composition that couldn't be improved upon with a little Miles on trumpet, Max Roach or Joe Jones on drums, and Charlie Mingus on bass!

At this age, I'm convinced that there are more cultural than biological elements to race and that they're produced by life experience. I will forever be marked by having grown up under the "one drop rule."

I could only vaguely identify racially with the beautiful brown-skinned curly-haired young panelist seated to my left during the interview -- whose mother was "a green-eyed fair-skinned blond" and whose father was obviously not. She made it a point to mention that she operates a camp for bi-racial children (suggesting race as pathology?). Her plight was as alien from my life experience as could be; more like that of our new president. She stated during the course of the interview that she now identifies herself as a "barack."

Bi-racialism occurred in my family during the mid-19th century but we (like most other people of color) are by now polyracial and forerunners of what the world's people are now or will become within the lifetimes of future generations.

But I'm praying that -- what is culturally rich and distinctly different from all others -- will not be lost to the whole. That -- as has happened with my magnificent African-French-Cajun-Creole New Orleanian heritage -- what is African American in the culture will not be sacrificed upon the altar of acculturation.

If we could strip all of the black jazz/gospel/blues influences from America's music -- there would be little left but Lawrence Welk!