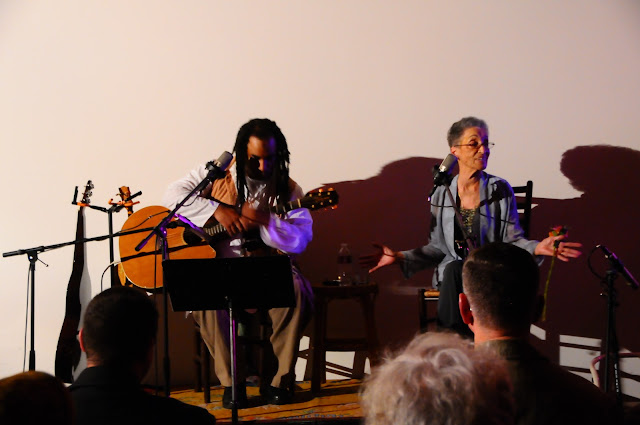 ... except that on the morning after my dream concert, the owners of Nexus  -- the beautiful Buddha-filled site where the performance was held -- invited me to sing the National Anthem at a press conference aboard the USS Iowa, the battleship moored in the Port of Richmond undergoing repairs before sailing south for a new life as a naval museum.  The event was held in commemoration of Pearl Harbor Remembrance Day; December 7th.  We old battleships are seeing a resurrection of sorts, right?

Alas, it was an honor just a tad too far and I regretfully declined.  Not looking to extend my now reinstated temporary career as an over-ripe chantoosie, and, not seeing any possible way to sing myself through the National Anthem without tripping and falling on my face, I said no to this great honor.   Singing before an audience of lifelong friends in celebration of my birthday while raising much-needed funds for a program that has meant so much to me and to Dorian was a very special thing -- to be treasured for all time.  Adding another facet to my now more-public-persona than I'd ever dreamed of or wished for, I felt in danger of over-reaching and that would be tragic. 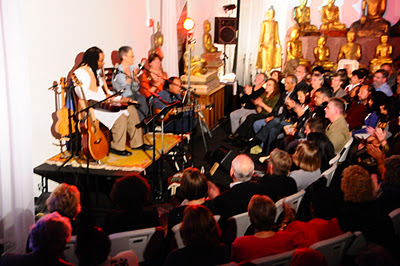 I did attend the press conference as a part of the National Park Service delegation, however, and explained to our hosts when asked, that I might have said yes had he invited me to sing "America the Beautiful."  And, you know that might not have been so easy to refuse.  I've always so loved those lyrics ... .

especially those brilliantly instructive lines in the second verse:

"... confirm thy soul in self control, thy liberty in law."

Magical!
Posted by Betty Reid Soskin at 7:19 PM No comments:

In the weeks leading up to that incomparable evening there was the opportunity to work with Tru Peterson, a brilliant jazz guitarist who is a graduate of Boston's Berklee School of Music; a colleague of Wynton Marsalis; who toured for a time with the folk legend, Joan Baez, and later with jazz singer Cassandra Wilson; and is currently teaching and performing in the Greater Bay Area.

We had four evenings of working together at my home in preparation for my appearance before a live audience -- 4 evenings of feeling the years drop away -- and for the first time in about 50 years I was going to sing before an audience!  I had no idea what would happen, but the experience became increasingly important to me as the time of the concert neared.  Now is a time for integration, and bringing more of my "selves" together in what is surely my final decade has almost become an obsession.

I'm not at all certain that -- had it not been for the support and encouragement of my son, Bob, I'd ever have followed through.  He was insistent and loving and probably should be recognized as having been the motivating factor in this great adventure.  Bob, along with his music partner, Margaret Miles, appeared together with me on stage for the first time.  I think I've always seen Bob as living out those inherited music genes that I'd so long ago disowned.  He is a natural performer who has lived his music with passion throughout his life.

In the beginning I felt tentative and for brief moments wished I'd not committed to exposing myself to ridicule (one friend aptly called it the "cringe" factor).  My voice seemed to have shrunken to a whisper, and I was rushing the phrasing and could see that Tru was having difficulty reading the level of my musicianship.  I don't think that either of us doubted for a minute, though, that it was still there, though suffering from sheer panic, surely.

That evening I was surrounded and embraced by friends, some from a time when I was ever so young -- composing and singing -- and many who had no idea that this was ever a part of my life, but who only knew me as a community activist, political ally, wife and mother, and -- more recently -- park ranger; certainly not as poet or singer.  How would the revelation of the long concealed artist in me affect the rest of my life?  I'm guessing that I am the only one concerned with the question.  It probably held little importance to anyone else, and I'd wake the day after to find little has changed.  And, you know what?  That's precisely what has happened.


The goal of raising enough funds to make a significant donation to NIAD was more than met, thanks to the support of so many friends and family (and a few strangers) who filled the room to overflowing!

Life is spectacular, thank you!

Photo by Ellen Gailing
Posted by Betty Reid Soskin at 12:26 PM No comments: