What on earth could the tragic August death of the Oakland Post columnist Chauncey Bailey; St. Benedict's Catholic Church, and Monarch butterflies have in common?


They all became a part of my kaleidoscopic mind during the services held yesterday for my newly-found and forever lost cousin, Rae Louise Hayward.

Rae was unknown to me until earlier this week (as described in the last post).

I learned from our excited long time family priest, Father Jay, on my cellphone on Thursday in the middle of late afternoon freeway traffic -- that he had this very week learned of the passing of one of my cousins. This would be the third such call from someone close to me with the same message. "I learned in a conversation with your cousin, Joyce (Rae's mother), in answer to a casual question during our Monday meeting for the funeral arrangements -- that her maiden name was Charbonnet."

He was stunned. This was his story:

At the time of Chauncey Bailey's tragic murder on Oakland's streets back in August, Rae Hayward (being his close friend) offered to his overwhelmed and grieving family to handle the funeral arrangements and help to plan his memorial service.

St. Benedicts was Chauncy's church home which connected her with Fr. James Matthews. Remember, Rae lived a considerable distance away in the town of Pinole, a half-hour's drive across town in another of the small cities that make up the East Bay Area community.

During the time spent together planning, Rae, whose health was failing from a rare form of cancer she'd suffered since childhood, decided to make advance arrangements for herself with "Fr. Jay." With him she planned her funeral. She, too, would be buried from St. Benedicts. That was August-September. Rae died on January 3rd.

As stated in the previous entry, Rae (and her mother, Joyce) would not know that this was the "church of our fathers," since my father and her uncle, Dorson Louis Charbonnet, was one of its founding members, or, that this was the church of my childhood and that most of the members of our family, including both my parents, were buried from this altar.

Fr. Jay -- who has baptized, married, and buried Charbonnets for many decades; Fr. Jay who had grown up in the East Oakland neighborhood where I'd been a classmate of his parents at Castlemont High School; Fr. Jay who had been "one of us" for all these years -- would officiate. He included some of this in his sermon, including the fact that -- without knowing of her blood ties to St. Benedicts -- she had come home. That --

"in death, she was bringing together for the first time -- the 12th and 13th generations of Charbonnet family members at this very moment and in this place."


I looked down in my hands and noticed that the car keys that I was holding tightly were held together by a giant metal butterfly. The symbolism formed in my subconscious in that moment to appear later in sleep.

I looked around during the singing of Amazing Grace and noticed that this was no longer the building of my childhood (the old modest St. Benedicts held no more than 100 parishioners at any one time); that I didn't recognize these stained glass windows nor this apse or pulpit. I visualized my father, Dorson Charbonnet, solemnly joining his fellow member of the Knights of Columbus as they passed the long-handled collection baskets then retired to the little room at the back of the church to count the collection. I remembered my parents celebrating their Golden Anniversary here in the social hall surrounded by friends and family - his Southern California brother, Melbourne and wife Grace, among them.

I remembered then that the fragile Monarch butterfly whose home is in Canada and up and down the Pacific Coast -- that they travel thousands of miles to end up on a single mountain top in Mexico each year in November. That they cannot fly above a certain altitude and that they mate along the way feeding on nectar. That their individual life span is but 25 days and that those that arrive at the southern terminus of their long migration are not the same butterflies that left the north. They repeat the process on the return journey north; one of nature's great mysteries.

I thought then of Rae Louise Hayward -- then as Fr. Jay lost himself in the liturgical part of the mass (uttering to himself quietly the familiar Latin rite of the offering of the Eucharist -- raising the goblet skyward then accepting the "body and blood of Christ") I found myself moved to a place I hadn't experienced since adolescence. I turned to my niece, Gail, and whispered. "After more than fifty years, I'm going to receive communion." And, this non-believing, atheistic-agnostic, sometimes cynical elder -- drawn by the casket draped with African mud cloth holding a cousin I'd never met -- walked to the altar rail to receive the host from a smiling Fr. Jay. I wondered if he knew that I'd not gone to confession since I was about 16. "Bless me father for I have sinned ..." was a long way from now, and irrelevant in this moment.

Somehow my failure at Catholicism; my stubborn lifelong need to form my own beliefs unrelated to orthodoxy or dogma -- based upon logic and intellect was of little importance. This was much larger than that. What needed honoring in whatever form was at hand was that mysterious blood connection rooted in human relationships and legacy in common -- the importance of being a member of a family which shared genes and dna for centuries, at least since 1620, according to our research. That the lovely woman in that casket and I never got to meet was of less importance than the fact that there in that little church -- we were both at home.

Rae Louise (Charbonnet) Hayward; in death you accomplished the impossible. You reunited your family -- and me with my beginnings -- the how of our journey through this life hardly matters.
Posted by Betty Reid Soskin at 12:10 PM No comments: 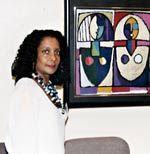 Posted by Betty Reid Soskin at 7:54 PM No comments: