A Christmas gift to remember ...

The email below was received one day after the New Year was rung in -- and just as Dorian and I were recovering from this year's version of the flu epidemic.  After hobbling to my computer after drinking the final dose of flax tea (ugh!) and after almost 35 hours of not checking my mailbox, this lovely little note from a total stranger turned up and righted my world which was disastrously listing on the Sea of Life.

This is about my dear now gone but still-loved Dad,  Dorson Louis Chabonnet, artist and craftsman supreme and the best maker of kites, and stilts, and "draw-er" of the most meticulously-measured hopscotches on the block!

Mr. Nett will never know how much his  tenderly-written note meant at a time when Christmas season had turned into such a nightmare.

I'll include my response tomorrow, but now I need to get out from under my hat and into something more appropriate to celebrate the eighteenth birthday of Alyana Reid, my college-bound granddaughter (next fall).

How I wish Dad had lived to see his younger grandchildren -- but he spent his last decade in darkness.  His eyesight failed totally, and (presumably) blindness was already descending when Stephen received his kite -- though I don't believe that I was aware of it at the time.  A truth that may have been shared with his male friend (Stephen's father) long before his family knew.  He was always the strong protector of family, and would have played his hand that way to the end. 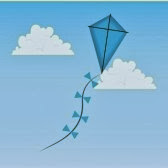