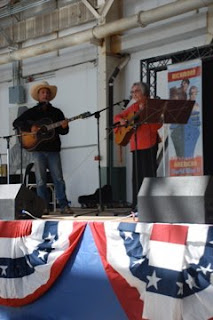 This weekend brought with it the 2nd Annual Home Front Festival, an event still in the process of becoming. One day we'll look back to see just where new traditions were born, and find the beginnings of "custom" and "practice." I suppose this is how it happens. Maybe it's no more complicated than the fact that -- for reasons unknown -- I always climb into bed from the left side even though I sleep alone. Reasons are now lost in time and "custom" takes over, even when the experience no longer provides any rhyme or reason.

Faith Petric, our 93 year-old "Rosie" was phenomenal! She is a tiny woman with a twinkle in her blue eyes that hints of the mischief that's barely hidden. She sang labor songs and Woody Guthrie pieces and performed a duet with my son, Bob, called "Why am I painting the living-room?" that was so wonderful that I felt giddy knowing that it was all being videotaped for posterity. Faith rece

ived her plaque (beautiful!) graciously and will take off tomorrow for Ireland where she will be visiting her daughter who lives there. I suspect that she'll be singing in some Irish Pub, surely, and not too long after she de-planes! 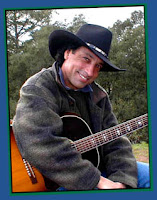 This is a woman to marvel at; a life to celebrate, surely. She has positively influenced several generations of young people, my son Bob, among them, and has enriched the lives of a steady stream of adoring singers and musicians who've gathered at her home in the Haight-Ashbury on Friday nights for almost fifty years. What a lovely woman is Faith Petric!

Posted by Betty Reid Soskin at 11:11 AM No comments: