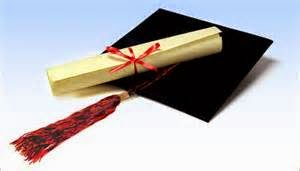 The question comes up occasionally during the Q&A, and I don't think that it's being answered as completely as it should be ... .

"You are obviously well-educated, Betty, what college did you attend?"  Usually asked by someone who then goes on to add, "... your vocabulary certainly reveals that."

There is usually a pause of a few seconds as I weigh just how to respond, and it may interest you to know that there is some discomfort -- uncertainty -- an awareness of what I've always seen as a deficit in my education.  My education didn't extend beyond high school, so to answer with what feels to me as a reminder that I'm among the unwashed ... .

It occurs to me that what we have here is a lack of complexity that doesn't allow the truth to be revealed; my answer should be nuanced.  It is this:

My education took place when the California public school system was the envy of the known world. This would have been prior to the enactment of Proposition 13 which started the dismantling of that system.


Also, because there were so few African Americans living in the State or the Greater Bay Area before WWII, there were few reasons to have anything but a great general education for everyone, so I escaped the handicap of being squashed under the crushing weight of low expectations that now becomes the fate of disadvantaged children of color.  For whatever it was worth, I was receiving the same training into the same culture as those around me.

Not only were my influences Jack London, Mark Twain, Willa Cather, the Bronte Sisters, Rudyard Kipling, Louisa Mae Alcott and Edna St. Vincent Millay, Alfred Noyes, James Whitcomb Riley,  and Eugene O'Neill, but by fifth grade I was singing the operatic works of Giuseppe Verdi, and Sibelius's Finlandia with our glee club!

Richard Wright's Native Son and the poems of Langston Hughes, James Weldon Johnson, and Gwendolyn Brooks I would not be exposed to until young adulthood. By then my racial designation would have become hyphenated by the experiences of WWII on the Home Front and the Civil Rights Revolution of the Sixties.  Before then I was simply a youngster being educated to the majority culture.

Of course, one might say that I was missing the black artists, authors, and scholars, and that is true. But I was being educated for the state and nation I was growing up in, and being acculturated at the same time -- which would serve me well over time.  The fact that, eventually, I would be exposed, in depth, to both black and white cultures has been a gift to be cherished.  Maybe that would be the ideal for us all.

In high school we performed Maxwell Anderson's Winterset in my junior year drama class, and I read and analyzed Shakespeare in English Lit as a senior.  The training received in Mr. Bill McLaughlin's public speaking class is still with me in our little theater every Tuesday, Thursday, and Saturday.  "Stand straight with weight on front foot -- take a deep breath, and start the first word on an exhale, etc."  The ability to analyze material, debate issues, and defend my positions was nurtured by what happened in that exciting class where kids could differ and grow.  Where questioning was encouraged, and cynicism rewarded if rational.

And I can still hear those oratorios screamed in the thin treble-clef voices of children before the little silver pitch pipe and waving baton of full-bosomed and bespectacled Mrs. Edith Reiniger whose great passion for Giuseppe Verdi's il Trovatore fed our little souls.  No I've been working on the railroad or My Darling Clementine for us!

... and at this point it matters not that throughout my childhood and into my adult years I still remember that California was first settled by Father Wanna-pera Serra!  (How on earth did that young teacher ever get out of school without learning how to pronounce Junipero?)  But nothing's perfect, right? ...  not even the greatest educational system in the world in its day.


"I didn't go to college," then is probably only half true.  The fact of when I was educated says it all, I think.  I'm guessing that those students who shared those years with me received what would be seen today as at least two years of learning in any community college or higher.

This all happened, of course, before the systematic dismantling of public education began in this country, and before charter schools would be even dreamed of.  And those, you remember, were the years of the Great Depression, the Works Progress Administration (WPA), joblessness and bread lines, and my mother turning up at "Sally Ann's" (the Salvation Army store) early on Thursday mornings when the trucks were unloaded -- to get first crack at whatever books (for 25 cents) were among those discarded by the "Haves".

"I didn't go to college," are words that simply don't cover my educational experience.

Posted by Betty Reid Soskin at 1:45 PM No comments:

... and the Yellow Brick Road looks unexpectedly familiar.  Though there have been rough places and demons to do battle with along the way -- little here is surprising.  And I blush to admit that so unashamedly.  It's not that I don't see the specialness of it all, it's just that the miraculous aspect of everyday life is something I'm tapping into more and more these days, with a growing sense of wonder that we tend to walk through the miracles each and every day without fully appreciating this life as it unfolds before us in whatever ways it expresses itself.

Wish I could figure out how to share the great video piece that ran throughout the Department of Interior on their weekly "This week at Interior March 27, 2015" but you can access it on YouTube.com if you wish.  I can't figure out a way to link it, or, to even fix it so that you can copy and paste, and today is Sunday and I'm at home without the benefit of being able to have our graphics person, Luther Bailey, walk me through it.

Suffices to say that last week's visit to Rosie the Riveter/WWII Home Front National Historical Park of not only the Secretary of the Interior, Sally Jewell, but Jon Jarvis, National Director of the National Park Service, and, regional director Chris Lehnertz, as well, spent Thursday afternoon with us, and a warmer more congenial group I've rarely experienced.  What a time!  Sally Jewell is someone I'd find it very easy to love.  What a charismatic and lovely woman is she!

That they were truly impressed by what we're building here was clearly obvious.  That we're layering back in the nuances and complexities of the Era of WWII at a time when those lives and times are so often compacted into bumper stickers is being appreciated by Washington.  It is clear that those whose work guides our ability to do that are fully aware of our challenges and small victories.  I don't think I've ever felt so affirmed.  So surrounded by enablers.  We all did.

The day ended with a quick drive home to change out of uniform and into more glamorous civvies to attend a reception at Alumna House on the UC Berkeley Campus -- held in honor of the dignitaries gathered here for consideration of plans for the upcoming National Park Service Centennial year 2016, and to tackle the vitally important environmental questions that are before us as a nation and a world.

... it was during the reception in that lovely tree-shaded gracefully designed building that I felt the first pangs of being completely awestruck by the unexpected turn my life has taken in recent weeks.  Upon arrival I entered the room where there was not a single familiar face.  Having outlived most of my contemporaries, I'm now facing a re-peopled world.  I'd arrived far too early and before the others came.   But standing nearby was the UC Board of Regents Chair, Janet Napolitano, and just beyond, historian Douglas Brinkley.

The world of the Academy was alien to me, but reminiscent of the years spent as a faculty wife, Mrs. Dr. William F Soskin, Ph.D., research psychologist connected with Tolman Hall on this very campus.  I'd never quite fit into that Betty's shoes, and the ten years we spent together hardly made a dent in that insecurity, though they brought new opportunities for learning previously not open to me, and re-cast my known world with new friends and possibilities.  It was those years that launched political Betty.

This time I'm the grownup!  These are the kids.  I've attained an eminence over the years through  unsubscribed and unintentional ways but it doesn't really matter at this point.

The game's almost over ... and just when I'm finally beginning to understand the rules of engagement ... .