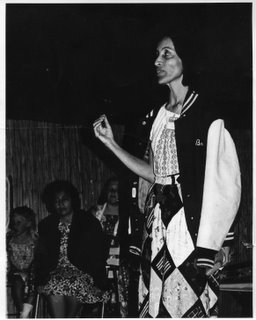 Finally got that call from Bob.

Feeling more comfortable and have lost that sense of being in suspension around "I know not what."

Was reminded of a story I've been meaning to share when the immediate pressures from the awful overseas news slowed down a bit. The state of the war and the world have tended to keep me mired in the present with less inclination to be nostalgic. However, in a quiet moment recently when I ran across the script for a documentary I wrote and performed the music for. It was one of those moments in time that defies explanation but that simply is:


I'd experienced several episodes that were symtomatic of mental illness. It manifested in an inability to drive through tunnels or to cross bridges, even those not more than 100 feet. During that time I'd blacked out at the wheel of my car while driving through the long Broadway tunnel that separates Oakland/Berkeley from the Diablo Valley. Someone driving behind saw me slump slowly behind the wheel. She straddled the double line to keep anyone from trying to pass -- while following me closely out of the tunnel. Fortunately, I was close to the eastern end, on the Orinda side, and with my car still in gear but with no pressure on the gas pedal -- my car slowly rammed into the side of the hill at the exit. Woke up moments with a Highway patrolman at my window checking me out -- with kindness.

At another time I attempted to drive across the S.F./Oakland Bay Bridge only to find myself unable to make it all the way across -- suffered a panic attack halfway and wound up on Treasure Island. A Coast Guard escort eventually escorted me to the other side; embarrassing, and equally dangerous. My tendency as always was to grit my teeth, crash up against my fears and court disaster. I think that's called a suicide wish, but it certainly wasn't what I thought I was experiencing. Later in therapy I would discover that at least one obvious explanation was that both tunnels and bridges took one to definite destinations -- and once entered into or upon -- there was nothing to do but proceed through or over to the end. It was the divorce decision that I was simply unable to make.

We were still living in Walnut Creek, and all of the "good" surface things were present in my life -- a family that I loved, a kind husband who provided for our wants as well as our needs, a lovely home on a wooded acres bordered by a creek and 4 huge oaks, a swimming pool in the backyard, the wood-paneled station wagon and correct wardrobe for suburban life. It was all there. Why on earth would I want more? And, what on earth was that "more," anyway? Except that I had at least one troubled teen and a beautiful little 3 year-old who was hopelessly brain-damaged and a husband too resistant to accept the implications of that. I was pretty much alone with Dorian's disabilities at that point. My parents were telling me not to worry, that she was "... just a little slow and would eventually catch up".

The mental illness sharpened my already overactive intuitiveness and sensitivity. I'd begun to write music and produce wildly colorful abstract paintings, all in an attempt at traveling without leaving home. Pure survivalist escape.


While that was all going on, I performed with other artists singing a growing repertoire of original songs from time to time -- in concert or evenings among friends. One such evening there was a woman in the audience who turned out to be the wife of a filmmaker studying for his masters at S.F. State. She approached me at the close of the show with the words, "...you're singing my husband's footage! If you'd be interested, I'm sure that he'd love to meet you. He's just about ready to add the musical score to his work. It's his master's thesis."

How exciting! Exciting enough for me to -- in the days ahead -- meet Charles Petersen and agree to make the trip to San Francisco State's studios to tape two songs for his documentary, phobias be damned!

The subject matter was of interest since it was based on the fact that the beacon light on the Farallon Islands was to be deactivated soon and when that happened, the wildlife would be placed in jeopardy. His documentary would be presented to the Coast Guard and to the Audubon Society in hope of keeping the light in operation as a deterrent to boaters approaching too close to shore. Any seacraft passing close to the island would cause some birds to leave their nest and take flight and, in so doing, their eggs or nestlings would be devoured by the less-shy gulls who were fierce predators. An entire year's nestlings could be destroyed without casual passersby being aware of the peril they'd caused. An important message. This was enough reason to risk the drive across the bridge.

I'd learned from my therapist that what happened at such moments was that -- in my panic -- breathing would become increasingly shallow and that I would eventually hyperventilate, losing consciousness at some point (as in the tunnel). Devised a way to handle such a situation. It was logical and sensible. I would drive across the bridge in heavy traffic with the windows open and singing all the way! When I sing (with the radio) my breathing would be natural -- determined by regular phrasing of the lyrics -- and even -- predictable. I could not run out of breath. If it became shallow, I would be aware and pull over if possible. It worked. On the appointed day I drove all the way from Walnut Creek, through the tunnel to Oakland, then across the Bay (through another tunnel at Treasure Island) and onto the busy freeway to South San Francisco. Spent the few hours that it took to record the sound track then repeated the process on the trip home. The return trip was more of a challenge since I entered the horrendous afternoon commute traffic at that hour.


Now we skip to a few months later when we (Mel and I) were invited to the S.F. State Film Festival on the night that the winners were to be screened. Mel drove us there. Charles Petersen's "Farallon Light" had won the competition and was being shown last on the program, in "star" position. It was a 30 minute documentary designed for showing on the local PBS stations.

Just before the last film was to run, the second-to-the-last, second prize winner, came on screen. It was a shorter piece that opened with a dramatic helicopter shot picturing the western end of the Bay Bridge at commute time. The narrator was saying, "...in any given year _____drivers spend_____months on this heavily-traveled bridge. In any month____ hours, in a week____, in a day___. (He'd done the multiples.) Then he went on, "how is this time spent?" At that point the camera zoomed in on closeups of people shaking their fists at other drivers, swearing out the window, screaming 4-letter words, giving one-finger-salutes, changing tires while other drivers yelled their disapproval, and then... suddenly a yellow coupe is zoomed in on -- merging into the traffic easily, and -- with windows down, head and shoulders back, singing with all her soul is Betty! I'm looking for all the world like a carefree woman on her way to a cocktail party or to meet a lover! In addition, this was probably my first trip across the Bay in over a year -- in comparison to the many thousands of commuters who drive that route every day of their lives. Serendipity thy name is Betty.

Can anyone even guess the odds of that happening? There were literally thousands of drivers on that bridge approach. There was no way for anyone to sit and wait in that traffic for my car to appear. There was simply no way for me to "drive into his script." I sat there beside Charles Petersen and his wife that night knowing that no one knew that this was I up there on that screen. It was crazy! The image was just fuzzy enough so that I was not immediately or easily identifiable. Looked over at Mel but he obviously didn't recognize the image. I remembered, then, the day when a station wagon with its back portion covered with an old tarp drove alongside for a long while in the barely-moving commute traffic --- all the way to Treasure Island. I noticed it at the time and eventually closed my car window -- feeling strangely invaded, but not knowing why. Now I knew. The feeling was right on. The irony was that of all the people filmed, I was probably the most uptight, and not at all what was being depicted up on that screen. No one could know that. Only I knew the truth.

Charles Petersen's documentary (with my voice singing the score) went on to win prizes at the Atlanta Film Festival, in Toronto, and eventually in San Francisco that year. It was the film that has been regularly shown at the Lawrence Science Museum high in the Berkeley hills on the U.C. campus for some years. I discovered it there the day that I took my 6 year-old granddaughter, Kokee, to the Museum and -- as we walked down the hallway past the labs to the theater -- sounds of my own voice drifted out to us. I walked in with her just as the last song was being sung and the credits were running on the screen. "Music by Betty Reid." The theater was dark and empty. By this time I was remarried and living in Berkeley and far removed from my "poet" self. It was like listening to someone I barely knew. I again marveled at the secondary story that few would ever know. Now you do.

Have never been able to obtain a copy of the film or videotape, but still have the script with text, stills of the bird life, scenes of the island here in my files. There is also the memory of the trip to the Farallons on the day that the last Coast Guard light tender was removed from the island. The film was shown on board that day. The ultimate effect of the documentary was that the Audubon Society moved their staff onto the site, permanently, for the protection of the wildlife. The Farallons became a sanctuary and still is.

Photo: If you've ever wondered about what the effects of suburban racism, life with a troubled teen, a too-busy husband, plus a developmentally-disabled daughter might look like, click this thumbnail open. Were it not for the sanctuary provided by the artist Betty who emerged to take over, I'd never have survived. Of that I'm quite certain.