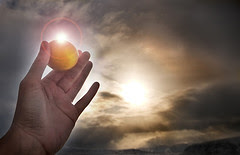 What on earth is an Atheist doing in a seminary? And well you might ask ...

This last post was written while I was serving as a member of the Board of Trustees at Starr King School for the Ministry, a member of the Graduate Theological Union (GTU) on the border of the University of California, Berkeley, campus. One of the privileges of serving was the opportunity to join graduate students studying theology at any time during one's tenure and as often as one felt the urge to do so. It was not for the purpose of monitoring classes, but fulfilling the duties required of all students -- by completing reading assignments and taking part in discussions and seminars for a full semester. A typical class might involve 12-14 students plus a professor or two.

The GTU is a consortium of schools and seminaries clustered in an area called "Holy Hill" just north of the UC campus. There are more than a dozen religious institutions sharing classes and an amazing library in common, and whose students study together, ecumenically, though registered formally in his/her own schools. Sitting in a study group with Buddhists, Jews, Franciscans and Jesuits, priests-in-training and nuns, Episcopalians, Baptists, Wiccans, United Methodists, Presbyterians, yes, and Unitarian/Universalists, etc., is a very ordinary state of affairs. Some students would be studying for parish ministries while others were preparing for moral leadership in a variety of settings, including public service, prison chaplaincies, or legislative practice from a position of conscience.

The GTU/Starr King experience was rich beyond measure, and fulfilled an insatiable hunger for spiritual inquiry in an environment of total acceptance and respect. I could probe and test and wonder in a place where there were no intellectual or spiritual boundaries.

I miss the mental stimulation that I now must find elsewhere ... but I must admit that the Internet has afforded me some extended trips into realms I never dreamed I'd get to explore.

...maybe I'm missing my Unitarian Universalist connections, though, but -- on the other hand -- maybe I'm simply responding to the fact that tomorrow is Easter, and I have my fancy hat but no place to go ... .

That's the problem with Atheism and Humanism; no Easter hat tradition!

Posted by Betty Reid Soskin at 5:40 PM No comments:

Cleaning out the files, again, while responding to the reawakened effects of Good Friday, I suppose ... (once a Catholic ...)

Fascinating class at Starr King School for the Ministry today. We were still dealing with Breech's "The Silence of Jesus" (and I had not read the assigned pages) and everyone was filled with questions about the symbolism represented by the parables. My head was still back with Hawking; and the interesting ways those images of the nebulae have been playing against the back of my eyelids all week ... .

Not sure how my mind made the leap, but at some point in the discussion I found myself realizing that -- despite my atheism -- I really have no particular quarrel with either the Jesus-centered stories or with any of the prophets that time has delivered to different places at different times in history. At some subliminal level I must have found that the only times I have trouble with organized religion and theocratic dogma are those times when I've forgotten that the historic Jesus may have been less teacher than seeker, as I am -- as we all are, and that the important thing for me is to try to discover is just what it is that I already know, and that when that great truth (for me) is revealed, it is my suspicion that it will be elegantly simple and that I'll realize that I've known it all along. ("The kingdom of God is within you?")

Maybe that's the fascination for me with Hawking, Einstein et al. They may have tapped into a place that I stumbled upon years ago while crossing that line which "The World" claims for "sanity" and into the realm that the world defines as "madness." It was in that place (during a mental breakdown/breakthrough) that -- for a period of time -- I found myself blessedly out of sync with time. That state of being may be what is required for a full understanding of the universe and those dimensions that we can get brief glimpses of -- only if we are either mad enough, or (as in Hawking and Einstein et al) brilliant enough to transcend the limitations of our humanness. 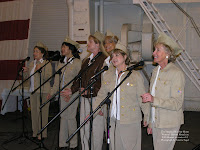 Response from the USS Hornet ...

From: "Jon Stanley"
Posted by Betty Reid Soskin at 11:02 AM No comments: 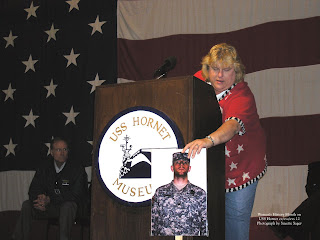 To the fulfillment of good manners -- and more ...

From: cbreaux@earthlink.net
Sent: Monday, March 19th, 2007 1:16 PM
To: Jon Stanley
Subject: Thanks so much for a memorable experience ...

I will treasure the memory of how overwhelming was the sight of that huge carrier as we approached from the roadway to the pier! How tiny I felt, but how warmly and welcoming were the faces of all we came in contact with over those few hours.

I came so close to calling to cancel as the weekend approached and I, a peace activist, realized that I would be standing on the deck of the USS Hornet, the ultimate symbol of western armed forces dominance at the precise moment that presidential hopeful, Senator Barack Obama, would be appearing in Oakland within just a few miles, and that others with whom I share concerns would be gathering to demonstrate against the war in Iraq -- just over the bridge in San Francisco ... such irony. I was so conflicted ... .

I'm grateful now that I didn't retreat but was able to participate with integrity while surrounded by Blue Star Moms; a woman commander naval pilot of distinction; a tugboat captain; and several civilian flyers -- and still find common ground -- all women who care about our young and pray their safe return. Together we represented the very essence of what it means to be citizens of this great nation -- able to freely express ind 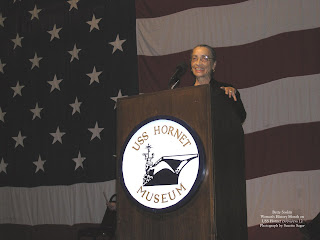 ividual versions of patriotism without rancor - and that we could do that on board this great vessel without restraint was a statement that the USS Hornet can be proud of, indeed.

Thanks, again, for an unforgettable day.


Photo: A Blue Star Mom displaying and defending her Marine son who is currently serving in Iraq. This mother was not listed in the program so I don't have her name -- and I suspect that she rose spontaneously from her seat to try to counteract my statement. In looking back, there was obviously room for all opinions. Between us, we aptly provided the polarity that exists in the country.

Posted by Betty Reid Soskin at 10:44 AM No comments: