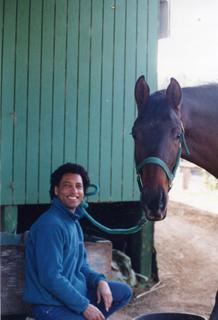 Been reluctant to admit to myself that a casual statement by someone had a chilling effect upon my ability to speak without censoring myself. There has always been a line that I won't cross, knowingly, in what I dare to reveal, but it has to do with privacy issues, and the dictates of my own sense of ethics. I've never mentioned, for instance, precisely why I resigned from my last position -- except to say that it was a "matter of principle." That seems fair. Also, in a recent conversation with son, Bob, I discovered that something that I'd alluded to had angered him. He'd felt that his privacy had been invaded. Not sure what it was, exactly, and I've never scrolled back to monitor myself -- but I'll take his word for it. My only defense is that whatever I wrote was a figment of my own perception, and not of his reality. That's a subtlety that doesn't stand up against hurt feelings of someone I love, so I'll watch myself more closely.

It was the day I started work with the NPS, when I learned that someone on the city council had mentioned that I was writing a "public blog," and I realized that this could be a problem. Suppose I wrote accounts of my work situation and my personal interactions with my co-workers? That surely might make for some nervousness, right? Hadn't given that a thought. Though I really don't believe that this has been a problem in the past, but I might find some embarrassing entries were I to take a trip back through these archives, so I'll just hope for the best and proceed. But it's not quite the same. It's taken a week to even admit to myself that I felt intimidated ... .

Truth is that I'd rather not write at all than to censor myself. After all, this is (hopefully) an accurate accounting of "life as lived, by Betty"

Because I was in that mindset, I found myself -- throughout the week -- in one situation after another, judging whether it was something I could share publicly?

My immediate supervisor popped into my cubicle a few days ago with a sheaf of papers in his hand. There were a couple of assignments he needed to pass along with some instructions. I looked at the top sheet quickly and notice that it was a letter from the DAR (yes, The Daughters of the American Revolution). They were requesting a presentation on the Rosie National Park to be given late winter or early spring. I looked at him and laughed! "Do you mean that you'd actually trust me to deliver a talk before the D.A.R? Me, with the long memory that includes Marian Anderson's memorable concert at the Lincoln Memorial lo those many years ago? You mean THAT D.A.R?" It was for a chapter in the suburbs, the same suburban area where I'd given that much-talked-about Martin Luther King Day speech just last spring. Remember?

I placed the letter in my In-Box to await a time when it needs to be dealt with. Lots of lead time. Maybe I'll be long gone by then, anyway. If I'm lucky, the decision will never have to be made.

The work goes well. I'm getting into the rhythm, and -- among other things -- am finding myself with the responsibility of creating a library for documents relevant to an era that is appropriate to my age and interests. This week I will lead a tour (I'm told) of tourists. It probably won't be much different from the tours I led our staff on when working for Dion and Loni. I LOVED the Richmond that I'd adopted, and saw opportunity where others seems to see only blight. With the Park, I'll need more time to sit with the documents and cram that history into whatever "files" are left unused in the old brain. It seems strange that so much of it comes to me as brand new. After all, this is presumed to be MY history, but in many ways -- it is not at all what I lived.

African Americans functioned in a parallel universe, I think. My memories of the era differ immensely from that of the Rosie stories that have been submitted from women and men from across the country. The time may have come when I'll have the need to morph those memories into one, but I'm not at all sure that I can. The next few months will call for some stretching, as I try to bring the Park and the community and my personal past into some kind of alignment. I'll be speaking before community meetings where an honest attempt will be made to bring that all together, if possible.

Received some stories from a writer on the east coast who studied the African American participation in the shipbuilding industry during the war. He is not African American, so the 3-pager seems not to tie too closely with my recollections, but he did write about some facts that were new to me. There were 13 victory ships named for African Americans. I was aware of only one; the Robert S. Abbott, named for the publisher of the national black newspaper, the Chicago Defender. There were some obvious names listed, i.e. Frederick Douglas, Bert Williams, Robert Abbott, but for the most part -- I could not identify most of the honorees. I have photographs of the launching of the Abbott and of the festivities that followed. The writer's brief history plus my historic photos will serve as the beginnings of the building of a presentation that may encourage more participation in the park planning process by people of color in Richmond. It's a place to start.

Found myself thinking of ways to use that paper and the author's list. Will try to get some organization (black) to hold a contest for teens. "How many of these African Americans can you identify, and why were they chosen?" That brought on the thought that these names were chosen by the federal government (Dept. of Interior) as a way of rewarding and encouraging the black community's working hard in the home front war effort, and that would be why these names might not be familiar to me and others of the times. Black folk might have created quite a different list. One might have expected W.E.B. Dubois to have been among them, and surely Crispus Attucks of Boston, the first casualty of the Revolutionary War. Honoring Nat Turner of the Slave Revolt, might be a bit of a stretch, but surely there were others of equal power and but less notorious. That was a bit early for James Baldwin or Thurgood Marshall, but some sleuthing might be fun. I dream of the possibility of sending black kids to the Internet to do this kind of research. It could be more relevant to black kids than looking up the feats of Magellan, or Florence Nightengale. We might award prizes for the best essays on the subject.

Photos: Left Bob Reid with Pete Seeger with children gathered for Pete's October Hudson River sail in New York. Bob is shown on the left with one of his horses -- at the ranch near San Juan Batista where he works with horses -- when he isn't working with children in the schools or appearing in concert somewhere on the planet -- of in one case, leading the UN Children's Choir at the United Nations World Headquarters. Beautiful Bob is a great source of pride and the son that I often envy -- living out his dreams -- as bumpy as that road might prove to be from time to time.
Posted by Betty Reid Soskin at 12:22 PM No comments: