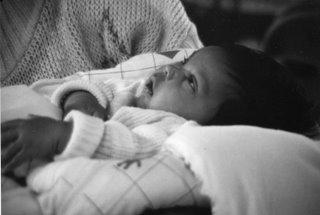 Noam Chomsky for president? Of course.

I suppose that there is more than one way to scrap the franchise or commit political suicide. Barbara Cottman Becnel for governor can only be followed by Chomsky for president. It's logical; a stroke of sanity in a sea of total madness. Unless the field improves and the Dems win back the house and/or the senate from those now in power -- that's precisely what I will do, come the next presidential race in two years. I'll vote on all of the initiatives and all of the lesser offices and commit the top of the ticket to my quest for sanity!

On the other hand, maybe we could make Chomsky secretary of state or a member of the Supremes ... now wouldn't that be something? And while we're at it, we could bring back Lani Guinnere as a replacement for Justice Ruth Bader Ginsburg when and if she decides to retire. She could neutralize Justice Clarence Thomas, hopefully. Someone needs to. Has that misplaced Justice ever submitted a written opinion?

Effects of vertigo? Perhaps. Spent long hours battling sleep last night -- mentally rearranging the government in the vain hope that there is still time -- and that this is at least one way to avoid nuclear destruction and save the world for my grandkids and yours.

Today we'll visit the de Young in beautiful Golden Gate Park -- try to find a new perspective among the azaleas and rhododendrons (maybe we'll see one of those magnificent blue herons in one of the many ponds). It's possible that, at least for a few hours, this feeling of absolute terror will subside.

Photo: My beautiful Dorian Leon Reid at 5 months. I hadn't yet realized the extent of her congenital brain damage, or, that she would never reach maturity. In a way, I suppose that my entire life has been spent subconsciously trying to leave a safe place for her in an unsympathetic world. The fear that I have failed in that mission grows as time winds down while she grows older and her future becomes more precarious. Emotions -- not being governed by intellect -- keep me ever engaged in the hopeless yet absolutely necessary work of fulfilling that dream.

Posted by Betty Reid Soskin at 11:49 AM No comments: 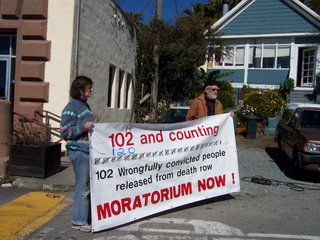 Hopeless? Maybe ... but that's no reason to bail.

I've voted without any reason to hope so many times over a lifetime that I no longer make any connection between those causes I choose to support and anticipated outcomes. One look at the total meltdown we're seeing in Washington, D.C., would suggest that there are an awful lot of us in the same position -- and that opting out simply isn't a choice. We simply have to be guided by conscience and principle and hope for the best. I must believe that justice, morality and reason will someday overtake greed, arrogance, and evil. Some things we do simply because we can't not.

Spoke briefly with some political colleagues this afternoon about Barbara's candidacy. She and I spoke briefly early in the day -- and I realized that the media is ignoring her presence in the race, totally. My friends looked at me with thinly-veiled good-natured pity and true generosity -- and I looked back with the same expression that I wear when I'm petitioning for my causes -- or staring down a prison guard at the gates of San Quentin. It's all an exercise in futility, and we all know it, but once committed ... .

During our brief conversation over some of the best scrambled eggs in town (soft and creamy with a dollop of sour cream, a raisin scone with raspberry jam at Bettie's Grill on Fourth Street) -- I felt the hopelessness grow. They were right, of course.

Barbara's daring challenge to the three major candidates for the governorship may be tilting at windmills, but it's all we've got. All three; Westley, Schwarzenegger, and Angelides are sworn to uphold the death penalty. They will not break ranks on this one. But they're not the problem. In the state of California the polling tells us that 70% of the people support capital punishment, and the chance for any candidate to be elected is dependent upon their doing the same. Our only chance is to change the hearts and minds of the electorate. Our only chance.

That would mean doing extensive education on the issue and expensive polling widely and often then having the ability to publicize poll results. It will be necessary to prove to the viable candidates that there is a constituency for a new position that supports a moratorium, at least. At the moment, there is not the funding, nor the time, nor the people power to make that happen.

...but I don't dare let myself become overwhelmed by an attack of common sense!

Photo: Co-demonstrators at the gates of San Quentin on one of the many times we gathered in the vain attempt to stop the execution of a prisoner. The plea for a moratorium until we can determine whether or not we may be putting the innocent to death continues to be ignored.

Posted by Betty Reid Soskin at 7:48 PM No comments:

Vertigo, or where oh where did I leave my sense of balance?

It appeared for a few days there that I'd spend the rest of my life with my head pointed in but one direction with no checking out those things beyond what front-face presents. What a miserable ailment this is! Had it once before -- no idea what caused it then nor what took it away. One day (about ten years ago), I woke listing dangerously and unable to stabilize. My body tended to follow my head -- and my head was on some kind of path unrelated to the rest of me. One quick turn of my head and the world would spin crazily! Miserable!

Having been blessed with the best of health for the greater part of life leaves me with no way to defend against such a random attack. What's left of my brain immediately begins to conjure up visions of strokes and heart attacks and any other wandering ailment I see advertised on the tube. Felt as if I'd gotten myself one of each of those side effects that get tagged on to the end of those pharmaceutical commercials. So much for that.

But vertigo may be stress related -- not bad stress, just stress. Since returning home I've been back in the thick of work -- the best kind, actually. Case in point:

Two weeks ago we drove to Sacramento to watch the panel hearings for grant applications. This was for Proposition 40 bond moneys for historic preservation. We'd (the park and the Rosie Trust) submitted a large grant that would enable us to restore one of the Kaiser historic sites -- the Maritime Child Development Center; the first 24 hour-a-day childcare center in the nation. The old building stands abandoned and has for most of the last 60 years. It was hurriedly constructed early in World War II without a foundation. The place is riddled with mold; has rippling floors and smells of putrid dry rot. However, in that building (and another such childcare center some blocks away) is a treasure trove of child-sized furniture, toys, tricycles, red wagons, wood construction blocks, cribs and desks, home made children's kitchen furnishings, all stacked as if the children walked away yesterday.

Once restored, it will become one of the scattered sites of the Rosie the Riveter/Home Front Historical Park, with at least one specimin classroom open to the public. The rest of the large building will be rented out to nonprofits -- one of which is an environmental program for teens. It's an exciting step toward the actualization of another piece of the park we're building.

Word came within 24 hours of our visit to the capitol that we'd been selected. That means 2 million dollars (to be matched) is now available to the city and the park with which to begin that work.

Funny, two years ago it would have concerned me that the child development center was created to make it possible for white women to be hired into the homefront workforce. Black children were not accepted, but were cared for the way they would have been in the south from whence they'd come. These were largely sharecroppers who'd come to the west coast to work in the shipyards -- and who would have had no expectation for childcare, so it mattered not. They came with a strong tradition of collective parenting, and it served them well in Richmond. It had to. Or maybe this was also the home of the nation's first latch-key children.

The park development's darker side surfaces and subsides in what is becoming a familiar pattern. That we're in the process of enshrining a period of racial segregation is important but only inasmuch as we do that without seizing every opportunity to reexamine those times and work our way carefully through the conflicts that rise to the surface as we work.

I felt the same thrill that my colleagues felt when that grant announcement was made. I was ecstatic and felt just as triumphant -- but perhaps for different reasons. Maybe what is different is the fact that I've begun to lose any sense of a separation from the rest of staff -- either in our intent or in how we go about the work of re-building this important chapter in the nation's history, together.

There's an openness and a willingness to honestly face the real possibility of providing answers to questions nobody's asking. At least that's true of those with whom I'm working at the National Park Service. We may be ahead of the community in that respect so that next weeks and months may have some unknown waters to navigate. I'm determined that important history is not papered over rather than confronted. It will be in those friendly (and maybe not so friendly) encounters that the learning and the atonement will occur. We must not miss this opportunity to lay those ghosts.

What happens if the scars are deeper than I know?
Posted by Betty Reid Soskin at 6:47 PM No comments: