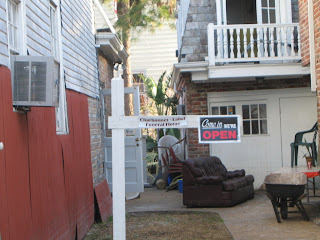 What a crazy couple of weeks this has been ... a time of contrasts.

And, no, I was not decked by that last entry. A little chastened and made thoughtful, but really not in the least offended. It brought a couple of healing conversations that helped to work it through and let it go. It comes with the territory, I'm sure. If one is as open about one's life process as I've become in these later years -- then there is an implied vulnerability that is inescapable. Life goes on.

Thanksgiving has come and gone, and with it renewed feelings of regret that my late son, Rick, was not with us. I still miss him dreadfully at times of celebration, but am no longer certain whether I'm still actively grieving, or whether I've forever locked myself into the silent loss that I rarely speak of aloud anymore. Holidays were always less than advertised since we never knew whether he'd make it as promised because his drinking suppressed his need for us toward the end of his life. All those years of waiting for the phone to ring -- wondering ... Now connecting that trauma with the aroma of turkey baking in the oven and released each time I open the oven door to baste the bird ... The missing is a very complex issue that is mixed with the love and relief that this particular form of waiting is over. Another aspect of the holiday.

If age has brought anything of importance to my understanding of family dynamics, it is that this kind of helpless pain is shared with wives, fathers, siblings, of every race, color, and ethnicity where the disease of alcoholism reigns. It is now impossible to look across a room anywhere and not see aspects of myself; especially where there is/was pain.

Maybe by Christmas this year, I'll find myself closer to the relief side of the equation.

But there were better things to relish over the past week:

The future looks truly exciting in that my online activities have allowed members of my Katrina-scattered family to find me, largely through the Internet. The mails brought an announcement of a 2009 Charbonnet Family Reunion to be held in New Orleans. I have so longed for this to happen, and now it has. Under the leadership of three members whom I've never met, we will spend the year re-connecting across the nation for the sharing of the stories and collecting the history. As one young cousin stated, "...you can't tell the story of New Orleans without the stories of the Charbonnets." Unimaginable, surely. After all, we date back to the 1700s, before the Revolutionary War, and when it was still only the Louisiana Territory. You have no idea how important that fact has become as I age -- and how grounded it has allowed me to become. Wish I could transfer some of that to my grandchildren, but life seems to dictate that we each find our own landing places, and theirs will be far different from my own, having been carved out by lives so different from the years of my tenure on the planet.

I'm looking forward now to a visit from the team of family researchers who will be coming in a few weeks to gather my stories (and to see my grandfather, Louis Charbonnet's, engineering text books that sit quietly on my little bookshelf). I'm hoping that someone somewhere has a photograph of my grandmother (and his wife) Victoria Morales Charbonnet whom I only remember as "Mamaire" (not sure of the spelling).

Then I'm reminded that it was in the process of researching my own family tree -- the frustration of not being able to learn anything about the women -- only through the men -- that I made the decision to chronicle my own life here for my children and grandchildren.

Photo: Photo taken by a friend, City Councilman Tom Butt who, as a member of a team of prominent architects, made an inspection trip to N.O. after Katrina. At my request, he photographed the Charbonnet-Labat Funeral Home - a family and New Orleans institution.

Posted by Betty Reid Soskin at 10:18 AM No comments: