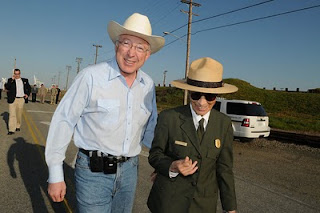 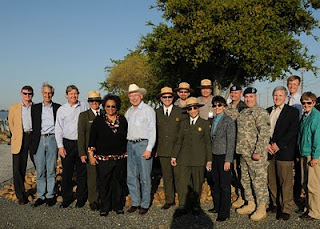 Early morning surprise and the remarkable day that followed ...

It was just another Monday morning until the moment that I walked into our offices to learn that we were to have a surprise visit from the (snare drums here!) Secretary Ken Salazar of the Department of Interior! The call had come in at about seven and the race was on. 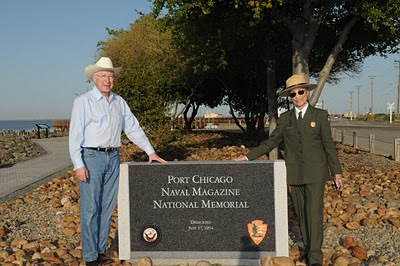 Ric announced while leaning into my cubicle, "Martha would like for you to accompany Tom to Buchanan Field in Concord to meet the Secretary for a tour of Port Chicago."

He and his staff (deputy secretary, press secretary, staff photographer, executive assistant, various aides - about ten in all) were in San Diego (at the southwest corner of the state) for meetings on water issues and was due to arrive in Redding (in the northern area) for related matters concerning a groundbreaking for salmon runs and more water issues about the Delta that evening and the next day -- when he decided that, since Port Chicago was somewhere in the middle between these locations,  he might as well touch down for an hour or so to see the newest unit of the National Park Service.

Had I known that any more was expected of me, I'd probably have been begged off. Tom admits that they decided not to give me anything to be nervous about so willfully neglected to tell me that after meeting his executive jet at the airport, the party would board our NPS bus for the 20-minute drive to the Concord Weapons Station and the Port Chicago Monument where I would climb out of my passenger seat next to the driver, and into the back of the bus with the Secretary and his staff, so that I could do an en route interpretation of the Port Chicago Story. 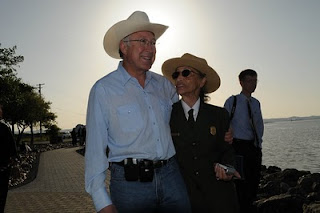 It might have been a disaster, but Secretary Salazar is about the kindest least stuffy man one might ever expect to meet. By the time it dawned on me that I'd been set up, I was already into my stories and it was just fine. He was wonderful, so easy to relate to that it was painless. He asked questions and I provided answers -- the best that I could. The fact that I was speaking from memory of the times rather then reciting something learned by rote from the literature, probably is what makes my thin little Port Chicago story so powerful. I've decided after expressing some reluctance to continue to act as an informal interpreter for this site, that Martha may be right. This is her claim, "Betty, you were there." He and I hit it off like old friends, and he's planning to return for this year's Day of Remembrance on July 17th.

Every VIP our staff could reach was at the base to meet us when we arrived. It was a magnificent day to remember always.

And I'm happy that no one told me in advance of the role I was expected to play. I would have been so nervous! As it was, I didn't expect so much of myself that I would have experienced disappointment in my "performance." Tom and Martha allowed me to simply be myself -- something that I'm discovering in these later years -- may be quite enough.
Posted by Betty Reid Soskin at 7:45 PM No comments: 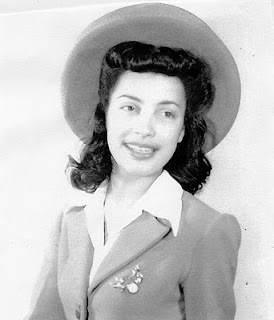 I loved the play. It was Maxwell Anderson's Winterset and I read for the role of Miriamne ... .

It was my junior year at Castlemont High School and I'd fallen in love with the movies. I must have been all of 17 and subject to dreams that soared! Being a movie star was the secret wish of every little girl I knew, no matter how far-fetched the idea might be. If all else failed, there was always Aladdin's genie to appeal to, right? And I had the kind of imagination that knew no boundaries.

Equally unlikely would be dreams of college for one with so few family role models to try to emulate . The assumption was that I would be Mel Reid's bride shortly after graduation. After all that was what pretty girls did, and when I look at photographs of myself taken in those years now, pretty was what I was. Successful girls were those who followed the traditional path -- and going to college usually was intended as a means of gaining access to potentially successful men. Independence for women was only important if one failed to attract a husband, preferably by your 21st birthday. I would be married by my 19th.

WWII had not yet exploded into a hot war and remnants of the Great Depression were still evident.

She must have been what today would be called a Progressive since this gritty Maxwell Anderson play was based on the Sacco-Vanzetti trials; controversial material for a high school class, surely. However, what happened would suggest that the politics of my drama teacher lacked the power to carry her to the place that would encourage acting on principle. I must have caused her great pain that day. 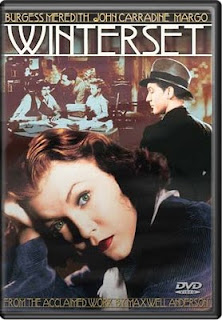 the part of the love interest, Miriamne, (I believe she was played by Sylvia Sidney in the screen version that I remember -- or was that "Street Scene"?) in a play with limited characters, almost all male. I loved the part and I'll always remember how quiet the room became as Eddie and I read from the second act of the script. I knew that we'd nailed it. It felt wonderful, and at some later time in history might have served to build momentum toward theater as a major. It was just too early in the struggles of the times.

When the period ended, the teacher passed my desk and dropped a note asking that I come back after the break. She needed to speak with me. I was convinced that she was going to praise me for my reading and (possibly) offer me the role in an upcoming production.

The bell rang and I approached her desk smiling; confident; feeling smug; maybe even cocky.

A red-faced obviously uncomfortable young teacher speaks: "Betty your reading today was truly wonderful. You and I both know that you would make a great Miriamne, but we also know, don't we, that there are parents who would be offended to see you paired with Eddie; because you're colored, you know ..." (her voice trailed off in embarrassment). I was not prepared for this, though once uttered, the obvious truth of her words was sobering; and devastating! How could I have ever dreamed of such a thing? Of course she was right. For those few days I'd gotten lost in the play. I'd simply forgotten.

Deeply hurt, I left the drama class and never spoke of the incident again. I registered the next day in public speaking. Ironic choice, though, since there was about as much chance of my becoming a community leader needing such skills as there would have been in theater.

But then there was Mr. Bill McLaughlin who conducted that class with a colorful larger than life personality that inspired great things in his students. He became the wind beneath my wings for the rest of that semester and through my senior year. Never underestimate the power of an inspiring teacher to reclaim young lives.

Kathy McCarty, Producer/Director of the Vagina Monologues, is not aware that this will be my "return to theater" after a 60 year absence!

Come if you can to the Craneway Pavilion in the Ford Point building on April 12th. There will be only one performance, but that's enough to satisfy this almost-forgotten dream. I didn't realize that it was still alive after all these years, or that this long-dormant ambition could be reawakened after six decades of suppression.

But there you have it. There is enough character in my role and I have enough sentences to allow me to feel fulfilled, and I'll be onstage with other actors for the duration of the play making a statement for Violence Against Women. It's not enough of a part to be taxing, and I've been assured that I can read my part and not need to memorize lines. I'll look smashing. We will all be elegant in "black with a touch of red," (perhaps in the form of a silk scarlet flower pinned low in my hair?).

It will be such a time!