It IS as suspected, once you find yourself on the world's radar, it becomes self-generating ... . 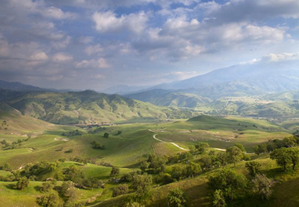 ... this honoring thing.  After your ninetieth birthday you begin to get awards for being able to tie you own shoes.  It must be, otherwise how do I explain this to myself:

Yesterday just ten minutes before I would be due in the theater to give my regular Thursday at eleven presentation our deputy superintendent suddenly appeared from our headquarters offices to whisper into my ear that there would be a delegation of ten officials from the National Parks Conservation Association arriving to attend my talk, and that they would be presenting me with an award at the end of my presentation.  (No pressure, right?)

As is usual, shortly after my Thursday morning arrival at ten through the rear entrance to the Visitor Education Center, more friendly strangers had begun to gather for the eleven o'clock ranger  program.  Ordinarily I immediately go to a front desk computer to collect the overnight accumulation of emails and ignore almost everything else until time to go downstairs to be miked-up for my talk.  This morning was no different.

I normally enjoy a kind of momentary lull during which thoughts are collected for another event.   About a half hour is spent sitting unseen at the Bay-facing windows behind a large exhibit to watch the lazily passing sailboats from the nearby yacht harbor, or the occasional daring wind surfer ...  before facing another audience.  Since I work totally from memory, extemporaneously, using no notes or script, the mood I bring with me into that room allows access to the memories I must again bring to life. It tends to work well, that is, unless something unusual upsets expectations.  And that is precisely what happened.

Yesterday, 15 minutes into my program, there was a temporary interruption after the arrival of 8 people from another special group which included 3 severely disabled people in wheelchairs escorted by attendants.  Everything completely stopped so that a few members of the audience might be moved so that some seating could be removed in order to accommodate those in wheelchairs.  Concern about the earlier "special" visitors was soon lost in the face of this new challenge.  Of course it was all easily handled by capable rangers, and we soon picked up where we'd left off just before ... .

The program soon got back on track after the adjustments had been made, and when it closed at the end of the hour the special delegation from the National Parks Conservation Association approached to present me with a folder containing a letter from Ms. Theresa Tierno, CEO and President, announcing that I'd

... We would be honored to publicly recognize your contribution by presenting you with the Winks Award at events planned for Wednesday, April ll, 2018 in Washington, D.C. "

By the time my talk ended with the Q&A, and the delegation from the Conservancy approached to make the presentation, it held all of the surprise factor that had been originally intended.  Somewhere in the middle of that unexpected interruption, I'd become so completely taken with the process of bringing those new folks into the room that any fears I'd been feeling had dropped away, and the room had become the blend of friendly strangers, as is ordinary to that space.

Despite the number of times this process has now been repeated I remain equally humbled and puzzled by the acclaim that has found me -- hidden away quietly in my small community -- doing work that (maybe) only I could do; do you suppose?  Work made possible through lineage from ancestors who were 'buked and scorned" at an earlier unenlightened time in our collective American past.

How grateful I've become for whatever triggers life has provided that allows me to give voice to those who came before.  As time progresses, and as it tapers down toward infinity, my connection with that dark past grows ever brighter and the more easily translatable.

Maybe it is that which deserves the recognition for which I've become the vessel ... .

Posted by Betty Reid Soskin at 11:57 AM No comments: