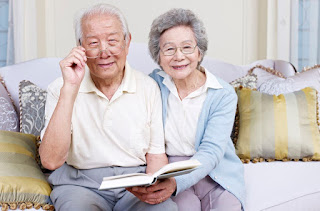 Saturday brought another of the occasional interviewers to the Visitor Educator Center ...

... but this one was a bit out of the ordinary in that his name was Brian Yochim, and he was from St. Louis; an academic.  He wanted to interview me for a textbook he's writing for psychiatrists and psychologists.  The Psychology of Aging is his subject, and I suppose those of us at the upper end of the Pyramid of Life are increasingly of interest since there are so many more of us now than ever before in history.  How these years are spent by those of us fortunate enough to reach this final decade with our cognitive functioning intact are quite the phenomenon.

I've suspected for a long time that much of the interest in my work tends to lie in the fact that I'm such a late bloomer.  Though I cannot say that I didn't work -- I'd been a stay-at-home mom for the first half only but after having helped to start our little family business in Berkeley until motherhood took over my life.  Didn't have my first significant formal job until I was almost fifty, and have been working ever since.  That the National Park Service hired me as a permanent park ranger at 85 continues to bring smiles to the faces of the elders who stop in, especially when I playfully suggest that they keep their resumes updated, "you never know when the call will come!"

In this interview which was not from the usual perspective -- but from a very different line of inquiry, I became more aware of the fact that I'm now living day-to-day out of context.  My world is peopled by the young.  That probably effects the way I look at life, because there is far more future and hope in those under fifty than above the half-century mark.  I'm guessing that life would look much different were I living in a retirement community among peers.

Found myself wondering how much our attitudes about growing old are "caught" from the setting in which we find ourselves?  Wondering how much power lies in external definitions of the nature of aging?  Is the dementia so prevalent among those over 80 due to contagion?  Is the fact that -- as I am realistically dealing with end of life issues -- I'm still moored to the present through the environment that is provided by my work -- is that what's making the difference?  Has the ghettoizing of the elderly been destructive to our well-being?

Had my annual physical mid-week and was curious as to why the physician wasn't guided by the state of my well-being rather than what I'm projected to be at 95.  No longer are certain tests done routinely.  No longer checking for cholesterol levels, for instance.  There are tests that get dropped off the schedule after a certain age.  No mammograms.  No PAP smears.  (Have I outlived my PAP, maybe?).  Just a great young doctor going into raptures of delight at how great is my continuing state of excellent health, no meds except for a 12 mg tablet to control blood pressure, no chronic illnesses; no arthritis, no diabetes, no, no, no ... .  He says, "My God, you're like a 60 year-old!"  So why is he not treating me like a 60 year-old?  Why is he suddenly taking my blood pressure in a standing position "because that's what we do after 75," instead of sitting down as my fine state of health should demand?  But that's what the doctor's manual says, as he showed me on his computer when I looked quizzical.

I live in Hilltop Village, about a 35 year-old low to moderate income housing development where there are children, young parents, middle-aged couples and singles, dogs and cats galore, and at least one parrot.  My work involves day-to-day contact with young rangers with varied life experiences and attitudes plus a few of those nearing retirement age having put in their 20 years.  All are firmly invested in NOW, and are deeply engaged in meaningful work.

Really, by the end of the interview I found myself with more questions than answers ... .

I wonder if Mr. Yochim went home scratching his head and wondering, too?

Posted by Betty Reid Soskin at 3:37 PM No comments: